"This country never was, this country never will be," begins the narrator of the new Slovak film Krajinka, accompanied by sweeping shots of a Slovak landscape - mountains, forests and rivers.
In many ways, the statement expresses the current reality of Slovak film making, a tradition so stifled during the 1990's that it sometimes appeared as if it had never existed. But if Krajinka turns out to be as popular as its backers believe it will, it could spark a revival in one of the country's richest forms of cultural expression. 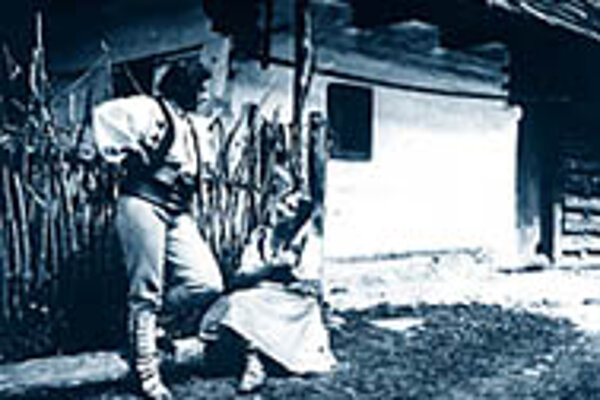 Font size:A-|A+  Comments disabled
"This country never was, this country never will be," begins the narrator of the new Slovak film Krajinka, accompanied by sweeping shots of a Slovak landscape - mountains, forests and rivers.

In many ways, the statement expresses the current reality of Slovak film making, a tradition so stifled during the 1990's that it sometimes appeared as if it had never existed. But if Krajinka turns out to be as popular as its backers believe it will, it could spark a revival in one of the country's richest forms of cultural expression.

The film, which is over two hours long and took four years to make, is the latest effort by Martin Šulík, the young Slovak filmmaker who many believe to be the country's finest film director. His 1995 film Zahrada (The Garden) won nine awards at 15 film festivals around the world.

"So far the film has met with a lot of audience interest and critical attention, causing us to anticipate more [international] awards," Slovak Culture Minister Milan Kňažko told the The Slovak Spectator. "This confirms that we made the right decision to support it."

This year the ministry has spent over 36 million Slovak crowns (ten million crowns more than last year) supporting Krajinka and six other films in an effort to revive the country's flagging film industry.

Film in Slovakia saw its least productive period ever in the 90s, with only 33 films made during the decade. During the previous four decades, Slovakia had produced eight to 12 films a year.

The poor results, said Kňažko, were caused in part by misuse of finances and resources by the former Vladimír Mečiar government, which gave money to film projects without checking to see where it went.

"In 1997 and 1998, for example, the Ministry of Culture gave financial support to Koliba studios in Bratislava for the movies Janošik and Knieža Pribina [neither of which was ever finished]," said Kňažko. "We ran a check and found that they hadn't fulfilled many conditions upon which the contract was based. We have since begun a legal suit against them."

According to industry experts, suspect activities have been rife at Koliba, Slovakia's main production facility, since its privatisation in June, 1996.

"We had a group of filmmakers who wanted to buy it, but we weren't given the opportunity," said Zuzana Gindl-Tatárová, scriptwriter and vice-dean at the film and television fakulty of Vysoká Škola Muzickych Umení (Academy of Music and Dramatic Arts - VŠMU).

"Unfortunately, the people who bought it were only interested in stripping assets. The laboratory and soundhouse were destroyed by misuse and thievery. It almost destroyed the entire industry."

Although not specifying persons or institutions, Kňažko agreed, saying that "corrupt interests destroyed the base for filmmaking in Slovakia. In no other country in the region was the basis of the film industry destroyed so drastically."

Compounding the Slovak film industry's difficulties was the relatively new task of having to raise funds privately. During communism, films were entirely funded by the government, whereas today, support from the ministry is only a fraction of what a filmmaker needs to complete a project. Money from private foundations or investors make up the rest.

"Today there are difficult economic conditions in all sectors. If a director wants to make a film he has to spend six months hunting for money," said Štefan Vraštiak of the Slovak Institute of Film.

"During communism there was money, but restrictions. Nowadays we see that it does little good to have artistic freedom without any funding," said Tatárová, shrugging her shoulders.

Both Tatárová and Kňažko agreed that the key to redeveloping the Slovak film industry was to create independent financial sources unconnected to the state.

"Next year we plan to set up a non-governmental fund that supports cinematography in Slovakia. The following year we plan to make some changes in the tax law and decentralise the industry as a whole," said Kňažko. "The future of Slovak film is not going to be as hopeless as it is now."

Some progress is already visible. In addition to Krajinka, Sokoliar Tomaš, a fairy-tale about a falconer, was released last spring and Hana a jej bratia (Hana and her brothers) is scheduled to premiere sometime in December, totalling three movies in 2000. In 1999, two original films were made in Slovakia, and in 1998, only one. Five new films are scheduled to be finished in 2001.

Despite the struggle in the 90s, film in Slovakia has a long and intricate history. According to Vraštiak, Krajinka was the 370th feature-length film ever made in Slovak, the first being the original Janošík, shot by two Slovak-Americans from Chicago in 1921.

But it wasn't until after WWII that movies began being made on a larger scale. With the advent of communism, film became an important tool for spreading ideology, garnering extensive support from the state. The first communist movies usually involved a hero that hesitated before finally siding with workers over capitalists.

Slovak film may have enjoyed its most productive period - both in terms of output and artistic value - during the 60's when artists were allowed more freedom. "It was the most ideal set of circumstances for filmmakers here," said Tatárová. "Restrictions were loosened and the government was pumping money into the film industry."

But after the occupation of Czechoslovakia by Warsaw Pact troops in 1968, Czech and Slovak directors were again put on a short leash. "The best directors were pressed into shooting films for the regime, or simply were broken in their pursuit of their goals and dreams," said Tatárová.

Because of repression, films under communism were often highly metaphorical, resorting to roundabout ways of expressing their views of life in Czechoslovakia. According to Tatárová, a classic example of this technique was Boxer a Smrt (Boxer and Death), by Peter Solan, in which a man in a concentration camp has to choose between fighting to the full extent of his ability and thereby risk angering the wrong people and losing his life, or conforming to the system - a metaphor for the choices faced under communism.

More recently many Slovak filmmakers, such as Šulík with Krajinka, have emphasised Slovak roots, history and traditional village life.

"I think it's nice that Slovak filmmakers have showed that part of Slovakia to the world, but I worry that they have ignored the other side," said Tatárová.

"Bratislava has always been a large, international metropolis, and many other cities in Slovakia are like European cities everywhere."