Prime Minister Mikuláš Dzurinda was so impressed with the investment of the German bearings manufacturer INA in the northern Slovak town of Kysucké Nové Mesto that he was moved to call it a "miracle of Slovak-German co-operation" at the factory's opening ceremony on September 14.
Dzurinda has not been alone in his assessment. Analysts and government representatives agree that INA's presence demonstrates how smoothly the much-criticised investment process can go in Slovakia, and provides a model for other foreign firms to follow.
"This has been very successful for the German investor, who appears to be very satisfied with the site, workers and environment," said Alan Sitár, advisor to the prime minister for foreign investments for Slovakia. 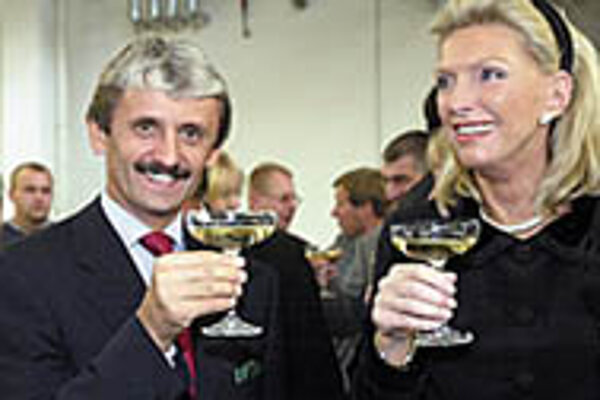 Font size:A-|A+  Comments disabled
Prime Minister Mikuláš Dzurinda was so impressed with the investment of the German bearings manufacturer INA in the northern Slovak town of Kysucké Nové Mesto that he was moved to call it a "miracle of Slovak-German co-operation" at the factory's opening ceremony on September 14.

Dzurinda has not been alone in his assessment. Analysts and government representatives agree that INA's presence demonstrates how smoothly the much-criticised investment process can go in Slovakia, and provides a model for other foreign firms to follow.

"This has been very successful for the German investor, who appears to be very satisfied with the site, workers and environment," said Alan Sitár, advisor to the prime minister for foreign investments for Slovakia. "This investment means a new inflow of capital, and more importantly, new jobs created. I think it is a win-win situation for both sides and a case-study on how well an investment in Slovakia can go."

INA's 4.5 billion crown ($90 million) investment means that within the next five years the company will directly employ a total of more than 1,000 people. This, in a region where 3,300 people were out of work at the end of August, for an unemployment rate of 21.2%.

The German firm had been on the verge of investing in Hungary when it was persuaded to settle in the Kysuce region after an incentives package was offered at both national and local levels. Government assistance came in the form of 15 million crowns for land, 20 million for the requalification of employees and an additional 3.6 million crowns waived for customs duties on equipment imports.

Much of the bureaucracy was dealt with on a local level.

"Acquiring the land from the citizens was a chaotic process," explained Kysucké Nové Mesto Mayor Peter Dúbravay. "The land is not very suitable for agriculture and the owners were difficult to track down, so we helped with this. And with help from the state, we were able to sell the land at a good price and entice the company to invest." It only took eight weeks for the land to be set aside after INA declared its intentions to invest.

Once INA officially committed to the region, the process continued on a smooth, quick path. The building foundation was laid on July 21, 1999, test operations began in March 2000 and the plant's official opening was held on September 14 - just over a year after the cement was first poured.

INA said the success of the investment was due to the efforts of both the German and Slovak sides, as well as to a fully thought-out development plan for which contractors met all their obligations on time.

"The speed at which this project developed is unmatched in the Kysucké region," the company said in a statement. "Within a year, our new product lines began to roll out of our new manufacturing halls."

Sitár felt one key to the project's success had been that INA took the right steps and did not come in with expectations that were greater than what was possible. The company came to a clear agreement with the government, Sitár said, and both sides adhered to that deal.

"I wouldn't say that the company did anything specifically special, there is no INA 'recipe'. I would say it was an issue of cooperation between the government and the investor, a clear expectation from the beginning and fulfilment of mutual obligations," Sitár said, adding that by using local assistance and understanding the Slovak environment, INA had helped itself.

Karol Balog, general director for the Agency for Industrial Development and Revitalisation (AIDR), said he had been quite surprised by the success of the INA investment.

"Actually, I am amazed at how well this went. The company must have done everything exactly the way that it is supposed to be done, because every other foreign investor I know of has encountered greater or smaller difficulties on their course to establishing their businesses here in Slovakia. Even if they are finally successful and producing, most companies really don't have fond memories of the first days, weeks or even year."

With operations now underway, the effects of INA's presence in Kysucké Nové Mesto -500 new jobs - have already been felt. Before the German manufacturer came to the region, the majority of the population earned their livelihood from the struggling roller-bearing manufacturer KLF-ZVL (with which INA has since developed cooperation).

Mayor Dúbravay was sceptical about the future of the region had INA not come to the rescue. "This investment has significant importance for the region in boosting the economy. The region was struggling with nearly 30% unemployment, and the town and the companies were falling apart. The only company keeping the town alive has been KLF-ZVL, a company with no hope for further development. If KLF-ZVL were to close and INA wasn't here, it would be a catastrophe for the people who live here."

Balog said that on top of the immediate benefits of lowered unemployment and an economic boost, INA's investment also has a ripple effect in bringing in local business to support the main factory.

"A lot of Slovak firms look to be attached somehow to foreign investors, most notably the good ones - those that are streamlined, who know what they want and are honest in their business," Balog said. He added that other potential foreign investors keep a close eye on the struggles and successes of those already here, and success stories only make the country more attractive.

Despite the positive impact of INA on the region, the investment has awoken further concern over the partiality the government seems to be showing towards large foreign firms at the expense of local producers.

Emil Machyňa, chairman of the KOVO steel-makers trade union, raised the point that government assistance should be spread amongst all companies, not just large foreign firms.

Mayor Dúbravay agreed, saying that too much foreign investment can "drown" out local business, and that the national government should focus on creating a balance between domestic and foreign firms. "Wealthy foreign investors are eligible to receive the incentives, while many of the smaller domestic businessmen are ignored. It has both a moral and economic effect when everything in town is owned by foreigners," he said.

Sitár said a government package that would define benefits available to all firms - domestic and foreign - fulfilling specific conditions was currently in the works. Such benefits would be offered in conjunction with local authorities, and would come in the form of tax support, retraining of employees and land. Sitár said the proposal was currently being discussed and should be operational in early 2001.

However, Machyňa also expressed concern that the government was not focusing its efforts on reviving regions plagued by unemployment, and argued that the level of assistance offered to businesses should be adjusted according to regional needs.

"Where there is a high rate of unemployment along with lagging infrastructure or conditions that don't attract foreign investors, such regions have to offer incentives much higher than the standards in larger cities such as Bratislava, Trnava, and Piešťany," Machyňa said.