A lack of interest from potential entrants to the Slovak mobile telecoms market has cast serious doubt on the price the state could get for a UMTS mobile phone licence, which is normally a lucrative money spinner for governments in other countries.
With the Ministry of Finance hoping to draw the kind of interest that has already been seen in the Czech Republic's sale of UMTS licences in 2001 (Prague has said it is hoping to issue possibly four licences in an auction for next year and rake in 30 billion Czech crowns) analysts are already warning that next year's planned granting of a single licence in Slovakia could be a relative dud. 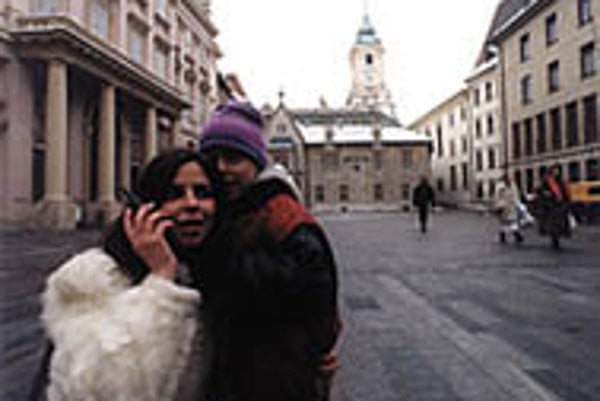 Font size:A-|A+  Comments disabled
A lack of interest from potential entrants to the Slovak mobile telecoms market has cast serious doubt on the price the state could get for a UMTS mobile phone licence, which is normally a lucrative money spinner for governments in other countries.

With the Ministry of Finance hoping to draw the kind of interest that has already been seen in the Czech Republic's sale of UMTS licences in 2001 (Prague has said it is hoping to issue possibly four licences in an auction for next year and rake in 30 billion Czech crowns) analysts are already warning that next year's planned granting of a single licence in Slovakia could be a relative dud.

"Big telecoms firms are already financially weighed down by their activities in UMTS markets in other countries, and Slovakia is not exactly one of the prime markets that would be targeted by any of the big international telecoms firms anyway," said Dušan Meszáros, telecoms analyst at Commerzbank Capital Markets in Prague.

Claiming that the future of the sector in central Europe is wide open, but reluctant to express serious interest in the Slovak telecoms market, which analysts have said is relatively unattractive in comparison with those of neighbouring states, telecoms firms are already playing down the Slovak sale.

Telecoms giant British Telecom, which has focused its pre-liberalisation efforts in central Europe on Hungary and the Czech Republic, told The Slovak Spectator that while the company "remains very keen to view seriously any territory we feel where there would be good strategic value", there were no plans to open offices or increase business activity in Slovakia ahead of market liberalisation in 2003 and the sale of the UMTS licences.

The company's plans for Slovakia contrast sharply with its activities in neighbouring states. With full market liberalisation in Hungary due next year, the firm has said that it would be interested in "all areas" of the market, including the GSM and UMTS mobile markets, and retains a representative office in Budapest, opened "in preparation of the Hungarian telecoms market's liberalisation".

Dutch firm KPN, which had pulled out of the running for the state's 51% stake in Slovenské telekomunikácie (ST) in August amid concerns over its ability to develop mobile phone services in the future, has rejected any return to the Slovak market.

"Right now I cannot see that we would go back into Slovakia," said Carla van Lomwel, spokeswoman for the firm. "We are still interested in markets in central and eastern Europe where we have a presence already, such as Hungary, but we want to focus on our main business areas, such as the mobile phone market, in other regions." Van Lomwel added, however, that KPN would be working hard to develop its existing stake in Pannon, the GSM operator in Hungary.

The sale of an operators' licence for the UMTS phones, which employ technology allowing electronic data to be transferred even more quickly than current fixed lines, and which add sophisticated multi-media capabilities to mobiles, should be among the most financially lucrative activities a government can undertake in any sector of the economy. Recent sales of licences in the UK and Germany drew enormous interest, with the April licence auctions in London attracting $35 billion in bids.

Any licence auction in Slovakia however, regardless of whether sector behemoths such as BT or KPN take part, is not expected to reap such a windfall. Technical developments in the global telecoms market and other factors (see sidebar this page), say analysts, should limit the money the offer would bring in.

"Any interested firms would have a clear valuation of the market [potential and licence price] and won't be paying any more than that. And that price won't be enormous," said Boris Kostík, telecoms analyst at Slávia Capital brokerage house in Bratislava.

The important licence issue has already been dogged by controversy. Deputy Telecoms Minister Dušan Faktor said earlier this month that his ministry was looking to grant three licences for third-generation UMTS mobile telephones in late 2001. However, two licences would be granted to existing mobile operators Globtel and EuroTel, he said, while a third would be offered without a tender of any sort - a move that many observers say could endanger transparency and open a conflict between the finance and telecoms ministries.

"The Ministry of Finance will be pushing for an auction to bring money in - that will be the approach they want to take," said Kostík. "There is, I'm sure, a hot debate raging in the Telecoms Ministry right now about what to do with this licence, but the Finance Ministry will want the money [from an auction]," he added.

Faktor has tried to distance himself from his own earlier comments, claiming that no decision has been made on the method of granting the third licence. The deputy minister said that there are fears that if a high price is paid for a licence, the payment made for that licence would be recouped by the operator through higher customer charges. However, the government is acutely aware of the dangers of using untransparent practices, and wants to avoid the fall-out that the Czech government recently incurred with the granting of a third GSM mobile operator licence in what analysts have described as a 'beauty contest'.

The firm Český mobil won the licence as bidders offered a package of price and service guarantees to the government rather than just the highest price, as in an auction. Following the win many of its competitors accused Český mobil and the Czech government of a lack of transparency in the bidding and rivals claimed that Český mobil's package was not the best on offer and that personal connections and interests within the Czech telecoms ministry had been at play in sealing the deal.

"Some arguments against holding just a tender are really quite genuine. It can be financially draining on a bidding company, and if there is a tender or auction the customers will end up feeling the price of that somewhere along the line. But the main thing about any tender is that it is completely transparent, there are no 'beauty contests'," said Ondrej Datka, telecoms analyst at Patria Finance in Prague.

"There should be no problem per se with a beauty contest, if it is carried out in a clear and transparent fashion," said Commerzbank's Meszaros. "But they do offer more opportunity for possible untransparent practices," he added.

The Slovak government will also be looking to avoid having another mobile phone licence sale tainted with allegations of corruption, following the 1999 collapse of the sale of a third licence for the second generation GSM network. In July that year, then-Telecoms Minister Gabriel Palacka controversially scrapped the tender for the third operator's licence, splitting it between the two existing operators, Globtel and EuroTel. The minister later resigned over the affair amid criticism in the media and the coalition over his decision.

Hungarian Coalition Party leader Béla Bugár said at the time that "the decision of the minister [to abolish the tender commission] was neither good nor sufficient... this government doesn't need even the shadow of suspicion that some members of the government could be mixed up in corruption."

But Sasha Strameus, service marketing manager for the Czech Republic and Slovakia at mobile phone giant Nokia, said that while the argument for transparency may be important for any government offering a licence, the cost to the end user could stifle development of the mobile market.

"It would be in the best interests of the customer to have something along the lines of what we saw in Scandinavian countries, where firms offered the governments there a 'package' offer, not merely a high price, to win the licence. If we have something like the auctions in Britain or Germany we would see that price of the licence handed down to the end-user," Strameus explained.

Deutsche Telecom, which through its acquisition of fixed-line monopoly operator ST now holds a controlling share in Slovak mobile operator EuroTel, said that the price that any customer may pay when using UMTS is still some way from being determined.

"It is just too early to talk about the prices in any UMTS market. It would be foolish to speculate about any prices customers would pay," a spokesman for the firm said.