Doctors hunger strike to back reforms

Armed with angry words, fruit juice and hectolitres of mineral water, a group of about 20 Slovak doctors launched a hunger strike in the shadows of the Slovak parliament building on September 12 to demand better working conditions and higher wages.
For four days, the white-clad doctors refused to eat and distributed leaflets to passers-by during the daytime, sleeping on ground pads in their khaki military tent at night. As members of the Slovak Doctors' Trade Union Association (LOZ), they said that they saw no other way to achieve change. 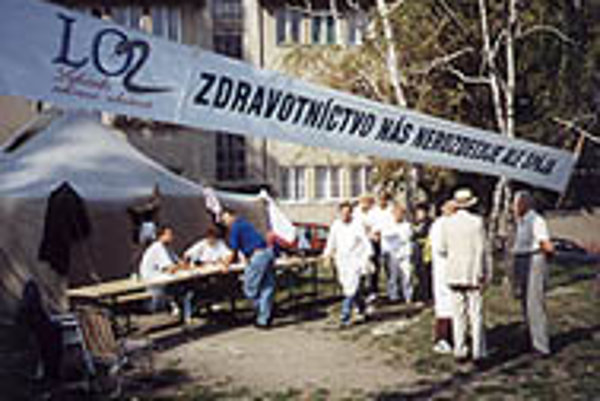 Font size:A-|A+  Comments disabled
Armed with angry words, fruit juice and hectolitres of mineral water, a group of about 20 Slovak doctors launched a hunger strike in the shadows of the Slovak parliament building on September 12 to demand better working conditions and higher wages.

For four days, the white-clad doctors refused to eat and distributed leaflets to passers-by during the daytime, sleeping on ground pads in their khaki military tent at night. As members of the Slovak Doctors' Trade Union Association (LOZ), they said that they saw no other way to achieve change.

"We have come here to protest against state authorities for their neglect of the acute problems facing the Slovak healthcare sector," said Vladimír Oceľ, a traumatologist from the eastern Slovak city of Rožňava. "The nation is sick, and we don't have the tools to treat the people."

The hunger strike was halted September 15 after the Parliamentary Health Care Committee told the doctors that their demands would be heard, and that Health Minister Roman Kováč would lobby for more funds to be allocated to the strapped medical sector. While the strike has yet to achieve any concrete results, doctors said they were happy at least to have grabbed the government's attention.

The doctors' trade union complained that Slovak hospitals are under-staffed and lacking necessary medical equipment as a result of years of neglect and underfunding. No wonder the country could not care adequately for President Rudolf Schuster, protesting doctors said, when he suffered a perforated colon in late June and had to be flown to Austria for treatment. Under current conditions, they added, doctors are often helpless to treat their patients.

"We lack medical equipment at hospitals, and often have to wait for weeks to have broken equipment fixed," Oceľ said while lying on his make-shift bed 100 metres from parliament. "There is no money to pay for the machines when they need fixing."

The trade union wants the government to increase health care sector salaries to three times the national monthly average (now around 11,000 Slovak crowns - $220) by the year 2004. They also want the government to increase health care funding and begin sector reforms, which they say have been stalled "for lack of political courage" by the past two governments. Many of the reforms require fundamental changes to the country's pension and health insurance systems, but have run aground on the "right to free health care through medical insurance" enshrined in Article 40 of the Slovak constitution.

Statistics support the doctors' claim that not enough money is being spent on the Slovak medical system. According to a study conducted in 1998 by the OECD, the Slovak Statistics Office and the Slovak Finance Ministry, Slovakia allocated only 6% of GDP towards the health care sector that year, or $225 per capita. In neighbouring Austria, 7.9% of GDP was allocated ($1,813 per capita), while in Germany the figures were 10.4% and $2,363 per capita. Unless the government met their demands, union reps said, the country would continue to have one of the poorest medical systems in Europe.

On top of calls for more support for the sector, the doctors also want more money for themselves. "These are absolutely inappropriate wages," Oceľ said. "I have 18 years of experience and I earn 14,000 Slovak crowns ($280) a month before taxes." His colleague standing nearby agreed: "Who would be willing to work under such conditions?"

Trade union head Marian Kollár, who organised the hunger strike, said that Slovak doctors were paid far less than their counterparts in neighbouring countries and in the West.

Despite the promise of parliament to take up the doctors' complaints, their demands for higher wages have already been questioned by Health Minister Roman Kováč. "There are doctors who earn up to 200,000 crowns a month," he said September 13, adding that doctors generally made more money than they legally claimed because they received extra money for night-time and emergency shifts.

"My gross wage is 11,200 crowns after 12 years in the profession," disagreed surgeon Ervín Chomča from Galanta. "If I didn't work the extra hours, I would only be making 7,500 crowns."

Ladislav Petričko, head of the Slovak Chamber of Doctors, said there are 230,000 Slovaks employed in the nation's health and social services sector. These people, he told The Slovak Spectator on September 18, were qualified and willing to work hard, but were forced to live in "total misery" due to their meagre salaries.

Kováč said if doctors wanted an increase in salary, layoffs would likely be the only solution. "If we want to increase wages for doctors, then we'll need to cut the staffs in hospitals," he warned.

Kollár said that such a move would injure the ailing sector even more. "People no longer want to work for charity," he said. "The current Slovak health care system is not in a state suitable to enter the third millennium. It's already five past midnight, something has to be done soon."

The Parliamentary Health Care Committee appeased the protesters by pledging support for the doctors' demands in a September 15 resolution. The committee called upon Minister Kováč to respond in writing to the trade union's demands by September 28, and recommended that the minister demand the state raise health care sector wages and pay off outstanding debts to health insurance companies - debts that for years have fuelled a chronic shortage of money in the sector.

Although neither Kováč nor his press department returned phone calls placed by The Slovak Spectator, Kollár said he was happy with the results of the hunger strike.

"We ended the strike as a result of our discussion with the parliamentary health committee. We found understanding for our case among the MPs," Kollár said. "The committee said they fully understood the reasons which drove us here, and said they would require the minister to take a stand in parliament and to secure an increase of wages for health sector employees."

He added that although Kováč had refused to meet with the doctors, "during our meeting with the representatives of the Slovak Democratic Coalition (SDK), the strongest ruling coalition party [of which Kováč is a member], they promised an improvement. Who else can we believe if not the words of our MPs and the health committee?"