Schuster accuses coalition of writing him off prematurely

President Rudolf Schuster may have recovered in body from his summer bout with a perforated colon and pneumonia, but in spirit he remains bitter at the government's response to his illness.
In an interview published in the German daily paper Süddeutsche Zeitung on September 14, Schuster accused the coalition of having taken over his presidential powers prematurely on July 3, for all that he had been transported in a coma to Innsbruck, Austria on June 28 and had been unable to carry out his duties. The aim of the government, he theorised, had been to take away his power to call a controversial referendum on early parliamentary elections that might end the government's term in office. 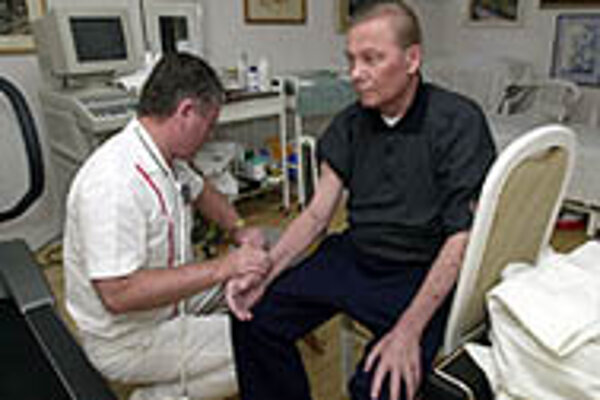 Font size:A-|A+  Comments disabled
President Rudolf Schuster may have recovered in body from his summer bout with a perforated colon and pneumonia, but in spirit he remains bitter at the government's response to his illness.

In an interview published in the German daily paper Süddeutsche Zeitung on September 14, Schuster accused the coalition of having taken over his presidential powers prematurely on July 3, for all that he had been transported in a coma to Innsbruck, Austria on June 28 and had been unable to carry out his duties. The aim of the government, he theorised, had been to take away his power to call a controversial referendum on early parliamentary elections that might end the government's term in office.

"While I was fighting with death on that airplane [to Innsbruck], the only concern of the government officials flying with me was to get a confirmation from doctors of my inability to carry out my duties," said Schuster. "The professors in Innsbruck were amazed and asked me: 'What kind of country is that [Slovakia]?'"

"It's possible that the coalition wanted to bury the referendum question," the president continued. "One thing is certain, if I hadn't been taken to Innsbruck, I would have died in Bratislava."

The accusations appeared to catch the government off guard, and it was not until September 20 that Prime Minister Mikuláš Dzurinda officially responded.

While Schuster's accusations against the cabinet were "very unfortunate and simply untrue," the prime minister said during a press conference, "I'm not interested in getting into a conflict with the president, no matter how the gauntlet was thrown down."

But unofficial reactions to the Schuster interview appeared as early as September 15, and were largely critical of the president for damaging the country's image abroad and showing a poor understanding of the law as it affected his office.

Béla Bugár, head of the Hungarian SMK party, said that "the president has to realise that whether he likes it or not, he is creating an image of Slovakia, and his statements are followed in the world mass media."

Ivan Šimko, a close Dzurinda supporter within the ruling SDK party, said that Schuster's words "hurt me a little, and I think they were maybe said under the influence of his illness."

The crux of the president's objections to the government's behaviour seemed to be a clause in the Slovak constitution (Article 105, paragraph 2) which says: "If the president is unable to carry out his duties for more than six months, the Constitutional Court of the Slovak Republic will declare his office vacant." Asked by Süddeutsche Zeitung reporter Michael Frank why the coalition had not allowed the full six month term to expire before taking over the president's powers, Schuster responded: "In Bratislava they simply didn't want to wait. For them, there [the government in Bratislava], I was already dead. Behind the scenes they were already choosing a replacement for me and counting the votes."

But as coalition officials and political professionals pointed out, the constitution also contains a clause (Article 105, paragraph 1) which says that "In a case where the president... has been unable to perform his official duties, the powers of the president shall devolve to the government of the Slovak Republic." It was under this authority, officials argued, that they had taken over important powers such as the right to sign laws into effect, in order that the function of the government and parliament not be impaired while Schuster was ill.

"It's a well-known fact that Dzurinda and [Speaker of Parliament] Jozef Migaš were under pressure from the public and the media to carry out their contitutional roles and take over the powers of the president," said Grigorij Mesežnikov, president of the Bratislava think tank Institute for Public Affairs (IVO). "Furthermore, the first [Schuster's] interpretation [of the contitution] is not correct - the government has to act immediately [to take powers], and then after six months, if the president still cannot carry out his duties, new presidential elections are called."

This is not the first time that Schuster has lashed out against public officials since his illness, during which, it was later discovered, Slovak doctors had made serious professional mistakes that resulted in the resignation of Health Minister Tibor Šagát. Shortly after his return to Slovakia, Schuster said of the Slovak health care system that "we're worse than Albania," a remark that caused much consternation among doctors.

So far, members of the government have shown forbearance for the irascible president, with Deputy Prime Minister for European Integration Pavol Hamžík saying September 17 that "the president was in a very complicated situation, and most likely he has had to deal with things during his convalescence that have been very hard for him. We have to show understanding for this."

But political professionals agreed that the comments Schuster delivered to the German daily had exceeded what the coalition was willing to tolerate in silence. "These comments can complicate the domestic political situation because he [Schuster] indirectly cast doubt on the government and the speaker of parliament," said Mesežnikov. "They [the coalition] are waiting to see how the situation develops, if he [Schuster] will continue with critical comments, or if he will make it plain this was just an isolated episode."

While Schuster has yet to officially comment on the interview, many of the things he said were similar in tone to his past statements on the importance of his being an independent, rather than pro-coalition, president.

"I'm a democratic president and no servant of the coalition," he told Süddeutsche Zeitung, "even though I helped them win power... I want to unite this country. The coalition still has a lot to learn."