Just two weeks ago, the government's strategy of ignoring the November 11 referendum on early elections looked like a safe bet. By calling on their voters not to show up, the ruling coalition had every reason to believe that the plebiscite would not attract the 50% of registered voters it needs to be valid.
But suddenly, with the head of the country's largest non-parliamentary party throwing his weight behind the opposition-sponsored plebiscite, the outcome looks far less certain. 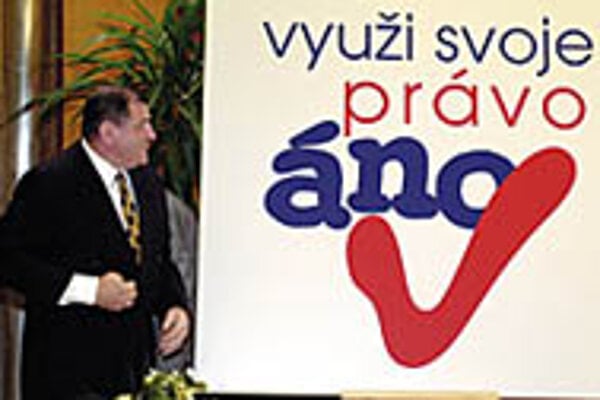 Font size:A-|A+  Comments disabled
Just two weeks ago, the government's strategy of ignoring the November 11 referendum on early elections looked like a safe bet. By calling on their voters not to show up, the ruling coalition had every reason to believe that the plebiscite would not attract the 50% of registered voters it needs to be valid.

But suddenly, with the head of the country's largest non-parliamentary party throwing his weight behind the opposition-sponsored plebiscite, the outcome looks far less certain.

Róbert Fico, the head of the non-parliamentary Smer party, which has a voter base of around 20%, publicly anounced his support for the referendum last week. "We made this decision based on the demands of our voters, members and supporters," Fico said on September 9. "I myself will vote for early elections." He told his voters, however, that they should vote as they wished.

"The president should always serve as an example to other people, despite his previously expressed hope that the referendum will be unsuccessful," said Leikert. "That's why I believe that he will go to the referendum. How he votes, however, is his own matter."

Despite the fresh support the referendum has attracted since being announced, political analysts still said the government's position was strong. A poll conducted by the Focus agency between August 8 and 16 - weeks before Fico and Leikert made their announcements - suggested that the referendum would attract less than 50% of voters. According to the results, 26% of respondents were determined to vote, while 16% said they would probably vote.

Grigorij Mesežnikov, head of the Institute for Public Affairs think tank in Bratislava, said the referendum could still be considered "much ado about nothing" despite recent developments.

He went on to admit, however, that Fico's decision to support the vote had caught him off-guard. "Fico's reaction was a surprise. He's skating on very thin ice now, and risking more than the [opposition] HZDS because he has now become one of the [opposition] referendum supporters and he has shown a bit of his party's direction," Mesežnikov said.

The government's policy of ignoring the referendum is, according to Mesežnikov, still a sound approach. "The good news for the coalition is that most Slovaks are still sceptical towards the referendum," he said.

The government coalition, for its part, is doing everything it can to keep voter scepticism at a high level. Prime Minister Mikuláš Dzurinda, speaking in response to Fico's decision, said that he believed the Slovak citizenry would weigh the virtue of early elections more carefully and with a greater sense of civic duty than Fico and HZDS boss Vladimír Mečiar.

"[Smer] has lost its direction ['Smer' translated into English means 'direction' - ed. Note] and now it is just wandering about," he said. "I believe that citizens will show more responsibility than the ambitious Fico and Mečiar."

By the word 'responsibility', Mesežnikov explained, the government meant voters to understand their duty was to stay home on November 11. Given that polls showed around 7% of government supporters intended to participate in the referendum, he said, it was possible that even this small group could give the referendum the necessary amount of votes to make the results valid. "These people should stay home," he said.

Judging by word on the street, most government supporters plan to do just that. Dorota Sadovská (27) said "the referendum is Mečiar's affair, not mine." Ľubomír Adame (70) agreed. "The referendum would only destabilise the country and cost a lot of money," he said. "That's why I will not go to it."

Zdenka K., a 53-year old bank clerk in Bratislava, said that she would not participate in the vote because she feared a return of the former government of Vladimír Mečiar. "I will not attend the referendum because we cannot allow Mečiar to come back again."

Mesežnikov concluded that although the opposition parties would campaign hard over the next two months for voters to turn out, there was little real threat that the referendum would be valid.

"We obviously cannot expect that 100% of HZDS, SNS and Smer supporters would either go to the referendum or support early elections in it," he said. "So even if government coalition is not able to convince all their voters to stay home, they still have some reserves."