Many of us believe that to find something truly 'different' in life we have to travel thousands of kilometres to distant lands and peoples. The truth is, however, that this 'otherness' often lies close to hand, part of our everyday world that we have somehow never really noticed.
In Slovakia, this forgotten otherness is the Romany community, or rather the 600 Romany settlements scattered across the country, where people have lived for decades almost in isolation from our world.
This past July, I decided to spend a month living among the Romanies of the village of Jarovnice in eastern Slovakia. The village is known for its children, who are exceptional painters - and who died in droves during the devastating floods that swept the settlement in the summer of 1998. 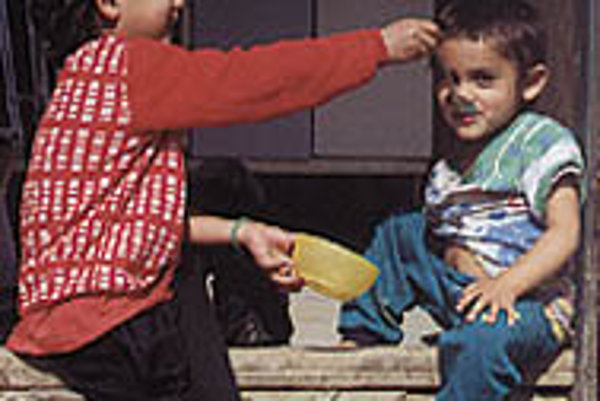 Font size:A-|A+  Comments disabled
Many of us believe that to find something truly 'different' in life we have to travel thousands of kilometres to distant lands and peoples. The truth is, however, that this 'otherness' often lies close to hand, part of our everyday world that we have somehow never really noticed.

In Slovakia, this forgotten otherness is the Romany community, or rather the 600 Romany settlements scattered across the country, where people have lived for decades almost in isolation from our world.

This past July, I decided to spend a month living among the Romanies of the village of Jarovnice in eastern Slovakia. The village is known for its children, who are exceptional painters - and who died in droves during the devastating floods that swept the settlement in the summer of 1998.

I called Dezider Lacko, a member of the municipal council, and explained to him what I wanted to do; without being asked, he offered me accomodation in his house. I was the only non-Romany in the settlement for that month, and while I was initially anxious about how I would be received, the Roma took me in to their community with open hearts.

I've been asked since if I felt safe. I have to say that's a very typical question for this country - if we are robbed by someone, we don't care if he's Slovak, Hungarian, Russian or Ruthenian, it's enough that he's white. But if he's Roma... I'm only 22, and luckily I don't have any prejudices in this regard, but I live in a society which has so many prejudices it could give them away.

Candies and leaders in short supply

So there I was, sitting in the early morning on Lacko's 'stoop', reading the statements of an American billionaire named Donald in the newspaper. "People need $60 million in their lives," Donald said. "$20 million for a house with a pool, golf course and fleet of cars, $20 million to take care of this stuff and $20 million to cover living expenses. The rest you can give to charity." On my way back from buying the paper at the post office, a five year-old child had given me one of her two candies. I wonder if Donald is better off with his pool and golf course.

Then I find myself in Lacko's kitchen. Music from the Mexican soap opera Rosalinda, which the family has recorded from the TV show, is playing on the stereo. Four year-old Béla is asleep with his head a foot from the speakers. Apple wine is on the table, and I'm drinking to something with Jožo, one of the postman's eight brothers. The postman himself takes a bowl of rice and chicken out of the cupboard for me. The postman's mother is the aunt of Mrs. Lacko.

Suddenly, over the sound of Rosalinda's voice I hear the words 'Martin Luther King'. Jožo is talking about MLK, about how the Roma lack such a figure. I think of the segregated Jarovnice pub, of one elementary school here which has been purely Romany since 1993, and of another which has been purely white since the same year. Of segregation on the bus to the nearby town of Sabinov, where Roma sit at the back and whites at the front, about how white adults chase Romany kids from the football grounds, about the fact that almost no Romany kid has a white friend. And about the 16 Romany political parties in this country.

My host, Mr. Lacko, celebrated his 50th birthday while I was there. His house has two rooms - a kitchen where we dance, and another room where we eat and drink. Mr. Bača, from the Prešov regional government office, has just arrived in the Roma settlement. He is accompanied by a girl from some foundation and a pleasant-seeming American. The birthday-man invites them to join us, and in a few minutes we are all drinking peach vodka and toasting Mr. Lacko's health. Another small barrier has been broken down.

I find myself sitting beside Lacko's sister from Poprad. She is visiting the settlement with her grandson for the first time. He's a little bit 'gadžo' (the Romany equivalent of 'gringo'), and I understand his shyness. But a few minutes after being introduced to his cousins, he's one of the family.

The day after, I ask Mr. Lacko how many grandchildren he has. He counts his way up to 18, and then stops to ask me if I think that's a lot for a man of 50. A few minutes later a group of children run past, and Mr. Lacko revises his count to 25 with sadness in his voice.

It's now evening again, three days before social benefits are paid. One of the eight Romany town councillors comes to me and very bashfully asks for a loan. It's his sister-in-law's birthday, and he doesn't have any more money. I don't lend him any, because there will be no opportunity for him to return it. But I ask him why, when others manage to make their money last the whole month by saving and being careful, he can't do the same? He doesn't know.

Time here means yesterday and today. Especially today. No tomorrow, day after tomorrow and absolutely no next month or next year. The Roma's understanding of time admits no future. What we have we give, they say; when we have it we live, here and now, in this moment.

This understanding of time is the source of much loan sharking among the Roma.

Every morning I go with a key to the common latrine. The key is always handed to me by a grinning Hanka, the mother of Béla. But this morning she's not here. I ask after her, and learn that she has gone to her mother's because her husband beat her up. Why? Jano, her husband, says it's because she smacked Béla again. Béla luckily hasn't hit anyone, he just wasn't obeying his mum. The next morning Hanka is back to give me the key, holding her hand to her face so I can't see her black eye.

As a young bride, she came to live with her mother-in-law, in order to acquire every skill it was felt she would need to be a good wife to the son. She always got the hardest jobs - washing, cooking, fetching water. The status of women during the first years of their marriage is quite low; they have to follow all instructions and orders, and are not allowed to talk back. I was a witness to all of this, and saw how a new bride learns to take care of her family.

But this beating had nothing to do with that. I try to explain to Jano that you oughtn't beat up women, especially not your own. It's good that he doesn't want to discipline his children by hitting them, but the same principle should apply to his wife. He gives every appearance of understanding and agreeing.

There's not much to do in the settlement, and many people, more men than women, hang around outside their houses waiting for something to happen to rouse them from their boredom. An argument will suffice, especially if it is between two women in the street. The loafers will gather around and watch the spectacle. The actors can certainly act, and if the crowd is big enough, the fight will be more feigned emotion than real. For the same reasons, if you drive up to a Romany settlement in a car, you will be surrounded by Roma. They don't want to hurt you - you've simply managed to rouse them from their boredom.

Children run half-naked and barefoot through the settlement. It doesn't bother either them or their parents, and after a week it doesn't bother me either. It's hot, and they're going to swim in the river.

But even when fall arrives, some kids will still be running around barefoot and half-naked. Six year-old Alena has snot running from her nose. She has a permanent nasal drip, because she is one of the kids who run around unclothed like this. I suggest she blow her nose. She does, into the front of her T-shirt. I go and get her a handkerchief, and she blows, blows and blows. That permament drip - it's easier to use your T-shirt than always be changing handkerchiefs.

Two sides of the same potato

On one of the last nights before I leave, Jano and I are sitting at his mother-in-law's house, a one-room affair. A room with one table, two beds and three kids, whom the father boots out when guests arrive. Again I'm hearing that life in the settlement is very tough, that the Roma can't survive on government handouts, and again I'm telling them to hold on, that the situation will change and there will be more jobs. I don't believe a word of what I'm saying, but they do. They can do nothing else.

Some of them go off stealing potatoes from nearby farmers' fields, in order to survive. Others go to guard the fields, for the same reason. For guarding the fields they are given money or potatoes. The guards and the thieves know each other and get along, because after all, if there weren't any thieves, there would be no need for guards.

But right now, I'm sitting in a house listening to poverty-stricken people say that one shouldn't steal, because no one likes it when someone else takes what he has invested time and money in. That you shouldn't do to another what you wouldn't like him to do to you.

Isn't that the basic condition for people to be able to live together?