Slovakia's so-called 'Roma problem' has reached boiling point in recent weeks. On August 22, three unknown assailants armed with baseball bats broke into the home of a Roma family in the northern Slovak city of Žilina and began attacking the youngest children as they lay in bed.
As the attackers screamed racial epithets, including, "We will kill you, black faces!", the children's mother, 50-year old Anastázia Balážová, tried to intervene to protect her daughters, two of whom had to be treated later for their wounds in hospital. During the assault, Balážová was struck in the head and died two days later. 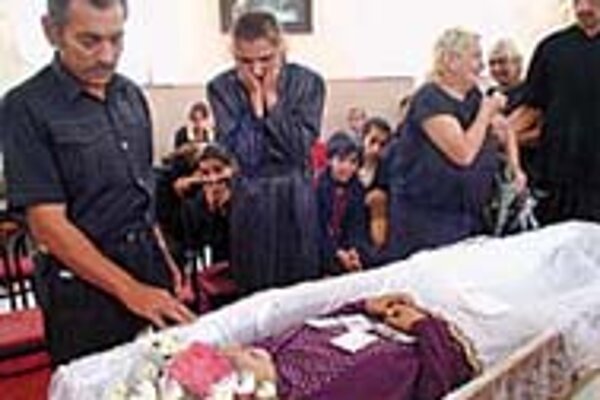 Font size:A-|A+  Comments disabled
Slovakia's so-called 'Roma problem' has reached boiling point in recent weeks. On August 22, three unknown assailants armed with baseball bats broke into the home of a Roma family in the northern Slovak city of Žilina and began attacking the youngest children as they lay in bed.

As the attackers screamed racial epithets, including, "We will kill you, black faces!", the children's mother, 50-year old Anastázia Balážová, tried to intervene to protect her daughters, two of whom had to be treated later for their wounds in hospital. During the assault, Balážová was struck in the head and died two days later.

While violent attacks on members of Slovakia's Roma population are nothing unusual, the immediate response that Balážová's death drew from government leaders was. Sweeping condemnations were issued along with promises that the police would act quickly in apprehending the culprits.

Deputy Prime Minister for Minorities Pál Csáky met with Police President Ján Pipta to request a "thorough investigation" of the attack. Pipta told Csáky that the police were considering two possible motives: that the attack was a racially motivated crime against the Baláž family, or that the offenders had mistaken the identities of their victims.

Pipta said police had launched an investigation and that they suspected "concrete individuals," but no arrests had been made by the time The Slovak Spectator went to print. Pipta and Csáky also announced plans for a seminar to be held in the autumn dealing with police behavior towards skinheads.

Vehement denouncements of the shocking beating were issued by officials from both the government and opposition, as well as international observers.

Prime Minister Mikuláš Dzurinda announced on August 25 that he would personally see to it that the investigation into the murder be resolved as soon as possible, and promised to inform citizens of all details as they emerged. In Parliament on August 24, MP's observed a moment of silence in honour of Balážová. Deputy Foreign Minister Ján Figeľ visited the bereaved family the following week.

In the US, Helsinki Commission Chairman Christopher H. Smith (a Republican from New Jersey) lashed out against the attack: "This killing stands as yet further evidence that more - much more - must be done to combat the injustices to which Roma are subjected," Smith said. "This pattern must end. Governments must face up to their responsibilities. Public leaders who remain silent in the face of blatant manifestations of racism against Roma implicitly condone bigotry."

Even nationalist Žilina Mayor Ján Slota, who once suggested the Roma be dealt with in "a small courtyard with a long whip," released a statement expressing his condolences to the Balážová family, and promising that the Žilina police would take steps to prevent a similiar event in the future.

But while the official response was quick, not all were satisfied with its sincerity, and some analysts said the reaction had been prompted by the blow the country's image took among European Union countries. Balážová's husband František said he would flee the country and seek political asylum in the west for himself and his children, something many Slovak gypsies have done over the past three years as their social conditions have deteriorated and their fears for their safety have increased.

Grigorij Mesežnikov, head of the Bratislava-based Institute for Public Affairs think tank, said that the government's prompt response had been, in effect, damage control. "This event was so brutal that the consequences could be disastrous for the image of Slovakia," he said. "The Roma issue is the biggest issue complicating Slovakia's EU ambitions, so they had to act quickly."

Mesežnikov said that the tragedy signified a genuine opportunity for the country to embrace more tolerant ways. He added that by taking such a hard line against the beating, the ruling coalition stood to gain in popularity by using the event to reject racist rhetoric recently spread by Slovak National Party deputy Viťazoslav M-ric.

M-ric, who called for the Roma to be put on reservations and called them "idiots", is facing possible criminal charges for inciting racial hatred and promoting violence against a different race or ethnic group. In an interview with the opposition-friendly Slovenská Repúblika newspaper, he said that investigators should be examining crimes caused by the Roma rather than his statements.

"Besides being an event which could help the government, from the point-of-view of the development of Slovak society, this offers a real opportunity for the nation to take a step forward," Mesežnikov said. "The gap between the Roma and Slovaks is still big. It's important for the government to lead the way, to visibly show that they do not embrace nationalism. If the government leads, the citizenry will follow."

But for the 500 mourners who attended Balážová's funeral on August 25 in Lietavská Lúcka (Žilina region), any movement towards tolerance will come too late. Balážová's husband, who had lived with his wife for 33 years, wept uncontrollably at the funeral and told reporters that he still feared for the safety of his family and himself.

Another mourner complained to journalists that nothing ever changes in Slovakia, that the police never act when violent attacks against the Roma occur. Eerily enough, another Roma family was involved in a violent altercation that same day in Lakárska Nová Ves in the Trnava region.

According to a report by the TASR news agency, a 21-year old Roma had been walking down the street when two men in a car began cursing at her for being in the way. She saw the men enter a pub, and brought her parents, brother, and fiance back to confront them.

A fight ensued during which Zdenko K. from the car suffered a fractured skull. After receiving medical treatment, he and a group of friends went to the Romany family's home armed with iron bars and attacked. One 22-year old Romany male came away with a broken jaw while his mother suffered head injuries. Both were hospitalised with injuries doctors said would take a month to heal.