Juro Farkaš was struggling to keep up with the pack of motorbikes as they rounded a dusty corner. "I don't know if it was the size of my bike, or the size of my body holding me back," said the burly environmentalist. "I thought maybe if I took the turn later I could make up some ground, but I broke too late."
As Juro skidded off the road he headed uncontrollably toward a road sign. "It was the only one on the corner but I was headed right for it," he recalled. "I had to laugh though, because it was a sign that said, 'Welcome To Our Village'. It was brand-new, with the top still wrapped in plastic. I didn't knock it down, but I gave it a good dent." 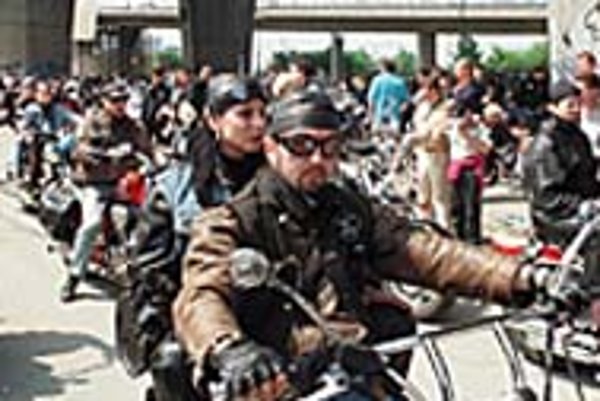 Font size:A-|A+0
Juro Farkaš was struggling to keep up with the pack of motorbikes as they rounded a dusty corner. "I don't know if it was the size of my bike, or the size of my body holding me back," said the burly environmentalist. "I thought maybe if I took the turn later I could make up some ground, but I broke too late."

As Juro skidded off the road he headed uncontrollably toward a road sign. "It was the only one on the corner but I was headed right for it," he recalled. "I had to laugh though, because it was a sign that said, 'Welcome To Our Village'. It was brand-new, with the top still wrapped in plastic. I didn't knock it down, but I gave it a good dent."

Three years ago, Farkaš joined the growing ranks of motorcycle enthusiasts in Slovakia, fulfilling a childhood fancy at the age of 35. The appeal, he says, lies both in the freedom experienced while riding a bike and in the closeness of the biker community, a community which says it is far gentler and more law-abiding than its Western equivalents.

"It may sound cliché, but I have an intense feeling of freedom when I'm on my bike," said Farkaš. "I also enjoy being a part of a group of people that is separate from the rest of society. When I go for a long ride and stop at a restaurant or pub where there is a row of bikes, I know that there will be people inside for me to join. "

While the roar of motorcycle engines may seem a relatively new aspect of Slovak culture, Štefan Karniš, the 40-year old owner of Bratislava's Harley Davidson Pub (which is also an authorised dealer of the bikes), said it is actually a reincarnation of a bygone tradition.

"Between the two world wars and for a period of time after the second, motorcycles were very popular in Slovakia," said Karniš, a large, bearded man who is himself a dedicated rider. "But when communism came, suddenly motorcycles were looked at as a type of capitalist propaganda. It was problematic to meet in groups."

Without the freedom to travel in herds - an intrinsic part of any biker culture - interest in biking fell off. It did not, however, totally die out. One group of brave bikers from Petržalka even formed Sons of Hell's Engines, or SOHE, an unofficial club in 1979. Unable to publicly display their logo and constantly having to dodge police, the group fizzled out in the mid-80's.

But in 1996, a new generation of bikers happened to see their emblem - a black skull encased in a biker's helmet with wings - and SOHE was reborn. "We got in touch with one of the founders and asked them if it was okay to use the old emblem and start up a new club," said president Roman 'Noso' Hlina. "They were very surprised to hear from us, and said sure."

These days, SOHE, one of at least three biker clubs active in Bratislava, no longer meets in clandestine locations, nor do they suffer constant identification checks by police. "We meet once a week to go riding and socialise together often," said Hlina. "The only membership requirements are that you love to ride and that you spend enough time to get close to the group."

SOHE currently has around 20 members, including Peter "Dixo" Šangor, who set the Slovak record last spring for pulling the longest "wheely" at 12 kilometers. Their faded jean-jackets and leather clothes, fondness for rock music and extreme hairstyles (either long and bushy or totally shaved) fit the stereotype biker mold. However, they insist they have no part of the Western biker reputation for violence and mischief.

"Bikers weren't seen as bad people in Slovakia until American films like "Easy Rider" and "Mad Max" started coming here," said Hlina over a glass of kofola, a Slovak soft drink. "We've stayed at hotels and have had people tell us in the morning that they were relieved that nothing was damaged while we were around."

Bratislava police concur that Slovak bikers are not out to make trouble. "As far as I can remember, we haven't had one problem this year with bikers," said Bohuš Chochl'k, of Bratislava's department of traffic control. "There hasn't even been one citizen complaint."

Karniš also laughed at the image of Slovak bikers as criminals. "I would like to let everyone know that even though we may look scary, it's absolutely safe to come to my pub and hang out with us bikers," he said, grinning. "I promise we don't want to rob you."

Aside from Harley Davidson, two other foreign dealers - Honda and Yamaha - opened shop in the mid-90's in Slovakia, entering a market long dominated by the Czech motorcycle firm Jawa. All three firms report modest yet steadily rising sales. "The main problem in Slovakia is not interest, but money," said Karniš, whose firm still sells less than 10 bikes a year starting at 400,000 ($8,500) Slovak crowns. By contrast, a new Jawa costs just 70,000 crowns, and second-hand Jawa's can be purchased for as low as 10,000 crowns.

With foreign bikes out of the question for most enthusiasts, Slovak bikers spend hours modifying and maintaining old Jawas - a labour of love. "Many of these guys have been riding the same bike for over 10 or 20 years. There's a passion for riding in them," said Peter "Candy" Dobrovodský, a member of SOHE who says he has been riding motorcycles since the age of 8. "Aside from financial concerns, bikers in Slovakia are of the same breed as bikers everywhere - biking is an international fraternity."

Though not an official member, Farkaš was riding with the SOHE motorcycle club on the day of his accident. He said he experienced first-hand the close fraternity Candy spoke of, adding that he had been very impressed by the quality of the people in Slovak biking circles.

"According to the amount of time I had spent with the guys from SOHE, we should have been strangers," continued Farkaš. "But they arranged for a car to come get me and take me to the hospital, and two guys who literally were strangers stayed with me at the hospital the entire day."