Since the 1989 revolution, Slovaks have made a name for themselves as shopping tourists, flocking to neighbouring Austria, Hungary, Czech Republic and Poland to take advantage of the cheap prices and wide selection of goods available at shopping malls in those countries.
But after the British chain Tesco opened a string of hypermarkets here in the late 1990's, followed by the French Carrefour, Slovaks began to stay home in droves, and with other hypermarket chains including the German Metro on the verge of opening hypermarkets in Bratislava, the trend is sure to continue. Experts say that in two years' time, there will be more hypermarkets in the Slovak capital than in Vienna. 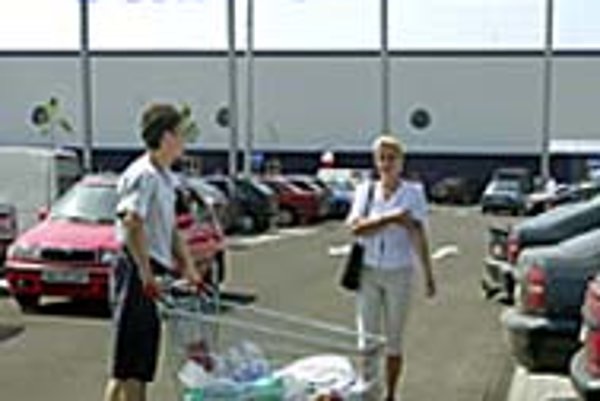 Font size:A-|A+  Comments disabled
Since the 1989 revolution, Slovaks have made a name for themselves as shopping tourists, flocking to neighbouring Austria, Hungary, Czech Republic and Poland to take advantage of the cheap prices and wide selection of goods available at shopping malls in those countries.

But after the British chain Tesco opened a string of hypermarkets here in the late 1990's, followed by the French Carrefour, Slovaks began to stay home in droves, and with other hypermarket chains including the German Metro on the verge of opening hypermarkets in Bratislava, the trend is sure to continue. Experts say that in two years' time, there will be more hypermarkets in the Slovak capital than in Vienna.

Concerned with the pace of the change sweeping the Slovak retail sector, the Economy Ministry has been trying to frame a law on business chains this year that would protect consumers from what it calls "predatory behaviour" by these powerful foreign retailers.

At issue as well has been market concentration and the protection of domestic suppliers and smaller retailers. Noting the experience of Great Britain, France, Austria and other European countries, where five big chains control more than 60% of the retail market, the ministry wanted to provide some degree of legislative protection for smaller retail outlets in competition with out-of-town megastores, as well as to force big retailers to carry products made by a variety of suppliers.

What they have come up with - a draft law to be submitted to parliament sometime this fall - is a compromise bill that protects the interests of consumers as much as it reflects the importance the government attaches to foreign investment.

To protect suppliers and consumers, the Economy Ministry proposed that retail chains purchase the same commodity - for example, cola or peanut butter - from at least three different manufacturers. In this way, the ministry hoped to open doors to more suppliers, and also to ensure choice for the consumer. "We believe that retails chains with significant market influence must allow minimum access to the market to a certain number of suppliers," said Branislav 'urajka, deputy director at the section for business support strategy and legislation of the Economy Ministry.

The other part of the law was meant to have ensured a wide distribution of large retailers across Slovakia by restricting the number of hypermarkets which could set up shop in any one district. This measure was voted down by a group of cabinet ministers whose work affects the economy.

According to Adrián 'urček, the head of the biggest domestic supermarket chain Jednota, the ministry's proposal doesn't help the market because it provides protection in the wrong places. "It's true that the penetration of hypermarkets in Slovakia will cause big problems for domestic suppliers. But on the other hand, it will be good for us because domestic production is falling behind and needs some pressure to be able to revive," he said. "This pressure will certainly come from the hypermarkets, which at the end of the day might be good for the Slovak production sector. So there is no need to protect suppliers."

But 'urajka disagreed. "Hypermarket chains know that suppliers have to go through them because they have a significant share on the retail market, and that's why they tend to set some unfavourable business conditions from the suppliers' point of view," he said. "We just want to avoid what happened in several western countries, where four or five chains control 80% of the market and set the rules of the game." He said that the supplier restrictions would only apply to retailers who had an annual turnover of more than 1.5 billion Slovak crowns ($32 million), as well as a 15% share on the national retail market with a particular commodity (meaning that retailers would only have to carry three kinds of peanut butter if they sold more than 15% of the peanut butter consumed in Slovakia).

'urajka added that retailers should be happy the ministry had not caved in to the demands of some domestic retailers that the law guarantee hypermarkets carry a certain quota of Slovak products. "We are aware that OECD and EU rules do not allow us to specify how many of those three suppliers have to be Slovak companies, as was proposed by the Slovak Grocery and Agricultural Union, which insisted that two out of the three suppliers have to be Slovak companies," he said.

For 'určák, the biggest shortcoming of the bill is that it fails to protect regional economies by limiting the amount of retail space that can be built in one region. Without this regulation, he says, there will be a strong concentration of hypermarkets in and around Bratislava, which will attract both the production and buying power of surrounding regions. "This strong concentration is what I am fighting against. I think that if the market is saturated, then it is necessary to tell investors to move on," 'určák said.

He added that pushing hypermarkets to open in smaller urban centres might even have been to their benefit. "Every weekend, people from [northern Slovakia's] Kysuce go shopping to Poland and the Czech Republic. Wouldn't it be worth it for hypermarkets to open one store in that region and turn all those people into their customers?" he asked.

But while the original draft bill proposed by the Economy Ministry did contain such a restriction, it was shot down by Finance Minister Brigita Schmögnerová and Deputy Prime Minister for Economy Ivan Mikloš. Both said that if the access of retailers to particular markets was limited, competition itself would be hurt, which at the end of the day would have a negative impact on the customer.

"Despite the fact that we originally proposed this restriction, we understand the point of the other ministers," 'urajka said. "If we want to increase direct foreign investment, we cannot be telling investors where to go."

Analysts agreed that this was sound reasoning. Michal Kustra, an analyst with Tatra Banka, said that any regulation of business activities deformed the business environment. "It seems to me a piece of stupidity to push hypermarkets towards the countryside where they wouldn't have as great a turnover as in large cities," Kustra said.

Statistics show that 50% of Slovak retail turnover occurs in Bratislava.