President Rudolf Schuster was flown in critical condition on June 28 to a hospital in Innsbruck, Austria, as doctors began to admit that Slovakia's head of state was actually dying.
Schuster, who had been hospitalised on June 14 with stomach problems, suffered a dramatic decline last week that forced doctors to operate on him to heal a perforated large intestine. But after infection spread to his lungs, the president was given a tracheotomy, put on artificial respiration, kept in a drug induced coma and flown to Austria for an emergency blood transfusion.
"The president's illness is associated with high mortality, which means he can die," said František Antoš, one of the Czech doctors invited to help rescue the Slovak head of state. 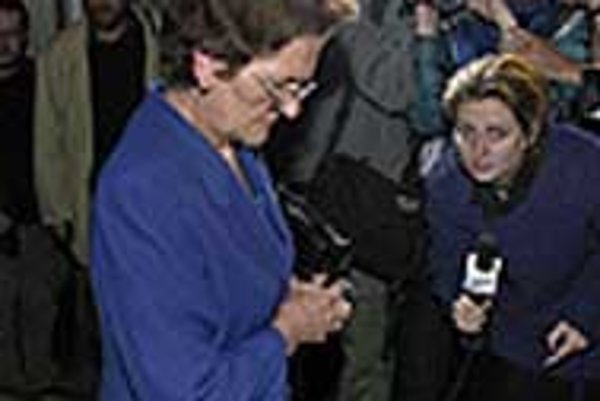 Font size:A-|A+  Comments disabled
President Rudolf Schuster was flown in critical condition on June 28 to a hospital in Innsbruck, Austria, as doctors began to admit that Slovakia's head of state was actually dying.

Schuster, who had been hospitalised on June 14 with stomach problems, suffered a dramatic decline last week that forced doctors to operate on him to heal a perforated large intestine. But after infection spread to his lungs, the president was given a tracheotomy, put on artificial respiration, kept in a drug induced coma and flown to Austria for an emergency blood transfusion.

"The president's illness is associated with high mortality, which means he can die," said František Antoš, one of the Czech doctors invited to help rescue the Slovak head of state.

While other doctors attending Schuster said the situation wasn't hopeless, Slovakia's political establishment was convulsed with speculation as to the possible impact of his lengthy illness or even death. Some analysts speculated that the president's condition might open the door to a return of former Prime Minister Vladimír Mečiar to high politics, while others said the president's powers could be safely devolved to executive officials to keep the country from constitutional crisis.

Perceived errors in the Slovak medical establishment's handling of Schuster's illness also ignited a storm of criticism of the country's health system and Health Minister Tibor Šagát. While politicians called on Šagát to resign, people on the streets said the care Schuster received was part and parcel of a national health care apparatus unable to ensure decent treatment of ordinary citizens.

While the country waited for news of the president's condition after his airlift to Austria, attention focused on the quality of the care he had received during his initial stay at a small hospital run by the Interior Ministry.

At his initial induction in mid-June, Interior Ministry hospital doctors suspected that Schuster's abdominal discomfort was caused by something he had eaten. It was not until the president's temperature soared on June 18 that physicians discovered he had a perforated large intestine, a disease requiring immediate and delicate surgery since the bacterial contents of the intestine could cause major internal complications if they escaped.

Emergency surgery was performed early in the morning of June 19, but following a brief improvement Schuster relapsed quickly with a lung infection caused by the contaminating bacteria. The president's lungs were unable to breathe properly, forcing doctors to do an emergency tracheotomy on June 25 and put the patient on a respirator.

Following the second operation to open his wind passage, a team of Czech doctors who had treated Czech President Václav Havel for the same condition in 1998 were flown to Bratislava at the request of Schuster's family. Their arrival coincided with bitter criticism of the care Schuster had received until then.

In the original Interior Ministry hospital, it was discovered, Schuster had been assigned a room without air conditioning even though peak temperatures in Bratislava that week reached 35 degrees centigrade. The hospital was so poorly equipped with tomographic machines (used for obtaining cross-section pictures of the abdomen by ultrasound) that Schuster had to be moved to the National Oncology Hospital and then to Bratislava's Kramáre hospital - where, in critical condition, he had to wait several minutes before his family members were able to rouse hospital personnel by banging on the windows.

After spending several days in Kramáre - a hospital whose air filtration facilities Health Minister Šagát had criticised on March 23 as "one of the worst in Slovakia" - Schuster's infected lungs were unable to deliver the necessary oxygen to his blood, forcing his evacuation to Austria to be put on a blood transfusion machine that would make sure oxygenated blood reached critical areas of his body.

"The contents of the president's intestine have spread to his abdominal cavity, where there are no borders," said Austrian medical expert Walter Hasibeder, who arrived in Slovakia on June 28 to join the Slovak and Czech medical team and oversee Schuster's transport. "Due to the bacteria present in the intestinal material, the president's lungs have become infected and have stopped working," he said.

Ordinary Slovaks appeared disgusted but unsurprised at the treatment Schuster had received. "The government is to blame for not maintaining the basic health care functions of this country," said one woman at a Bratislava bus stop who asked not to be named.

"If the government can't even help the president, then it's no wonder that other people receive even worse treatment," said Terézia Feješová, 65, a retired nurse. "I've been to that Interior Ministry hospital, and they couldn't even do a urine test on the weekend because they're trying to save money."

Politicians from both sides of parliament also meted out harsh words, with Deputy Prime Minister for European Integration Pavol Hamžík calling on June 28 for the embattled Šagát to resign. The Health Minister refused, saying he had done nothing wrong. "The steps I took were excellent," he said.

However, under public pressure Prime Minister Mikuláš Dzurinda created a special committee to investigate the possible mistakes made during the president's hospitalisation. The committee is chaired by Interior Minister Ladislav Pittner and Šagat, who refused to divulge the names of other committee members or when a verdict might be reached.

Although Slovakia has been without a president before, from March 1998 to June 1999 when Schuster took office, legal experts were stumped as to how Schuster's illness or possible death might affect the executive branch.

Article 105 of the Slovak constitution reads simply that "in the event that the president has been unable to perform the duties of his office for more than six months, parliament shall recall him and a new president shall be elected for a regular term." However, the document says nothing about when the six months term of incapacitation should start, or what unperformed duties constitute this 'inability' to hold office.

Some of the most important of the president's tasks - to sign laws into effect, to dissolve parliament and appoint a new government - may devolve to the speaker of parliament according to a 1999 constitutional amendment, while others go to the prime minister. But again, little certainty exists as to how these responsibilities might be transfered if the president remains critically ill. At press time, Dzurinda and parliamentary speaker Jozef Migaš were scheduled to meet June 30 to discuss the possible distribution of presidential powers.

And while many political professionals refused to comment when asked about the implications of the president's possible death, saying the media's conduct recently had been ghoulish, others said that new presidential elections, as mandated by the constitution, might allow Mečiar to make a second bid for the presidency after his loss to Schuster in the final round of voting in 1999.

Grigorij Mesežnikov, president of the Institute for Public Affairs thinktank, said that with Mečiar's public approval rating the highest of any public figure (see news briefs, page 2), the three-time former prime minister would have a significant chance of victory in any potential direct presidential elections. But he added the belief that the government could field a popular candidate if needed. "Maybe Foreign Minister Eduard Kukan would be a good choice. But it's just my personal opinion," he said.

Jozef Božik, Mečiar's opposition HZDS party's vice-chairman for media, wasn't able to say whether Mečiar would run for the presidency if new elections were necessary. "It's too early to talk about this. President Schuster is alive and we all hope he'll survive," Božik said.