Nowhere is the gulf between amateur hackers and trained runners so wide as in the marathon event. Millions of hopeful competitors worldwide line up on marathon start lines every year to test their mettle over 42.2 kilometers, but only a fraction of them have or will ever run a single mile in five minutes.
So when runners like Slovakia's Róbert Štefko turn in marathon times equivalent to 26 miles in a row at about 5:06 per mile - as he did on March 5, 2000 in qualifying for the Sydney Olympic Games marathon this fall - their claim to 'elite' status is beyond dispute. 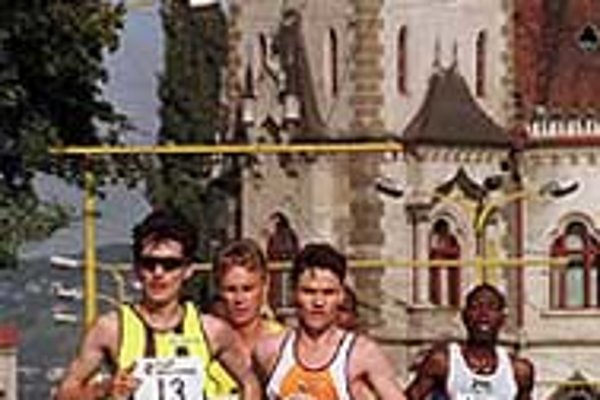 Font size:A-|A+  Comments disabled
Nowhere is the gulf between amateur hackers and trained runners so wide as in the marathon event. Millions of hopeful competitors worldwide line up on marathon start lines every year to test their mettle over 42.2 kilometers, but only a fraction of them have or will ever run a single mile in five minutes.

So when runners like Slovakia's Róbert Štefko turn in marathon times equivalent to 26 miles in a row at about 5:06 per mile - as he did on March 5, 2000 in qualifying for the Sydney Olympic Games marathon this fall - their claim to 'elite' status is beyond dispute.

Štefko, who became the first Slovak athlete to qualify for the Olympics with his 2:13:57 in the Lake Biwa Marathon in Japan, is given only an outside chance of taking home a medal from Sydney. But since his March qualifying run he's been getting faster, and feels that a summer of high-altitude training will leave him in shape to run with the leaders in Sydney.

"I think I'm capable of turning in a good result, but the whole thing with marathon running is that you've got to have the goods, to feel good on the morning you run," Štefko said from his training site in Štrbské Pleso in the High Tatras. "With 10K [kilometre] running, when [Ethiopian middle distance star Haile] Gebrselassie lines up you can say 95% he's going to win, but with marathons even the runaway favorites aren't sure to win. It simply depends on who feels good on the day, and it's one of the only sports like that, which is why it's so interesting."

Štefko himself has been feeling good in races lately - so good, in fact, that he set a Slovak half marathon record in Malmo, Sweden on June 14 with a time of 1:00:24, one of the top ten half marathon times run around the world this year.

"The warm weather from March onwards helped my training a lot, making it more focused," he said. "All the training I had done was reflected in this race, but it was also a question of hitting my form on the day - the weather was beautiful, about 18 Celsius and that fresh northern air, and the wind was behind us for most of the way. Mind you, I couldn't have run any faster than this, it really took it out of me, but I was really happy with the result [fourth place] because I beat many good runners."

Earlier this spring, Štefko had set a Slovak record over 25 kilometres in Berlin, when he beat seven world-class African runners to win in 1:15:31, and won a tough, hilly 15K race in Nasavrky, Czech Republic - a result which, achieved less than a month after his Olympic qualifying effort, told him his fitness was solid.

And yet, for all the quality times Štefko has run this year, he still gets no respect - even at home. "Štefko doesn't rank among the best world marathoners, so we give him only an outside chance of picking up a medal," said Anton Zerer, spokesman for the Slovak Olympic Association. "On the other hand, he has had very good half marathon results, and the marathon is always very much a lottery."

According to Runner's World magazine, Štefko ranked 86th among world road runners in 1998, but is currently in 99th place after running only one marathon in 1999 and one this year, having focused in this intervalon cross country.

The main problem, however, is not so much that Štefko is getting slower, but that other runners are getting faster. After Ethiopian Belayneh Densimo set the world marathon record at 2:06:50 in 1988, the mark remained unbeaten for 10 years. Since September 1998, however, eight men have bettered Densimo's time, including current record holder Khalid Khannouchi of Morocco (2:05:42). What's more, of the top 50 marathon times ever run, fully 24 of them have been achieved in the past two years.

Štefko's coach, Dušan Valent, explained that the marathon event had become much more popular in the last several years, drawing both elite runners and prize money from less fashionable 10K and half marathon races.

"There used to be only four real marquee marathons," he explained, "Berlin, Amsterdam, New York and London. Now there are maybe 20 or 30 every year, and middle distance runners with great results are naturally drawn to them for financial reasons."

While Štefko could not be considered among the hot favorites for a medal or even a top 10 spot in Sydney, Valent said, he could be expected to finish in the top 20. "Remember, in Sydney you will have maybe 30 runners, each of whom have come to win," he said.

Slovakia, according to both Valent and Štefko, is not the easiest country for a top marathoner to practice his sport. While Štefko is ideally physically suited to the event, at a slight 179 cm and 61 kilos (5'10", 133 pounds), and holds Slovak records for the mile (3:58:20), the 10K (27:51:58) as well as the half and full marathons, he does not have the medals and flashy international results needed to win significant sponsorship.

"Running in Slovakia is less popular than collective sports," Štefko said. "People also want big results, and when they aren't there the sport doesn't prosper. We haven't had really big results in track and field, and when you try and tell people someone finished 12th in the world champs, they say‚ 'what's that, 12th?'."

Štefko has an equipment sponsorship from Asics, now in its third and final year, and earns money as a lieutenant in the Slovak army (his official title is Sport Instructor, and his employer is the Dukla Banská Bystrica athletic club, an organisation under the Defence Ministry).

But even without rich sponsorship contracts or great national fame, Štefko has managed to set running records his coach says will take generations to break in Slovakia. "I'll tell you this," said Valent gruffly, "just look at that Malmo half marathon - Robo was maybe happier with that than with any other result he has accomplished, just because he managed to take 1:22 off his personal best. This is a guy who doesn't let success go to his head. I can tell you there won't be another runner like him born in this country for at least 50 years."