"Your [Slovak] women are excellent. If our men had such women at home they would be very happy."
These words, spoken by a foreign delegate during recent OECD admission talks in Paris, have been echoed by hundreds of male visitors to Slovakia over the years. What was unusual about this particular sentiment, however, was that it was inspired by a woman who has played a key role in shaping the Slovak economy for the last seven years - the vice-governor of the National Bank of Slovakia (NBS), Elena Kohútiková.
Listening to Kohútiková speak for just a few minutes makes it clear she doesn't fit the stereotype of a boring central banker wrapped up in the minutiae of monetary policy. The 47 year-old mother of two moves around her cramped Bratislava office as she talks, gesturing expansively and peppering her observations with laughs and slang expressions. 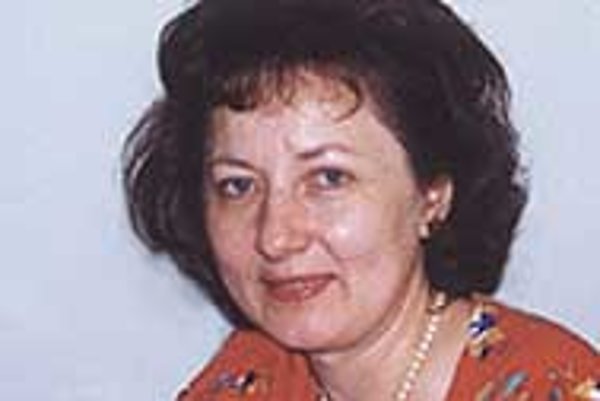 Font size:A-|A+  Comments disabled
"Your [Slovak] women are excellent. If our men had such women at home they would be very happy."

These words, spoken by a foreign delegate during recent OECD admission talks in Paris, have been echoed by hundreds of male visitors to Slovakia over the years. What was unusual about this particular sentiment, however, was that it was inspired by a woman who has played a key role in shaping the Slovak economy for the last seven years - the vice-governor of the National Bank of Slovakia (NBS), Elena Kohútiková.

Listening to Kohútiková speak for just a few minutes makes it clear she doesn't fit the stereotype of a boring central banker wrapped up in the minutiae of monetary policy. The 47 year-old mother of two moves around her cramped Bratislava office as she talks, gesturing expansively and peppering her observations with laughs and slang expressions. She exudes both charm and humour, qualities which she says help her not to be overwhelmed by the difficult position she holds.

But while meeting friends and colleagues and singing folk songs rank among the recently appointed vice-governor's favourite pastimes, Kohútiková has also, during her 10 years at the central bank, developed a passion for what she does - to coordinate the work of 400 central bank employees and to develop a vision of the banking sector's development and the role of the central bank.

Kohútiková's career with the NBS began in 1990 when the bank was still the State Bank of Czechoslovakia. A humble clerk at that time, she had no ambitions to start a professional career in the bank. However, one year later she was offered a promotion and moved on to become the head of the division for banking transactions.

"When I was offered this job, I told myself 'When they decide to pick a woman as head of a division in an institution where most of the employees are men, I'll take it'," Kohútiková said. "Whenever you have a man and a woman with the same qualities, society always picks the man," she adds.

Despite the fact that women are moving into key managerial positions in increasing numbers in Slovakia these days, Slovak society, according to Kohútiková, still doesn't fully accept what is essentially a new role for women. "To have a housekeeper and a tutor for your children is something that this society hasn't yet fully accepted," Kohútiková says.

Her role as a mother has created some interesting conflicts with her work, but none which she has been unable to solve. With her children now grown up and her second husband serving as Slovakia's ambassador to the UN in Vienna, Kohútiková uses the time which other women devote to their families to study and prepare for important business meetings. She says she doesn't regret the commitment her job demands. "I have been working hard to improve professionally, and was able to achieve something," Kohútiková says.

In March 2000 she was elected vice-governor with responsibilities for monetary policy, research, forex trading and information.

Kohútiková views her current eminence in the bank as a result of her hard work. Her daily schedule usually starts just after 7 a.m. and ends late in the evening. She looks back with a slightly wistful air and explains that now she is a high-flier in the central bank, she can rarely find the time to read novels or be with her family. "I have to have to keep an eye on everything at work to manage my time efficiently."

However, Kohútiková thrives on the challenge. The nature of her work, she says, is turbulent and rarely without problems. "But solving these problems is what gives this job its spice," she says.

Walking around her office on June 1 with the daily report she gets on the Slovak crown, she notes that the currency has depreciated 0.22% just that day. On more than a few occasions, she explains, the figure in the report was so dangerously high that she had to act immediately to put a stop to the sudden currency slide, without time to consider the potential consequences of a bad decision.

However, even dramatic currency depreciations such as the one that occured this past May pale into insignificance for Kohútiková when compared to some of the economic crises the bank has had to deal with during her ten-year term.

She recalls one of the toughest periods, immediately after the parliamentary elections in 1998, when the exchange rate peg which tied the value of the Slovak crown to either the DEM or the USD was discontinued. The NBS made the move at a time when speculation over devaluation had grown, fuelled by the Russian financial crisis in August and September 1998, and about $1 billion was spent supporting the Slovak currency before the effort was called off. Days after the decision, the crown depreciated by 17%. However, NBS predictions of a gradual currency stabilisation materialised and the exchange rate levelled off.

Maintenance of a stable currency, according to Kohútiková, has been and always will be the most important task for the central bank. She believes that the current government's economic reforms have helped the currency considerably: "Despite the fact that the recovery steps implemented by the government have had a negative influence on many ordinary people, I support them because they have helped stabilise the currency."

More stabilisation in the banking and corporate sector is expected after bank restructuring and privatisation, something Kohútiková strongly supports. "Imagine you had cancer and opted for an operation," she says. "This is exactly what happened here. The government decided on the operation rather than taking medicine, which sometimes doesn't solve anything with cancer because an end comes at the least expected moment. Now, after the operation we have to continue with the treatment, which will be the privatisation process."

Only when banks are privatised and the economic sector is healthier will the role of the NBS change from caretaker to spectator. "This will be a very important move for us."

The future of Slovak banking, according to Kohútiková, lies in bank mergers. "Only when all banks are healthy will we see how many of them can survive, because there can only be as many banks as a country's economy can feed," Kohútiková says. "Globalisation is the future of this industry."

However, before this happens, the central bank has its work cut out. The most significant indicator of the success of the NBS's policies is the current relative stability of the Slovak exchange rate, despite its depreciation against the euro following a strengthening of the US currency, and a significant drop in domestic interest rates.

While in October 1998 the average interest rate on drawn loans was 23.5%, by March 2000 it had fallen to 14.2%. The drop is expected to help corporate sector restructuring, significantly reducing financial costs borne by businesses.

As Slovakia looks for full membership in western organisations, NBS representatives together with their colleagues from the government have to build support for Slovakia's membership within the OECD and the EU.

The many integration negotiations that Kohútiková has taken part in have helped her to temper her initial reactions when dealing with counterparts. "I used to be explosive by nature but during the last few years I have become calm - and these discussions especially taught me to be calm," Kohútiková said.

Government officials who have spent any time with her are quick to praise her qualities in discussion. She is strongly argumentative and persuasive, which they say are the two characteristics which have won her respect and authority abroad in past years.

"To do what she does a person has to have a strong personality, which she undoubtedly has," said Ján Jursa, a plenipotentiary for Slovakia's membership in the OECD who has worked with Kohútiková at several meetings with OECD representatives. Combativeness and dynamism are two other characteristics which, according to Jursa, stand out in Kohútiková.

"Hard working, talented and wise" were three words that occurred to Finance Minister Brigita Schmögnerová when she was asked to describe the NBS vice-governor. "I have known her for a long time and I think that she has preserved a stable position in the NBS exactly because of these three features of her personality," Schmögnerová said.

Analysts close to the banking sector also characterised Kohútiková as a person ideally suited to her profession. "The practical development of monetary policy proves that she is an expert on what she does," said Martin Barto, the head of strategy at the state-owned bank SLSP.

Given all the praise she has garnered over her long years in the industry, she is well aware that she could command a higher price elsewhere. She has been offered several posts in government as well as at one foreign financial institution. But, she says, her passion for what she does has led her, so far, to refuse.

"There might come a time in the future when I say that I want to risk it and accept a job offer in some foreign institution. But so far I haven't felt any urge to own a yacht," she said with a laugh.