With his boyish good looks and engaging grin, 27 year-old Braňo Ondruš looks like the answer to a dying political party's prayers. Having decided to run for the vice-chairmanship of his ruling coalition Democratic Left Party (SDĽ) at its July 8 national congress, Ondruš leads a new generation of young SDĽ politicians seeking to redefine the socialist party's platform and boost its voter support. And yet, despite having studied political science at Bratislava's prestigious Comenius University and having spent time at NATO headquarters in Brussels, Ondruš supports a hardline wing of the SDĽ under party chairman Jozef Migaš that has recently been associated with clientelism and accused of destabilising the Slovak government - behaviour Ondruš himself says he abhors. 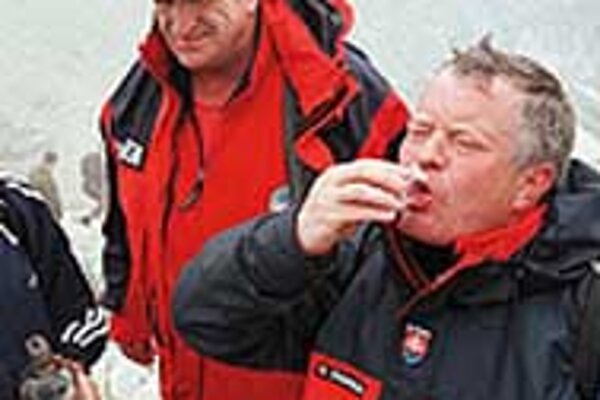 Font size:A-|A+  Comments disabled
With his boyish good looks and engaging grin, 27 year-old Braňo Ondruš looks like the answer to a dying political party's prayers. Having decided to run for the vice-chairmanship of his ruling coalition Democratic Left Party (SDĽ) at its July 8 national congress, Ondruš leads a new generation of young SDĽ politicians seeking to redefine the socialist party's platform and boost its voter support. And yet, despite having studied political science at Bratislava's prestigious Comenius University and having spent time at NATO headquarters in Brussels, Ondruš supports a hardline wing of the SDĽ under party chairman Jozef Migaš that has recently been associated with clientelism and accused of destabilising the Slovak government - behaviour Ondruš himself says he abhors.

The confusion over where Ondruš and his younger SDĽ peers might steer the party if they won leadership posts at the July congress merely reflects the identity crisis that is crippling the SDĽ as a whole. With voter support at around 6%, down from over 14% in September 1998 parliamentary elections, the SDĽ has suffered more in the polls than any other government party from the hard-hitting economic reforms approved in 1999.

The damage, in turn, has increasingly divided the party between its hardliners, who demand that privatisation be slowed and price hikes softened, and a reformist faction led by Finance Minister Brigita Schmögnerová and Education Minister Milan Ftačnik, who feel that the painful reform process must continue apace, albeit with all possible concessions to the sufferings of the average citizen. Ftačnik declared on May 18 he would run against Migaš for the SDĽ chairmanship in July, a contest that is likely to be decisive for the party's political future.

The July SDĽ congress will also hold the key to restoring government stability after a rocky spring. Three SDĽ MPs tabled a bill on May 26 that would ban politicians from holding membership in more than one party - an apparently innocent law that would, if passed, result in the elimination in the strongest government party, the Slovak Democratic Coalition (SDK), many of whose members have ties to other parties. On top of Migaš' support of an opposition motion of non confidence in Prime Minister Mikuláš Dzurinda in April, the SDĽ's latest move has fuelled fears that the government may lose the cohesion it needs to push reform forward.

The SDĽ's new generation is not short of ideas on how to correct the party's slump in the polls. "The role of the SDĽ should be to support quick reforms, but to spread the difficulties that these reforms bring more equally among people," said Ondruš, sitting in short sleeves on the terrace of Umelka pub in Bratislava on May 30.

"The problem of this government and the SDĽ is not that ordinary people don't understand the need for reform, but that people don't know how long they will have to tighten their belts. They also read about businessmen who still have tax and privatisation debts, but who go on safari for holiday because they need to relax. That makes people who are suffering angry."

The unusual combination of political ideas in Ondruš' programme - aggressive reforms tempered by social justice - is a concession to 'New Left' thinking that if socialist parties slow reform to ease the impact of price hikes on the common man's pocketbook, they may actually end up causing their voters more pain in the long run by delaying the return of economic health.

In other ways as well, new and old socialist positions seem to have become intertwined in the young would-be vice-chairman's thoughts. His father having been a member of the Communist Party, Ondruš himself joined the party in 1990 at age 16, and says there is "nothing much" that separates his philosophy from his father's. But while he advocates, for instance, that all funding for political parties should come from the state - a typical leftist panacea - he proposes at the same time that parties would disclose how they use the funds on the Internet, a tool that in Slovakia is used mostly by the wealthy, the educated and the young.

Indeed, the Internet is fast becoming the tool of choice for the country's 'new generation' of socialists, many of whom hail from the Young Democratic Left group. "We now have an e-group of about 100 people under 30 participating in an e-mail chat line run by the SDĽ," said Ondruš. "The SDĽ has 22,000 members, but these are mostly retired people. The Young Democratic Left has about 2,000 members, most of them high school students. The fact that such an e-group has arisen is a good signal that we are attracting young people with their own minds who don't take party leaders as little gods."

And yet, the bitter divisions between the SDĽ's 'little gods' are being played out among the party's younger generation as well. Of the four most prominent twenty-something faces within the SDĽ - Ondruš, SDĽ vice-chairman Ľubomír Andrassy, MP Milan Ištván and Young Democratic Left head Ľubica Takáčová - Andrassy has emerged as a firm supporter of the radical Migaš, followed cautiously by Ondruš himself.

"Some of us may vote for Migaš and other for Weiss, but that's because of the reality of the division in the party leadership," said Ondruš. "I will support simply anyone who is prepared to open the door to people from the younger generation. So far I have the feeling that Migaš is more prepared to let these young people in than Ftačnik or [Parliamentary Foreign Affairs Committee Chairman] Weiss. But for me it will be important to let young people get ahead without forcing them to support everything, and if Migaš says "you don't have to agree with me, but I want to bring in younger people," then I will support him."

For the avowedly reformist Ftačnik, it was curious to see progressive young socialists lining up with the Migaš camp, one more known for its links to the former communist establishment than for its forward-looking policy. "This is somehow resembling the past," said Ftačnik during a break in a European Sports Ministers Conference in the capital on May 30. "They [young SDĽ members] are blaming Mr. Weiss for not being as open as Mr. Migaš. But if you look at what the young SDĽ politicians are presenting, this is more compatible with the vision of SDĽ policy that we [the Ftačnik group] have. I haven't seen any discussion on the Migaš side of that."

For Ftačnik, the future of the party lies with abandoning socialist radicalism and working with coalition partners to make economic change liveable. "Migaš and his people think that the most effective policy of the SDĽ would be to criticise the policy of its coalition partners," the Education Minister said.

"For the radicals, to insist and bang on the table is a solution, rather than presenting solutions and proposals to coalition partners. For them, being radical means talking about the social situation and urging others to do something. I'm not against reasonable criticism, but I think we should base the success of the SDĽ on that of the whole coalition, making sure that everyone knows what the contribution of the SDĽ was. We also want to bring honour and morality back to our policy. But if I want to criticise someone else, I must be sure that the party is clean in these respects."

The references Ftačnik made to 'honour' and 'morality' are on the lips of many SDĽ politicians these days as the party emerges from a series of messy scandals in which the Migaš group was accused of clientelist links to the nuclear and energy sector lobby. Party vice-chairman Weiss said on May 25 that the SDĽ was suffering its "worst crisis of style and image" since its foundation a decade ago.

But far from retreating from its salient against the coalition, the Migaš group has intensified the pressure since April by insisting on a cabinet shuffle, and then by introducing a bill to parliament that would force SDK deputies to abandon their complicated system of membership in the various parties that founded the SDK - thus spelling the end of the government's largest member and violating the coalition agreement signed by all government parties in October 1998.

"The main problem of the Migaš group is that it doesn't have access to executive power," explained political scientist Ľuboš Kubín of the Slovak Academy of Sciences. Migaš, as Parliamentary Speaker, has little voice in the cabinet, unlike reformist SDĽ ministers Ftačnik, Schmögnerová and Pavol Kanis (Defence); by insisting on a cabinet shuffle and shaking the ground under the SDK, Kubín said, Migaš hoped to alter power relations within the coalition and give his group "a greater say in deciding key issues like the upcoming privatisation of [gas utility] SPP and [electricity utility] SE, which so far have not been unfolding according to the group's liking."

In recruiting power for this offensive against the cabinet, Kubin continued, Migaš was looking under every stone - including young party members who might be persuaded to trade support for greater influence in the party. "Migaš is playing the generation card, promising positions to younger SDĽ politicians to isolate the middle generation [such as Ftačnik]." While few predictions could be made at present, he added, if the Migaš group won the July congress - which looked likely - "basic changes in coalition relations could come soon."