It's midday on a school morning, but only one of the six massive doors at Comenius Unversity's Law Faculty is unlocked. Students queue patiently and squeeze through the narrow aperture; for them, it's not unusual to find their entrance to the building restricted even by chains.
But across town, Slovakia's Education Ministry is getting ready to throw open many more doors to the country's university students. Cloaked in scaffolding and undergoing a much-needed facelift, the ministry in early May tabled a 35-page proposal that would make the Slovak higher education system compatible with those of western countries - including three-year bachelor degrees, credit-based programmes and fee-paying students. 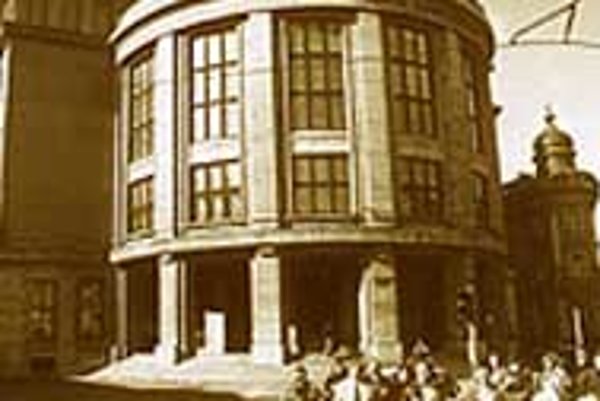 Font size:A-|A+  Comments disabled
It's midday on a school morning, but only one of the six massive doors at Comenius Unversity's Law Faculty is unlocked. Students queue patiently and squeeze through the narrow aperture; for them, it's not unusual to find their entrance to the building restricted even by chains.

But across town, Slovakia's Education Ministry is getting ready to throw open many more doors to the country's university students. Cloaked in scaffolding and undergoing a much-needed facelift, the ministry in early May tabled a 35-page proposal that would make the Slovak higher education system compatible with those of western countries - including three-year bachelor degrees, credit-based programmes and fee-paying students.

"Our vision for the 21st century is to increase the number of students [at universities], but not decrease the level of quality," said Education Minister Milan Ftáčnik in an interview with The Slovak Spectator on May 23. "The developed countries of Europe solved this task over several decades, from the 1960's to the 1990's, but we don't have that much time. We have to do everything in one reform process."

Statistics on Slovak universities brought forward in the ministry's report, entitled "A Proposed Concept for the Future Development of Universities in Slovakia," give substance to Ftáčnik's claim that time is short. Slovakia had 1.9 university students per 100 inhabitants in 1996, compared to 3.6 in neighbouring Austria and 4.4 in Finland; less than 10% of Slovaks have a university degree, meanwhile, about half the European norm. To make matters worse, spending on education in 2000 dropped to its lowest level since 1989 - 0.6% of GDP - placing Slovakia 22nd among European nations, alongside Romania and Bulgaria.

To bring more students into the system and raise the general level of education in society, Ftáčnik proposes a three-pillar solution for universities including diversification, reform of financing and international compatability.

In the first stage, he said, the ministry would introduce a 'non-university' sector comprising colleges and professional schools that would offer mainly three-year bachelor degrees. By this means, as well as by increasing the number of three year bachelor degrees offered by the core university sector, the ministry hopes to correct the preponderance of Slovak students taking longer (five year) degrees and thus free up more resources for incoming applicants.

To make such a reform possible, the university financing system will have to be overhauled and put on what the ministry calls a "multi-source" footing, possibly involving raising money from renting their buildings or hiring out their services.

Slovak universities still get 95% of their funding from the state budget, and if the ministry is to achieve its aim of raising spending on education by 0.1% of GDP per year until 2004, other sources of funds will have to be secured. "This includes the question of student fees, which is politically sensitive because the coalition is not united on the subject," said Ftáčnik, adding that while right-wing parties in the ruling coalition favour charging for all forms of university education, left wingers including Ftáčnik's own Democratic Left Party (SDĽ) would like to keep regular bachelors and masters degrees free.

Finally, to ensure that Slovakia meets EU requirements in the field of education and science, the Slovak system has to be made compatible with western forms of higher education, or "put into the context of European development" as Ftáčnik described. The process involves first transforming Slovakia's degree system into the western bachelor-masters-PhD model, and then introducing a nation-wide credit structure based on the European Credit Transfer System (ECTS), allowing the country's students to take courses and gain credits towards their Slovak degrees at western universities and vice versa.

"These commitments stem from the Bologna Declaration signed last year by the Education Ministers of 29 European countries, including Slovakia," explained Ftáčnik. "Europe is trying to make the outcomes compatible, so you can go to England, Denmark or Poland and say 'I have a bachelor's degree,' and everyone will know what that means."

The ministry document allows only a month of public discussion - until June 7 - and then will be used to draft an amendment to the 1990 Higher Education Act, as well as a new Law on the Financing of Education. Ftáčnik said he expected both bills to be submitted to cabinet by the end of this year.

"There were several attempts in the past decade to draft new legislation and present a vision of education, but they failed each time because the government's term ended and a new government came in and started from scratch," said Ftáčnik. "That's why we feel time is short, and the legislation must be introduced quickly."

So far, the limited public discussion generated by the ministry proposal has been generally approving of the plan, if critical of the 10-year delay in coming up with an education 'vision'.

Comenius University Rector Ferdinand Devínsky, one of the 12-14 authors of the proposal, said that financing was the most important area of reform to be undertaken. Advocating a fee system that would see all students pay 5,000 to 6,000 Slovak crowns ($120 to $140) per year for their studies, Devínsky said the introduction of fees would simply confirm the existing situation, in which competition for limited places at universities required students to hire tutors, take preparatory courses or study abroad if they hoped to pass entrance exams at humanities faculties.

"The simple fact is that we don't have any poor students at our larger faculties," he said. "If you aren't rich enough to send your kid abroad, you have to hire a teacher - and both are expensive propositions."

Ftáčnik agreed, adding that many universities already charged fees for part-time students or those who studied at regional branches of major schools. "The problem is that these fees are not regulated by law, as we would like," he said.

Devínsky also praised the idea of introducing a credit-based system of study, something Comenius was putting in place for its first-year students as of September 2000. By allowing students to take credit courses in other faculties, rather than simply handing them a five-year schedule of required courses in their chosen discipline, he said, schools would become more student-oriented, while communication between faculties would be enhanced and professors would be forced to improve their teaching methods if they wished to keep their classrooms full.

But not everyone is applauding. Ivan Mačura, a professor from the Pedagogical Faculty at Nitra University and president of the Slovak Teachers' Forum, said that the bright ideas concealed a decade of wasted time. "Comenius University - which by the way is the alma mater of all other Slovak universities - has also wasted a great deal of time. Isn't it strange that Comenius and its faculties are bringing in a credit system fully 10 years after November 1989, when some other schools have had this system for six years?"

Mačura also scoffed at the idea that Slovak universities could be made compatible with their European counterparts simply by passing a law stating them to be so. "We estimate that given the current situation, the real process of adapting Slovak universities to western European educational, ethical and moral norms will take 15-20 years," he said.

Deputy Foreign Minister Ján Figeľ, who is leading the charge to adapt Slovak legislation to European norms, agreed that the proposed laws for the education sector were more about "legal compatability" than true equality, and added that "I expect more from our education executive."

But apart from wringing their hands at a decade of missed opportunities, critics have not found many bones to pick in the latest ministry plan. Most agree that if the proposals ever become law, Slovakia's universities will be better off than they have been since 1989.

Ftáčnik, for his part, vows that the necessary legislation will be in place by 2001. There will even be a law providing for student fees, he promised, although it might not take effect until after 2002 since the current government wrote a promise of free education into its 1998 programme declaration.

Devínsky, too, was cautiously optimistic that real change was finally at hand. "You can't teach this colossus to high jump or to sprint," he said of Comenius University. "All you can do is hold the wheel tight and slowly change the course on which we are heading."