Poring over the usual pile of letters, faxes, memos and company directives she receives every day, 30 year-old Renata looks up and tries to recall why, before Czechoslovkia even split, she left her hometown of Nitra for the Czech capital Prague.
"My original reasons were firstly emotional reasons. But I stayed mainly for job reasons," explains Renata, a successful executive and head of press relations at one of the many foreign firms established in Prague. "I was never that strongly attracted to Bratislava as a town, and compared to Prague, the opportunities were not equal in Bratislava. There were not many business opportunities - that's why I've stayed." 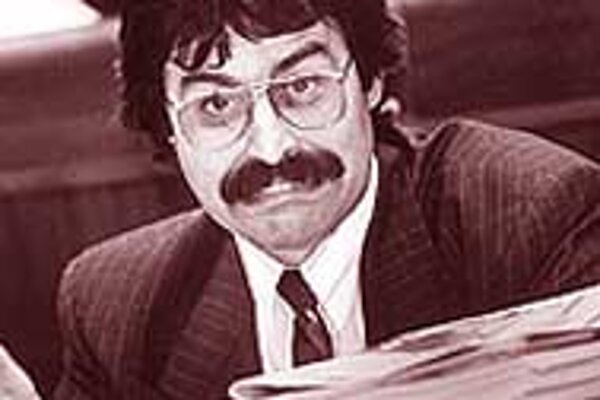 Font size:A-|A+  Comments disabled
Poring over the usual pile of letters, faxes, memos and company directives she receives every day, 30 year-old Renata looks up and tries to recall why, before Czechoslovkia even split, she left her hometown of Nitra for the Czech capital Prague.

"My original reasons were firstly emotional reasons. But I stayed mainly for job reasons," explains Renata, a successful executive and head of press relations at one of the many foreign firms established in Prague. "I was never that strongly attracted to Bratislava as a town, and compared to Prague, the opportunities were not equal in Bratislava. There were not many business opportunities - that's why I've stayed."

Renata's fate has been a common one for young Slovaks over the last 10 years. Figures show that since 1989, large numbers of Slovakia's most important human resource - young school graduates - have been leaving the country.

More than 10,000 people have legally emigrated from Slovakia since 1992, many of them in search of a better life. And while there are no concrete figures showing which age groups are leaving, polls conducted by the Bratislava-based Institute for Public Affairs (IVO) think tank indicate that the majority of the exiles are young, well-educated people.

While the figures have generated concern, however, there is now a growing feeling that following democratic changes in 1998, the Slovak 'brain drain' has not developed into the feared mass exodus that had been predicted a few years ago.

"There have been some positive examples of people coming back after the [1998] elections and contributing to the country's objectives," explained Grigorij Mesežnikov, IVO president.

Mesežnikov's opinion falls in line with that of many economists. "The situation is improving," explained Ján Tóth, a macroeconomic analyst at ING Bank in Bratislava. The change in government in 1998 when Mikuláš Dzurinda's coalition came to power, he said, has provided a more stable Slovakia, while potential accession to the European Union has left younger people more willing to at least consider Slovakia as a long-term home.

"If you look at the young people going abroad, now there is at least the hope that they will come back. It was much worse under the last government [led by Vladimír Mečiar's Movement for a Democratic Slovakia - Ed. note]," Tóth said. "People see EU entry coming up, and see that they could get the same benefits, potentially, as other EU citizens get."

Mesežnikov also believed that there may even be a silver lining to what on the surface appears a potential human resources disaster. "It causes problems when educated, skilled people leave, but it has many dimensions. The possibility for a person to travel and get an education abroad can be very good for a country... but only if they come back."

Will they come back?

Despite the feeling that the exodus has slowed, however, some business sector employers complain they are still watching many of the brightest and best of the country move to fresher pastures. But while they suffer, the root cause of the labour force exodus may lie partially with the refusal of some businesses themselves to pay talented Slovaks what they are worth.

"If someone else will pay better, why not [go abroad]?" asked Stanislava Luptáková of Comenius University in Bratislava. "Of course this is all harming domestic companies, but imagine having a hard-working, educated Slovak who could work in Europe but has to be employed on local wages. How long can you play on someone's feelings and say 'come back and work here for 10,000 crowns because it's home'?"

According to Luptáková, wages at many domestic firms are just not good enough to keep young, well-qualified people in Slovakia. She explained that many companies needed to develop a more long-term approach to their employees in terms of rewarding potential.

At home and abroad

While Renata went only as far as Prague, many young Slovaks head for the United States, a country whose economy has in the past been fuelled by immigration, and where the idea that the 'brain drain' is a long-term problem is beginning to be questioned.

"This so called 'brain drain' certainly isn't favourable for a developing country, but it isn't crippling. Think of all the Europeans who have gone to America in the last century, and western Europe is still in healthy economic shape," said Robert Hutchins, professor of labour economics at Cornell University in Ithica, New York State.

Hutchins's colleague, Robert Smith, explained that the 'brain drain' was actually a natural if early stage in the formation of a global, mobile workforce, although he conceded it could still spell problems for Slovakia.

"A country doesn't want to lose its best, especially in a knowledge-based world-wide economy," agreed Smith. However, he said, the logic of the process was inescapable: "If skilled, educated people are not receiving a fiscal reward commensurate with their talents, then these people will be lost to other countries with a wider distribution of income."

Slovak authorities admit they are concerned with current state of the Slovak labour market, particularly in the face of competition from richer, more glamorous economies.

"It's a tragedy, but what can we do?" said Lydia Výborna, press spokesperson for the Labour Office. "It is everyone's own business what they do. It's a problem for the government and the business community to solve. Young, educated people see what is on offer here, and that is why they leave," she said.

Among the professions most affected by the labour exodus is the health care industry, where qualified doctors and medical personnel have been leaving the country steadily over the last decade to pursue better-paying careers abroad. Health-care staff, as in many countries, are among the worst-paid workers in the economy. Salaries hovering around or even below the average wage (10,000 crowns) are normal for doctors in Slovakia, with nurses and others in the sector even further behind.

Katerína Slynková, 28, left Bratislava for Grand Rapids, Michigan after struggling to find enough money to pay her rent. She said that the opportunity was too good to miss.

"I left for many reasons, my curiosity to try somewhere different and live in a different country, to see different things, also to see if I could do it. Also, I left for the money and to have a better life. The future in Slovakia is not very encouraging," she said.

"I like difficult challenges and it was a challenge for me to be able to come to America, I mean all the tests I needed to pass and to succeeed with high-level education, because American medical education is the best."

After moving to America, Katarína began to realise exactly what had motivated her flight.

"In the beginning I didn't think much about the future. The biggest problem was that as a doctor I couldn't make much money at home, I made between 10,000 and 12,000 crowns per month. I also get a better education here and I can see now what America can offer me."

The future for Slovakia may be bleak if Katarína and Renata's tales become commonplace on the country's labour market. Renata, ironically, says she may soon be returning to Slovakia for work reasons. However, she adds that her stay will be only temporary, and that her work will probably eventually lead her back out of the country.

Katarína holds out little hope that she will come back to Slovakia soon, or even at all. "The problem is that I don't think that I can ever work in Slovakia as a doctor again. I just wouldn't be able to do what I can do here medically. The system is far behind here in Slovakia, and after seeing how it works in America, to go home where nothing is working at all is very hard."

Katarína now earns $35,000 a year - about 14 times what she made back home. "I don't think anything is going to change any time soon at home. It will take many years."