Sitting in his office on May 12, Jozef Markuš' voice was intermittently drowned out by high school students celebrating graduation outside. As the Matica Slovenská chairman half-heartedly raised his voice against the clamour outside, the obvious metaphor afforded the scene a deeper significance: these days Matica Slovenská is having a hard time delivering the message that its organisation and the traditional Slovak culture it champions are still relevant. Many Slovaks - especially a whole generation of young people more interested in things like travel, the EU, and mobile phones - seem to be wondering what Matica's mission exactly is, and why they should care. 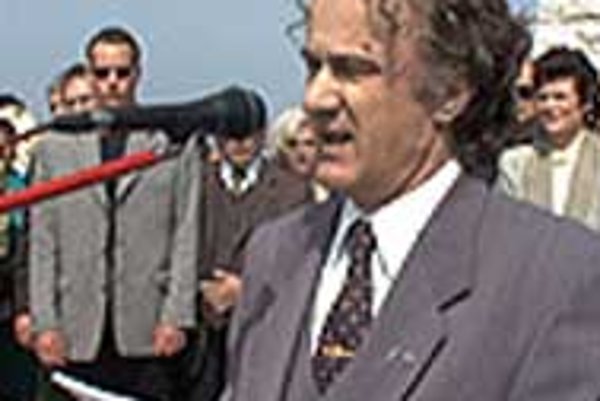 Font size:A-|A+  Comments disabled
Sitting in his office on May 12, Jozef Markuš' voice was intermittently drowned out by high school students celebrating graduation outside. As the Matica Slovenská chairman half-heartedly raised his voice against the clamour outside, the obvious metaphor afforded the scene a deeper significance: these days Matica Slovenská is having a hard time delivering the message that its organisation and the traditional Slovak culture it champions are still relevant. Many Slovaks - especially a whole generation of young people more interested in things like travel, the EU, and mobile phones - seem to be wondering what Matica's mission exactly is, and why they should care.

Matica was dealt a crushing blow by parliament that same day. As its leaders sat impotently in their Bratislava offices, a bill was passed wresting from their control the Slovak National Library and Memorial in the northern Slovak city of Martin, institutions that were at one time synonymous with the name Matica Slovenská. Although Matica had enjoyed a large budget and prominent place in the national limelight during the governments of former Prime Minister Vladimír Mečiar, their funding has been cut and restricted, and their activities closely audited since the new government came to power in 1998. Now, with its most prized possessions being usurped by the state, the future looks shaky for Matica, the once proud and solitary bastion of Slovak culture.

In the mid-19th century, when nationalism was rising as a force in eastern Europe, Slovaks were subordinate players in the Austro-Hungarian empire, unable to publicly express their language and culture. "Because of this discrimination, there was the instinctual reaction of self-preservation," explained Matica Slovenská secretary Alexander Števík, a burly, bearded man whose passions nearly overwhelm him when the topic is Slovak history. "Matica started the struggle in 1863 towards applying and developing Slovak identity in public."

With the separation of the Slovak state from the Czechs in 1993, Slovakia was finally no longer directly threatened by cultural hegemony. Still, the organisation argued that it was crucial for the young nation to maintain a strong sense of national history, and that Matica was the logical body to lead this charge. "At that time we set the goal of being the best and most comprehensive institute for Slovak cultural heritage," said Markuš.

The 1994-1998 Mečiar government agreed, giving Matica a large budget with few restrictions; Markuš' face became well known in newspapers and on TV as the organisation expanded its activities, funding various grants and awards, numerous festivals, and over 600 cultural institutions both home and abroad.

At the same time, however, the image of the organisation as a apolitical force changed. In 1995 the organisation was pulled onto the political stage when the programme declaration of the government included as one of the four pillars of its cultural policy that Matica be designated the most significant Slovak cultural institution. The Culture Ministry then drafted a 1996 law giving Matica the power to vet all textbooks for use in Slovak high schools.

Matica also became more aggressive in anti-foreign sentiment. On January 20, 1995 it issued a statement supporting "the protection of national culture from the influence of the foreign multinational pseudo-culture that is entering Slovakia, having a negative impact comparable with the import of drugs."

But the biggest blow to Matica's image may have come when it became involved in privatisation under the Mečiar government, purchasing the printing house Neografia in Martin and the cultural centre PKO in Žilina for one Slovak crown each in 1995. "In the past, Matica was an association of enthusiastic people," said Stanislav Mičev, director of the Ministry of Culture's Department of Inter-ministerial Affairs on May 15. "But now it seems like they are only Slovaks after money."

After the new government took power in 1998, Matica's budget was cut from 170 million crowns ($5 million at the time) which it could use as it saw fit in 1997, to 97 million crowns ($2.3 million) in 1999, 70 million of which was specifically earmarked by the Ministry of Culture for the Slovak National Library and Memorial. As a result, Markuš said, Matica had to close many of its daughter institutions and lay off employees.

The Hungarian Coalition Party (SMK) in Slovakia, which watched with growing alarm as Matica's influence and nationalist Slovak behaviour increased under Mečiar, has as part of the current government supported both the budget cuts and the library bill. SMK member of parliament Lášzló Köteles, who is also vice-chairman of Csemadok (a body promoting Hungarian culture in Slovakia), explained that the former government had taken money from all Slovak tax payers and directed it to a cultural organisation that supported only ethnic Slovaks. "The leaders of Matica Slovenská abused their function. They were doing things like trying to assimilate Hungarians by having us speak only Slovak," he said in parliament May 17.

While supporters of Matica claim that it is currently being punished for its association with Mečiar's HZDS party (a relationship Markuš adamantly denies), Andrea Doktorová, the director of the department of museums, galleries and libraries at the Culture Ministry, says that the new funding plan is simply a legal matter. "Matica Slovenská wants to be supported by the government but doesn't want to be controlled at all. As for the library, in the past when we wanted to allocate a sum of money to the National Library, it was filtered through Matica and reduced. It is completely normal that the government be responsible for the national library."

With the library and cultural memorial leaving its control, no one knows if Matica can retain a role in the future. "I think Matica Slovenská is useless. It had a reason to exist in the last century, but not any more," said Renata Kraliková, chairwoman of the Slovak University Council. "The leaders of Matica still seem to think that we are going to somehow lose our 'Slovakness.' I think the money that goes to them should go directly to fund Slovak cultural institutions, like films for example."

There are those, however, who still feel the tradition of Matica Slovenská is too important to just peter out. "Matica is the mother of Slovakia," said Beata K., a retired woman living in Kramáre who would not give her last name. "These students don't understand its importance. Since I am for Slovakia, I am for Matica Slovenská. To liquidate Matica Slovenská is a shame. The new government are still Slovaks after all."

Perhaps that's the hardest thing for Matica to swallow. At a press conference last Monday, sitting among copper busts of Matica's first chairman Bishop Štefan Moyses, Markuš read a statement full of fiery discord, vowing to resist the 'unjust' action of parliament. But the defeated expressions worn by Markuš and his colleagues hardly seemed to match the pluck of their words. After over 100 years of struggling against foreigners, Matica's leaders face the disheartening reality that they must contend with new enemies - enemies who are Slovak.