On August 15 Slovakia's newest, and perhaps most innovative, radio station hit the Bratislava airwaves. Known since January in other parts of Slovakia for its emphasis on quick news bites, less talk and more music, and especially for its traffic reporting, Radio Express (107.6 FM) began broadcasts in the capital with another feature new to the Slovak market - daily news reports in English. 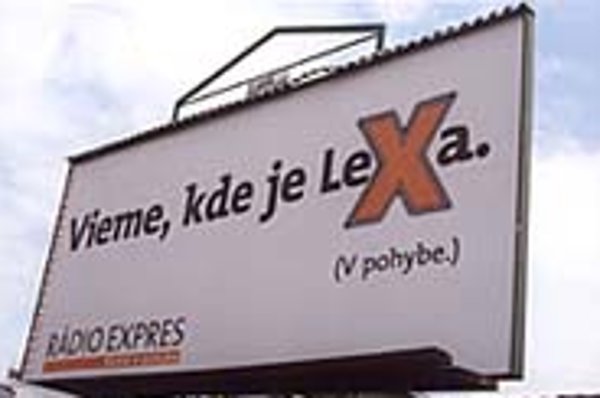 Font size:A-|A+  Comments disabled
On August 15 Slovakia's newest, and perhaps most innovative, radio station hit the Bratislava airwaves. Known since January in other parts of Slovakia for its emphasis on quick news bites, less talk and more music, and especially for its traffic reporting, Radio Express (107.6 FM) began broadcasts in the capital with another feature new to the Slovak market - daily news reports in English.

"More and more foreigners are living in Slovakia, as well as tourists visiting," said programme director Stanislava Benická. "We thought the time was right to give it a try."

Reports in English last three to five minutes and are broadcast daily at 9:00 am and 5:00 p.m. They consist of news briefs from around Slovakia as well as the local weather report. "We felt that the weather was one simple but important thing foreigners weren't getting here," said Eva Babitzová, the radio's marketing director. "Next year we may broaden the service to include information geared specifically towards tourists."

Express's move to English reports, however short, breaks new ground in Slovakia. CNN and BBC (TV as well as radio) provide news in English but do not specifically focus on Slovakia. As a result, foreigners that don't speak Slovak are left in the dark when it comes to basic daily news about their host country.

"I thought it was great," said American Phil Stantial, after hearing the broadcast for the first time on September 5th . "I've been living in Slovakia for three years and this was the first time I'd heard the weather report in English. Hearing Slovak news was also very helpful. It's a shame it's not on more often - 9:00 a.m. and 5:00 p.m. are tough times for me."

Radio Express, whose investors include the European Union and several western European banks, started broadcasting in other Slovak cities in January 2000, targeting listeners in their cars. Although Radio Express launched a 15 million Slovak crown ($320,000) billboard, print and television media campaign earlier this summer, no effort was made to promote the English news service. Instead, officials said they were mainly relying on word of mouth to attract listeners.

So far, no other radio stations report plans to follow Radio Express's lead in English language broadcasting. "I think the market is too small still," said Peter Balla, a DJ for the popular Radio Twist. "BBC satisfies the radio market for English news, and they would be the logical choice to fill the void for local information in English."

But the world-wide broadcasting giant, which breaks away from its international news twice a day for Slovak news in Slovak, says that the expat community is not its main customer in this country. "Our target audience are Slovaks interested in English language programming," said one official. "They can, of course, get all the Slovak news they need in Slovak."

Similarly, the little feedback Radio Express has received since August 15 has been from Slovak listeners. "Slovaks have enjoyed this service very much," said Babitzová. "It gives them a chance to practice their English a little everyday."

When asked why they didn't air news in English more frequently, Babitzová responded that Radio Express was still primarily geared toward Slovak content. "Although we are happy to provide this English service, we don't want to alienate our regular listeners."

It's not the English broadcasts, however, that has a group of Bratislava residents upset with Radio Express. The station's plans to build a new tower later this year on Hradný Vŕšok (Castle Hill) are being challenged by local residents who claim the tower would ruin the view that city residents have of the wooded Slavín promontory. They also fear that the electromagnetic waves might be dangerous. Roughly 1,000 have signed a petition trying to block the construction.

Officials at Radio Express, however, don't expect the petition to interfere with the new tower or their Bratislava broadcast. "It is strange, when you think of all the other radio - not to mention television - towers in Bratislava that no one complains about," said Babitzová. "Not that radio waves are dangerous in any case, but our tower is state-of-the-art, which means most other radio towers in Slovakia admit signals 400 times stronger than ours. And in terms of the view, there are many trees in the area taller than the proposed tower."