Shock waves from the decision of Parliamentary Speaker Jozef Migaš to support a vote of non-confidence in Prime Minister Mikuláš Dzurinda continue to shake the government. Some cabinet members now concede that early elections have become a real possibility, and say that Migaš' demand for a significant cabinet shuffle has created a large rift between the speaker's SDĽ party and its three ruling coalition partners.
After joining the parliamentary opposition parties in voting for Dzurinda's recall on April 14, Migaš continued his campaign against his coalition mates last week with a demand that some cabinet posts be shuffled and others cut altogether. 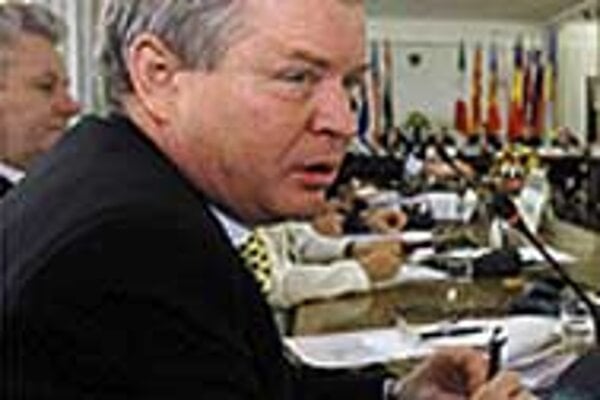 Font size:A-|A+  Comments disabled
Shock waves from the decision of Parliamentary Speaker Jozef Migaš to support a vote of non-confidence in Prime Minister Mikuláš Dzurinda continue to shake the government. Some cabinet members now concede that early elections have become a real possibility, and say that Migaš' demand for a significant cabinet shuffle has created a large rift between the speaker's SDĽ party and its three ruling coalition partners.

After joining the parliamentary opposition parties in voting for Dzurinda's recall on April 14, Migaš continued his campaign against his coalition mates last week with a demand that some cabinet posts be shuffled and others cut altogether. The parliamentary speaker, who is also the chairman of the ruling coalition SDĽ, has proposed that all four deputy prime minister posts be abolished, and their functions absorbed by various ministries; the SDĽ would also like to see the Privatisation Ministry abolished, and an audit conducted of each cabinet member's performance.

Many of Migaš' cabinet colleagues, however, rejected the proposed changes as being poorly thought out, and warned they could propel the country towards early elections less than two years into its four-year term. The SDĽ's perfidy, some of them said, was motivated by its desire to have a greater say in privatisation and economic decisions, a charge supported by political analysts who argued that Migaš and his colleagues were trying to save face in front of voters and defend business groups close to the SDĽ party.

Migaš told journalists shortly after voting against Dzurinda that he had chosen a radical path to resolve his dissatisfaction with the coalition because he felt the demands of the socialist SDĽ party were often ignored by its liberal and conservative partners. If the SDĽ continued in the government as it had until then, he said, "we'll be junior partners, they'll laugh at us, do things behind our backs and we will just help them. But we are not slaves of other political parties, we're not servants, we're equal partners. No one will use us to sweep the floor, no one."

In a more measured interview published a week later in the weekly paper Domino Fórum, SDĽ vice chairman Ľubomír Andrassy, who had also voted against Dzurinda, explained that his party had wanted to send a message to the prime minister that the country's economic problems were being ignored by cabinet. "The prime minister is responsible for the functioning of the government," he said. "The government is losing steam, and more than 40% of its voters have abandoned it. We have been unable to offer voters either solutions or jobs, and unemployment is rising."

The party leadership has explained that shaking the cabinet up would improve its ability to reach decisions quickly, something that would help the government deal with Slovakia's economic problems more efficiently. But the SDĽ's coalition partners replied that its actions were causing far more harm than good by creating the impression of political instability abroad.

"If the SDĽ doesn't realise the damage its actions are causing, then I concede the possibility of early elections," said Deputy Speaker of Parliament Béla Bugár, who although not a cabinet member, is chairman of the ruling coalition Hungarian Party. "Early elections would be a catastrophe for Slovakia, since they would mean the slowing-down of reforms, the worsening of Slovakia's international reputation and the lowering of living standards."

Bugár blamed the SDĽ for having raised the spectre of early elections during the confidence vote on Dzurinda, in which five SDĽ members had voted against the prime minister, six had supported him and nine had not voted. If the party had objections to the way the country was being run by cabinet, he said, "we can of course discuss changes, but it [a cabinet shuffle] would have to be done through negotiation, not unilaterally by one party and in this poorly thought-out way."

Deputy Prime Minister for Economy Ivan Mikloš, too, said he saw the likelihood of early elections as greater now than a month earlier, and noted the irony of Migaš' desire to improve the efficiency of the cabinet by reducing its numbers (see interview, page 5). Given the party's long-standing resistance to trimming the number of Slovakia's civil servants, he said, it was strange the SDĽ in its proposal for reconstructing the government had argued that "saving money within central state organs would set a good example for the reform of the state administration."

But perhaps the staunchest opposition to reducing the number of cabinet posts came from Pavol Hamžík, Deputy Prime Minister for Integration and head of the ruling coalition SOP party. "If Mr. Migaš wants to eliminate my post, he has to meet with me and get my approval," Hamžík told Markíza TV on May 2. "We expect proposals from the SDĽ that help to stabilise coalition relations."

As the stand-off between the SDĽ and its coalition partners continued this week, the costs of such political instability became apparent. Mikloš, for his part, warned that foreign investment and Slovakia's chances of being accepted by the OECD this summer could be hurt by the continuing deadlock, while Finance Minister Brigita Schmögnerová, herself a member of the SDĽ, added that the conflict could raise borrowing rates for Slovakia abroad. The Slovak crown, which had been trading at about 43.2 to the dollar before the Dzurinda vote, stood over 45.7 to the dollar at the beginning of May, a fall of almost 6%, as markets reacted with growing nervousness to the situation in Bratislava.

Andrassy, however, said that he was unaware of any disquiet among foreign investors. "To this day I am unaware of any negative reaction either from investors, foreign institutions or the European Union," he said.

But observers warned that if the SDĽ's proposals for the elimination of cabinet members were accepted, they could add to the damage already done by forcing the retirement of some of Slovakia's most respected politicians,. According to Grigorij Mesežnikov, President of the Institute for Public Affairs (IVO) think tank in Bratislava, statesmen such as Mikloš, Hamžík and Deputy Prime Minister for Human Rights and Minorities Pál Csáky had earned the country significant credit abroad. "The dismissal of such people, each of whom has an important agenda, would send a very poor signal," he said.

But Mesežnikov stopped short of predicting early elections, saying that not even the SDĽ welcomed such a drastic development. Instead, he said, the party's demand for a cabinet shuffle was simply a way of "saving face" with voters after having voted against Dzurinda in parliament - a move opposed by 70.8% of SDĽ voters, according to one recent poll.