Former Slovak Prime Minister and now Bratislava Mayor Jozef Moravčík has his hands full. Overseeing and trying to get off the ground new projects such as construction of a metro for the capital, a new business centre and the reconstruction of the old town are part of his everyday work. Having lived in Bratislava for 30 years, Moravčík wants to solve the problems that his fellow Bratislavans face every day.
The Slovak Spectator sat down with the mayor on April 19 to discuss the city's development plans at the beginning of the new millennium. 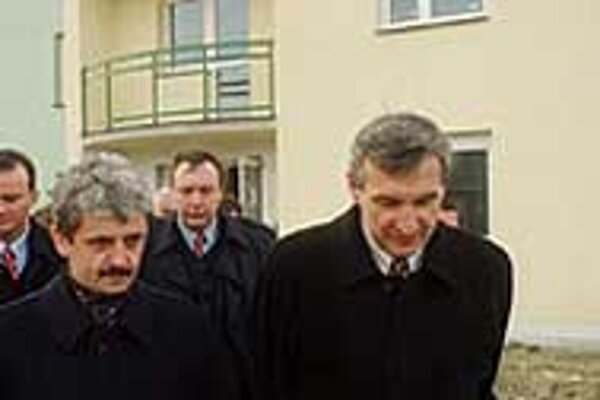 Font size:A-|A+  Comments disabled
Former Slovak Prime Minister and now Bratislava Mayor Jozef Moravčík has his hands full. Overseeing and trying to get off the ground new projects such as construction of a metro for the capital, a new business centre and the reconstruction of the old town are part of his everyday work. Having lived in Bratislava for 30 years, Moravčík wants to solve the problems that his fellow Bratislavans face every day.

The Slovak Spectator sat down with the mayor on April 19 to discuss the city's development plans at the beginning of the new millennium.

The Slovak Spectator (TSS): You used to be very active in politics - twice Minister for Foreign Affairs, Prime Minister of the Slovak government - and then you decided to run for mayor. What influenced your decision to make the move from state to local politics?

Jozef Moravčík (JM): Bratislava has a specific position, it's the capital and mirror of Slovakia. To be mayor of the capital is something special. Having this position one can do a lot for this country. This is what connects big politics with regional politics. I decided to stay in public life a little bit longer to put ideas I had into practice. These ideas also involved my living in Bratislava because I have been living here for more than 30 years. Moreover, if a person faces some problems every day, he or she feels like solving them. I wanted to try it.

TSS: Concerning Bratislava, what plans do you have? What are your priorities?

JM: My priorities have been clearly specified and we as citizens can see them. First, the absolute priority is infrastructure. There is an obvious need to create a transport system which would enable people to move from one side of Bratislava to another without any difficulties. We have already come up with some suggestions. Firstly, we want to finish the motorway divisions in the town. This project has a significant importance because when we finish the D2 motorway, running from Lamač to the Lafranconi bridge, and the D61, from Senická to Mierová street, people will be able to cross the town smoothly.

TSS: What's the deadline for this project and how much money did the town hall get for it?

TSS: Speaking of construction and transport, how do you see the idea of building a subway in the town?

JM: So far we have not focused specifically on this idea, but we are agreed that the subway won't be the 'heavy' type - used in metropolises of more than 5 million people - but the 'lighter' variety with lighter carriages. We have also discussed whether to build it only underground or to make it a combination of an overground and an underground subway system.

TSS: When do you plan to start building the subway system?

JM: If everything goes smoothly, we will begin construction next year.

TSS: Will you continue in co-operation with the French firm Matra, which has already started some construction on the project?

JM: Taking into consideration the investment of 500 million crowns that has been made into preparation, I think that we can continue in cooperation with the firms that have been already chosen. However, Matra is now owned by Siemens, which will then be a strategic supplier for the subway construction.

TSS: How much money will this construction cost?

JM: The first subway line, running from Petržalka to the town centre, the train station and Trnavské Mýto, which will be approximately 11 kilometres long, will cost around 15 billion Slovak crowns [$328 million]. If we have the money and start construction next year we would be able to finish it in 2003 or 2004.

TSS: What about your other projects concerning the revitalisation of the SNP Square and the pedestrian zone in PKO Park, that were started by your predecessor [Peter Kresanek, 1994 to 1998 - Ed note.].

JM: We are preparing the revitalisation of the southern part of the city (between the Danube and Bratislava castle) and the eastern (Staromestská ulica) part below the castle. We plan to build some new buildings there and join it with the Old Town. The key problem is the place in front of St Martin's Cathedral. We plan to rebuild it to make it an entrance way leading to the castle. We will move the traffic a bit down and build a tunnel there.

TSS: And when can we expect completion of this project?

JM: It depends on completion of the Košická bridge, if we have to block traffic to get access to Staromestská ulica.

TSS: Is this one of the main reasons behind building the Košická bridge [linking Košicka Street to Petržalka - Ed. note]?

JM: No, the main reason is that the Prístavný bridge [the easternmost of Bratislava's four bridges - Ed. note] is already overloaded. We plan to move local transport from that bridge to the new Košická bridge and to the new motorway section. Prístavný bridge would be used for transit vehicles [attempting to bypass the city - Ed. note]. Nowadays, if someone wants to get from Trnava to Dúbravka, he or she must cross the whole town and it takes much longer than the whole journey from Trnava to the outskirts of Bratislava. Therefore he will simply use the highway. The new bridge is planned to be built next to the Press Centre, which would also be rebuilt. We are already looking for investors into this area to build new high-rise buildings. These 30 to 40 storey buildings will change Bratislava's skyline.

TSS: What do you plan to change in the Old Town, the historical core of Bratislava?

TSS: What is the reaction to this from President [Rudolf] Schuster?

JM: The President and the Prime Minister agree.

TSS: Who are the sponsors for some of the big projects in Bratislava?

JM: They are mainly firms such as Siemens, Slovnaft, Volkswagen, almost all the banks, SPP and Transpetrol. We have to make all our projects attractive for sponsors from a business viewpoint. For example, if we allow a firm to build certain buildings in the centre then that firm is obliged to finance part of the centre's reconstruction. In that case the firm does not have to pay the rent for the place. Of course, everything must fit into the architectural proposal of the town.

TSS: Your predecessor was very active in the redevelopment of Bratislava, in terms of its architecture, to rebuild it, make it more attractive to tourists. Is your approach different from his, and if so, why?

JM: My approach is not different because it's necessary to continue in this direction, and I want to continue. It is a good direction, but it's not what is needed now for Bratislava. We have to build a new Bratislava for the 21st century, that is why I have proposed we build a new model centre for Bratislava. It is important also in terms of making a profit from the Danube River and building up the right bank of this river for citizens, for relaxaton and business activities.