Mečiar charged with abuse of power

The stand-off between the Slovak Police and the Movement for a Democratic Slovakia (HZDS) boss Vladimír Mečiar came to a dramatic head at 9:00 on April 20 when masked commando police units used explosives to blow down the front door of the ex PM's villa in Trenčianske Teplice and formerly charge him with abuse of power and fraud. The charges were related to alleged illegal bonuses totalling 13.82 million Slovak crowns ($321,000) Mečiar gave to various ministers during his last tenure in office from 1994 to 1998.
Slovak police had been publicly calling on Mečiar to act as a witness in the 1995 kidnapping case of the former President's son Michal Kováč Jr. for over a month, monitoring his home 24 hours a day in hopes of serving him with a summons to testify. 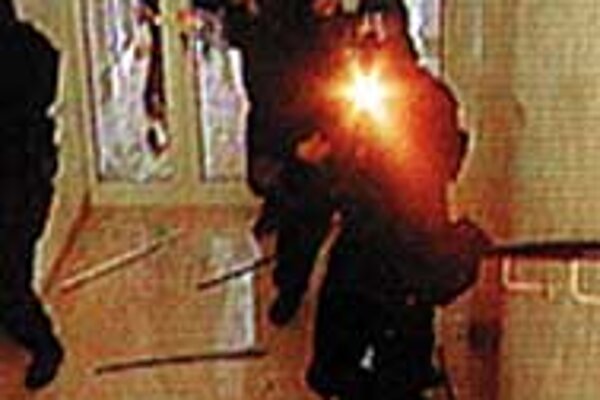 Font size:A-|A+  Comments disabled
The stand-off between the Slovak Police and the Movement for a Democratic Slovakia (HZDS) boss Vladimír Mečiar came to a dramatic head at 9:00 on April 20 when masked commando police units used explosives to blow down the front door of the ex PM's villa in Trenčianske Teplice and formerly charge him with abuse of power and fraud. The charges were related to alleged illegal bonuses totalling 13.82 million Slovak crowns ($321,000) Mečiar gave to various ministers during his last tenure in office from 1994 to 1998.

Slovak police had been publicly calling on Mečiar to act as a witness in the 1995 kidnapping case of the former President's son Michal Kováč Jr. for over a month, monitoring his home 24 hours a day in hopes of serving him with a summons to testify. He was also wanted for questioning concerning political sabotage (i.e. his alleged involvement in a 'campaign of discreditation' waged by the Slovak Intelligence Service (SIS) against then-President Michal Kováč) and for the bonuses. The police could not enter the villa by force, however, because Mečiar had not been charged with a crime.

That changed on April 19 when his status in the case of the bonuses was upgraded from witness to accused. The next morning, the police arrived at the villa at 8:00 and told Mečiar through a loud-speaker to give himself up. After issuing several warnings and receiving no response, the 'black mask' units moved in and blasted their way into the home.

Shortly before 9:00, Mečiar emerged from the villa, wearing a white shirt and a dark suit and tie, uncuffed and surrounded by the masked police. He was led to a waiting van and transported to Bratislava where he was officially charged for approving the illegal bonuses. When questioned about the kidnapping and the sabotage cases, Mečiar refused to testify, but was released later that day.

On April 26, Chief of Police Investigators Jaroslav Ivor told the Czech Press Agency (ČTK) that "it was illegal for Mečiar to refuse to testify on the political sabotage case. According to the Slovak law you can refuse to give testimony if it would endanger yourself or your family. But Mečiar refused based on amnesties he gave, which was rejected by the investigator. This is a criminal act that could cost him eight years in prison."

Police representatives said that the cases would continue to be investigated while Mečiar remained at large. If convicted for the charges concerning thel bonuses, Mečiar could face an additional 10 years in prison.

In Trenčianske Teplice, the scene after the arrest was surreal as stunned residents seemed unable to grasp the day's bizarre events. In response to an interview request that evening, a guard at Mečiar's estate said, "There's been enough today. Leave Mr. Mečiar alone already. Let him rest." He added that Mečiar would not be available later because he was leaving with his family on vacation.

In town that evening, locals were still steaming over the police raid. One pensioner in a pub said, "It was shocking. Terrible. They seized him like he was a murderer. Him... who made Slovakia an independent state! Shame on them!"

Opposition parties also expressed outrage, particularly over the surprising force of the seizure, which was caught on camera by a TV Markíza film crew camped inside the villa. The next day at a protest rally on Bratislava's Námestie Slobodý (see story, page 6), members of the opposition HZDS and the Slovak National Party (SNS) said that the country had deteriorated into a "police state."

But members of the ruling coalition defended the arrest, saying that Mečiar was not above the law and that as a normal citizen he had repeatedly failed to uphold his civic duty by refusing to heed calls by the police to testify. Furthermore, international observers and the Slovak public in general leaned their support in favour of the police.

Polls released immediately after the raid suggested that as much as 65% of the public supported Mečiar's detention, although the number slipped to around 40% approval for the violent means of the raid. The American Embassy in Bratislava, meanwhile, said that Mečiar should receive no special treatment.

"We understand that this action was taken in response to Mr. Mečiar's repeated refusal to comply with a summons to appear for questioning in connection with ongoing investigations into alleged activities of state authorities during his time in office," an embassy spokesperson said. "Slovakia has made dramatic progress in strengthening democratic institutions and respect for the rule of law in the past 18 months. In a democratic society no citizen can be held above the law."

Another leading western diplomat in Bratislava, who wished to remain anonymous, said that Mečiar had simply been served what he deserved. "Everybody is equal. If the police request an interview for something they want to check, that person should go," the diplomat said. "It's all part of the rules of the game. If [Mečiar] had nothing to fear, he would have gone to the police station quite happily."

Mečiar did not go to the police station, political analysts said, because he did not want the investigations of his last government to continue, and because he wanted to seize the opportunity to embarrass his opposition and mobilise his support.

"Mečiar wanted to create this kind of scenario, this theatre," said Soňa Szomolányi, Comenius University's Political Science Department head. "It was no coincidence that those TV Markíza cameras were waiting for the police inside. But he also refused to go to the police because he was not so keen on speaking to the investigator. He has things to hide."

Szomolányi added that the very fact that Mečiar can now be prosecuted is the result of a 1998 act of arrogance by the former PM, when he abandoned his seat in parliament in favour of Ivan Lexa, the former SIS chief who was allegedly also involved in the Kováč kidnapping case. "He would never have imagined that this could happen to him," she said. "He had so much power in his hands for so long... but he miscalculated the situation."

Grigorij Mesežnikov, President of the Bratislava-based Institute for Public Affairs, agreed: "It was a mistake by Mečiar. He wanted to save Lexa, and he didn't think that the investigation would touch him personally because he was and is so popular, he's the founder of the Slovak state," he said. "He hoped the investigation would not happen, but he underestimated the political will of the current government to investigate these crimes."

Both Szomolányi and Mesežnikov said that Mečiar had purposely allowed the situation to escalate in hopes of gaining support for the opposition while turning undecided voters against the government coalition. Both added that they believed the plan would not work.

"Voters are already politically polarised between pro- and anti-Mečiar," Mesežnikov said. "This won't give the HZDS more support. It could only affect the HZDS if the investigation reveals substantial findings confirming Mečiar's involvement. In that case, a part of the HZDS would probably try to distance themselves from Mečiar."

As for the coalition, Szomolányi said that contrary to the opposition's accusations, the raid had not been masterminded by the government, "This was the business of the police - the President and the Speaker of Parliament both complained to the media that they had not know about it," she said. "Besides, this certainly did not help the government gain any support."

Mesežnikov, meanwhile, said that how the arrest would affect the government still remained to be seen. "It could serve as a confirmation of their political will," he said. "On the other hand, if the investigation reveals nothing, they will be hard-pressed to explain the situation."