For Karl Peter Wilhelm, member of the board of directors at Volkswagen Slovakia, every second of business time is devoted to keeping one of Slovakia's great FDI stories a success. The fact that he was 45 minutes late for his interview with The Slovak Spectator on March 28th was thus no surprise. "The days sometimes seem to be shorter than they really are," he apologised.
VW Slovakia has long been the 'poster child' for foreign direct investment in the country, with exports worth 68 billion crowns last year ($1.6 billion, or 16% of Slovakia's total exports), a production target of 150,000 cars this year, and a planned investment of 400 million marks ($200 million) over the next two years. 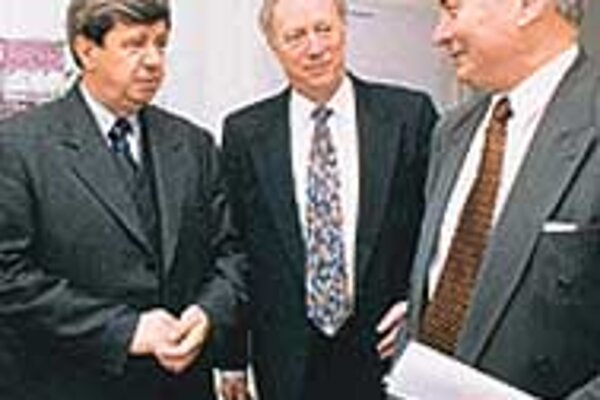 Font size:A-|A+  Comments disabled
For Karl Peter Wilhelm, member of the board of directors at Volkswagen Slovakia, every second of business time is devoted to keeping one of Slovakia's great FDI stories a success. The fact that he was 45 minutes late for his interview with The Slovak Spectator on March 28th was thus no surprise. "The days sometimes seem to be shorter than they really are," he apologised.

VW Slovakia has long been the 'poster child' for foreign direct investment in the country, with exports worth 68 billion crowns last year ($1.6 billion, or 16% of Slovakia's total exports), a production target of 150,000 cars this year, and a planned investment of 400 million marks ($200 million) over the next two years.

However, Slovakia has managed to attract far less FDI than have surrounding countries such as Hungary, Poland and the Czech Republic, and boasts few foreign firms that have been as successful as VW. We asked Wilhelm why.

The Slovak Spectator (TSS): How did you become so successful with your investment in Slovakia?

Karl Peter Wilhelm (KPW): I will use Michal Gorbachov's words: "If you make a decision too late, you will suffer." This is our story. After the transition of your country, we had to start somehow, to make connections, to spread our business. VW started the business [original investment in then-Czechoslovakia] at a time [1991] when it simply looked good to do it.

TSS: Slovak government officials say that your investment in Slovakia has been the "second most successful" after your headquarters in Germany. VW has been even more successful in Slovakia than in other countries like Poland, Hungary and the Czech Republic.

KPW: I don't like this kind of picture. Every country, every environment, every special situation presents a special task. We invested in Poznan [Poland] a long time ago. The investments paid off, and grew to match the needs of the marketplace, of customers and of our production capacity. Now I can see the results.

Look at Audi in the Hungarian city of Györ. They started as a company just for producing engines, but they also developed a new brand, Audi TT. The Czech Republic's Škoda is another successful story - they used to supply the eastern [European] countries but now with new products they are also managing in the west.

Now come back to Slovakia. Slovakia began as a small, poor country, that's why we did not begin with a big investment but with small projects. There is, however, a special situation here, since this company has an obligation to the mother company to do business without a high level of public involvement [in other words, keeping a low media profile - ed. note]. In 1991 to 1992 there was no need to increase process capacity [to constantly push production levels]. Later we had to attract people to work here who understood the term 'quality'. The money we got we used well in terms of quality, accountability, we simply did what we agreed to do. This is very important at the beginning, to gain a high level of trust.

TSS: What are the negative aspects other potential investors can face when coming to Slovakia?

KPW: I prefer this the other way round. We made a decision to come here, we thought it over properly but we were thinking in terms of a long term investment. We did this at a time when no one could foresee the [exact] future of this country. We made our decision regardless of the political or economic situation Slovakia could have faced. We did not consider forecast extremes to do business in this country. Of course, we faced some problems, especially at the beginning, and we still do. When we signed the contract, it took us a year to get an optional right executed for the main extension we needed. We agreed on the basic contract in 1991 but we could not get it on time. It cost us money.

Another obstacle we had to overcome all the time was the changing of laws and taxes. At a time when we had just decided to make a reasonable investment, the government introduced the import surcharge. It is not a good sign to foreign investors. We are a big company but when you think about the small ones, it represents a serious problem for them. Also, as a car producing company, we need a surrounding base of suppliers, especially when we are discussing long term FDI, because otherwise purchasing costs are too high. This is the case with VW Polo. In Spain, all of their suppliers are within about a 200 kilometre radius, while here in Bratislava we work in a much smaller area, with almost no suppliers nearby. In terms of competition this is a disadvantage, even though there is the advantage of cheaper labour costs.

TSS: Let's go back to suppliers. We can see some suppliers' investments in the car industry, for example, Johnson Controls producing dash boards, Dana Corp., producing axels, shafts, brakes and car profiles and Plastic Omnium which may be producing bumpers and body parts in your future industrial zone in Lozorno. Is it a coincidence that they have all come to Slovakia, or have you tried to establish a supplier network with them?

KPW: Every company wants to have suppliers nearby. Looking back in history, we started as a plant and the rest came later. I hate to say this, but too few companies came here at the right time. Other negatives are the lack of business support and no understanding of responsible co-operation. We've been trying to convince suppliers to come here, to build a network since we came here. Luckily, suppliers can now understand, relative to the past, the necessity to become suppliers not only for the domestic market but also internationally.

TSS: What is your co-operation with the Slovak government?

KPW: Concerning the government we have other problems. When you look at this location here, we have increased our work force in last five years from about 1,000 to 6,500 people. In the past, 60% of our employees were from the Bratislava region and 30% from surrounding areas. Since the unemployment rate increased [in the late 1990's], we have less than 30% of our workers from this area and more than 70% from other areas of Slovakia. The age of our employees also creates a problem. Most of them are between 20 and 25 and they come from far away. When they look towards the future, they think about their jobs, establishing a family and they see that both their work and homes are here. Consequently, if they decide to stay, they need to arrange accommodation here. And since 1991, since we have been here, the government hasn't made any progress on this issue.

TSS: Lots of small companies face difficult problems like complicated and excessive bureaucracy, corruption, problems with certificates at state offices. Does a large company such as VW go to low-level officials to get certificates, or do you use your contacts at the ministries to get around the process?

KPW: What do you think we are? (laughs) You think we can get anything for free, that if we want something we will simply get it? This is not how it works. Everyone has to understand that we have to obey the rules, the laws in this country. Here we are a company, subordinate to this system, we are not above the law. We also suffer the same problems as other companies here. The advantage we have is that we have been in business for quite a long time and we have already established some connections, so we can face the difficulties more easily compared to companies that have just started.

TSS: Does VW get any above-standard treatment by the Slovak government?

KPW: The government and others have to see that there are different levels. When we talk to ministers, we can see they try to help us, to contribute to the success of this business. We also listen to public voices, we need their involvement and we have to assure them that we are doing our best. However, sometimes when we need to get a stamp for approval, we are obliged to wait until the officer goes over all the administrative documents. In other words, at the bottom level it [bureaucracy] is still difficult to deal with.

KPW: Let's talk in general. It's not just a question of who is doing what but also how fast and when. For instance, some companies trying to put some business into this country face problems with ground [real estate] provisions. There are not such incentives there. Companies then find a location in other countries and spread their investments there.

TSS: Can you then say that the incentives in countries like Hungary and Poland are better?

KPW: At least they started earlier, when there was nothing here.

TSS: VW has been in Slovakia long enough to experience the changes in Slovak governments, and even some domestic businessmen confess that it was difficult for them to co-operate with the state during the former government of Vladimír Mečiar. They see more willingness from the present one. What is your experience?

KPW: Since we have plants in other countries, we have worked under various kinds of governments. Yes, here we had a different situation, from 1991 until 1995, compared to the one we have now. We try to work strictly on an economic basis. I think being involved in political discussions does not help economics. Sure, everyone wants to work under the best government, but in the long term, business has to stay independent. Regardless of who was in charge, we have developed our business here and succeeded.

TSS: It has become a kind of tradition here in Slovakia that big companies support the government or some political party. Have ever been approached by a political party?

KPW: No, never, thank God. I know you can do business without that, and that's it.

TSS: What about your future?

KPW: Our main goal is to set up a supplier base. We are trying to set up an industrial zone. In which area no one knows yet. It will be a last-minute surprise.

TSS: What about rumours concerning the Lozorno industrial zone [30 kilometres north-west of Bratislava]?

TSS: When will we know the final decision about the future industrial zone?

KPW: As soon as we sign the contract. Hopefully this year.

TSS: If the industrial zone is to produce another model of VW, there will be three models of VW in Slovakia produced concurrently. That, after Germany, will be the 2nd largest production plant in terms of the number of brands produced. Why Slovakia? Why not another country?

KPW: Maybe we have done a good job here in the last couple of years. Here is a plant that is 100% owned by the VW company. In the Czech Republic, there is Škoda. In Hungary, we have Audi. In Slovakia we have Volkswagen.