Vladimír Mečiar's opposition Movement for a Democratic Slovakia (HZDS) held a 'transformation' conference in Trnava on March 18 during which it declared itself a standard political party, changed all five of its previous vice-chairmen, and publicly declared its support for Slovakia's western ambitions.
Mečiar, who has been Slovakia's prime minister three times in the past decade, said that the party was changing its face to become more acceptable to domestic political partners and to western countries. The HZDS hopes to gain membership to the European Democratic Union, an organisation representing European centrist and people's parties, which has in the past rejected Mečiar's HZDS party. 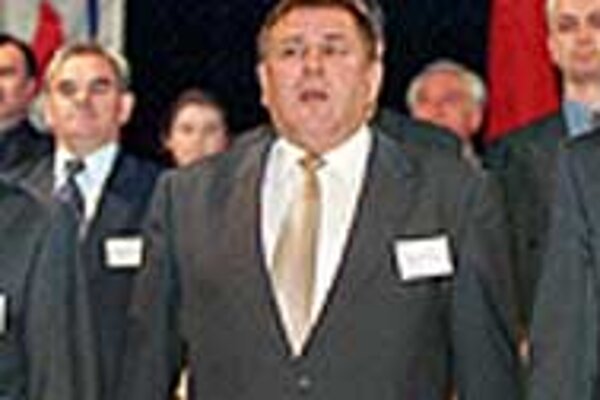 Font size:A-|A+  Comments disabled
Vladimír Mečiar's opposition Movement for a Democratic Slovakia (HZDS) held a 'transformation' conference in Trnava on March 18 during which it declared itself a standard political party, changed all five of its previous vice-chairmen, and publicly declared its support for Slovakia's western ambitions.

Mečiar, who has been Slovakia's prime minister three times in the past decade, said that the party was changing its face to become more acceptable to domestic political partners and to western countries. The HZDS hopes to gain membership to the European Democratic Union, an organisation representing European centrist and people's parties, which has in the past rejected Mečiar's HZDS party.

But diplomats and political professionals said that while Mečiar remained at its helm, the HZDS had only a slim chance of achieving its declared aims. A recent change to the party's statutes giving Mečiar the exclusive power to nominate vice-chairmen had made the HZDS more a one-man band than ever, they said, an observation borne out by the fact that the HZDS chairman faced no competition in re-election to his post on March 18.

Although western diplomats largely blamed the HZDS for Slovakia's being derailed from the fast-track group of European Union (EU) and NATO candidate countries in 1997, Mečiar told the Trnava conference of 400 delegates that the party was now firmly behind entry to western structures. "There is no other way for Slovakia except NATO and EU membership," Mečiar told the delegates, who proceeded to adopt a resolution supporting the goals declared by the chairman.

Mečiar also apologized for the "mistakes" he said the HZDS had made while heading the government from 1994 till 1998, in particular for "the imperfections in our relationship with the United States."

But the positive public declarations from the HZDS in favour of western bodies may have come too late. Hans-Peter Martin, co-chairman of the Joint Parliamentary Committee of the European and Slovak Parliaments, said on March 21 that there were now two unwelcome politicians in central Europe: Austria's Jörg Haider and Mečiar. "If Mečiar gets into government again, Slovakia will probably have to face the same international isolation as Austria does now," he said.

Former US Ambassador to Slovakia Theodore Russell, who was stationed in Slovakia during the former Mečiar government, told The Slovak Spectator on March 20 that the "imperfections" Mečiar had mentioned were the result of the political intolerance shown by the HZDS during its reign. "We tried to explain to them [the HZDS] that they should not govern the country with that kind of politics," Russell said. "But the HZDS just kept saying that we were wrong."

Nor did Mečiar's clean sweep of his vice-chairman make believers of domestic politicians that the HZDS had transformed into a normal political party rather than an ideologically-ambiguous 'movement' founded on the charisma of one man.

Five new vice-chairs were elected according to an internal HZDS rule approved in early March which gave the chairman of the party the power to nominate candidates for the seats. All of the candidates proposed by Mečiar were elected. Gustáv Krajči, Vojtech Tkáč, Sergej Kozlík and Rudolf Žiak were replaced by Ján Gabriel, Jozef Kalman, Miroslav Maxon, Zdenka Kramplová and the virtually unknown 24-year-old Jozef Božík in a manner that even some HZDS delegates said was heavy-handed.

"Božík had to be voted on twice because most of us didn't know who he was," said one HZDS delegate from eastern Slovakia who asked not to be identified. Oľga Keltošová, a HZDS MP who also served as Labour Minister in the 1994-98 Mečiar government, said in an interview with the Domino Fórum weekly paper that most of the vice-chairmen had found out from the press leading up to the conference that they were not to be re-elected. "As far as Mr. Tkáč and the other vice-chairmen are concerned, I think they should have been told beforehand that they weren't in the game," she said.

Such a dramatic shake-up in leadership posts was not unprecedented for the HZDS under Mečiar, said Ľuboš Kubín, a political analyst with the Slovak Academy of Sciences, and simply showed that the HZDS had not departed in more than name from its old modus operandi. "Mečiar changes his close colleagues approximately every two years. This was no surprise at all," he said.

As for Mečiar's re-election as chairman, none of the party's regional wings fielded a counter-candidate, and the Trnava conference confirmed him virtually unanimously, with only one abstention - that of Mečiar himself. "I don't know [why there were no other candidates]," Mečiar told the Pravda daily in an interview published on March 20. "Anyone could have come and proposed anyone. In elections for chairman there can be as many as 10 candidates."

Nevertheless, despite the authoritarian atmosphere at the conference, Mečiar declared the HZDS to have been transformed into a normal party. "We have defined ourselves as a slightly rightist political party with the ambitious goal of modernising Slovakia," Mečiar said. "We are potential partners for various parties."

But according to Timothy Haughton, a political analyst at Comenius University, it was still difficult to characterise the HZDS as a standard political party. "The HZDS can best be described as a rally party, drawing support from a variety of ideological positions, but even that classification is problematic," he said.

More of the same?

Despite general agreement that little of substance had happened in Trnava to change the HZDS's profile, Keltošová suggested that real change might not be far off. If Mečiar remained a barrier to western diplomats, she said, party members would be forced to choose between loyalty to the chairman and their support for the HZDS's western ambitions. It was not beyond question, she added, that in such a situation Mečiar might leave the active leadership of the party to someone else and become honorary chairman. While denying that she was interested in Mečiar's position herself, she said that enough party delegates supported reform to make real change possible.

"We have two years in front of us [until the next elections]," she said. "We [Keltošová and Tkáč] are not political suicides coming out [for reform] alone. "You always have to have support behind you, and you have to feel it."

Mečiar, for his part, rejected the idea that he might leave the party chair. "Why should the HZDS get rid of a leader who was successful four times in elections, who three times led a government and who basically built this state?" he asked.

As to whether Mečiar's new pro-western, reformist stance was genuine, former US Ambassador Russell said he would exercise caution in coming to conclusions. "Believe but verify," Russel said, using a phrase coined by former US President Ronald Reagan.