On March 14, 1939 the first independent Slovak state was created with the backing of Nazi Germany. Sixty-one years later, the country's citizenry was still divided on whether to celebrate the anniversary or vilify the state and its leader Jozef Tiso as fascist and anti-Semitic.
The anniversary has traditionally seen gatherings in the nation's capital in support of both sides, and this year was no different. Slovak Police Vice-President Jozef Petráš said his forces had been mobilised in response to the heightened threat of riots during the planned March 14 demonstrations and in order to assure the protection of the 170 European rabbis holding a conference at the Hotel Danube (see story, page 1). 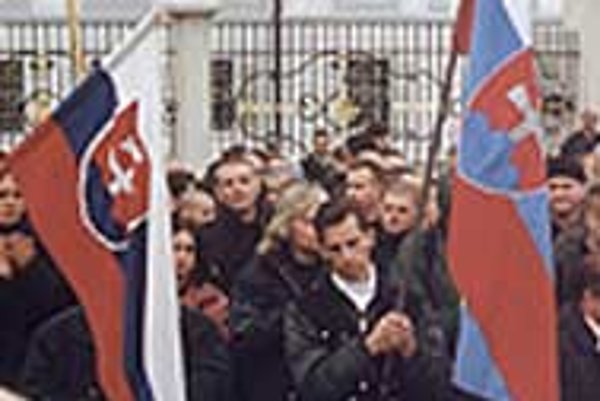 Font size:A-|A+0
On March 14, 1939 the first independent Slovak state was created with the backing of Nazi Germany. Sixty-one years later, the country's citizenry was still divided on whether to celebrate the anniversary or vilify the state and its leader Jozef Tiso as fascist and anti-Semitic.

The anniversary has traditionally seen gatherings in the nation's capital in support of both sides, and this year was no different. Slovak Police Vice-President Jozef Petráš said his forces had been mobilised in response to the heightened threat of riots during the planned March 14 demonstrations and in order to assure the protection of the 170 European rabbis holding a conference at the Hotel Danube (see story, page 1).

At 11:00, supporters of the first Slovak state met under cloudy skies at Tiso's grave in Bratislava's Martinský cemetery as police helicopters buzzed overhead. Lead by Stanislav Pánis, the boss of the ultra-nationalist group Slovenská národná jednota (Slovak National Unity), the crowd of around 250 skinheads and senior citizens walked to Hodžovo námestie where they held an afternoon rally in front of the President's Palace.

Later that evening, some 3,000 anti-fascist supporters gathered in the Old Town's Hlavné námestie (Main Square) for a rain-soaked rally called "Concert for Survivors." Participants apologised for the actions of the first Slovak state and urged the audience to reject all forms of intolerance.

Although the city was noticeably on edge the whole day, both rallies went off without a hitch, and city-wide the police reported no significant disturbances. Instead of the day of violence that police and citizens had feared, March 14, 2000 turned out to be a sombre day of reflection.

"We are very sorry"

"During World War II many sad things happened in Slovakia," said Yxo, the leader of the Slovak pop band Hex at the Concert for Survivors rally. "Now, we have to say that we are very sorry for it."

The main 'sad thing' Yxo referred to was the forced deportation of some 70,000 Slovak Jews to Nazi concentration camps during the Holocaust, a reference the predominantly young crowd on Hlavné námestie echoed throughout the evening. Flashing peace signs and wearing placards reading "Do not give fascism a chance. Stop nationalism, racism, anti-Semitism - concentration camps never again!", rally-goers stressed the importance of remembering past mistakes.

"During that time Slovakia was a country I would not have liked to live in," said 22-year-old university student Tomáš Mužlay. "We were killing our own citizens. Now I don't see how we can commemorate those people which governed Slovakia."

The concert was co-organised by Slovak NGOs Charta 77 and Hlava 98. Charta 77 head Zuzana Szatmáry said it was important that famous Slovaks promote anti-fascism. "We need to influence young people in a positive manner," she said. "There is no better way to do so than by having them see their famous stars on stage telling them that fascism is a very bad thing. Only stupid people celebrate those times [of the first Slovak state]."

"I'm not so naive to say that all the people here have realised the extent of the tragedy," said Robert Haas, chairman of the Slovak Union of Jewish Youth. "But it's a nice gesture. Slovakia has definitely taken a big step towards tolerance."

Had Haas been at the Hodžovo námestie rally hours before, however, he may have had less reason for optimism. There, as police and soldiers in fatigues looked on, a mixed crowd of elderly citizens and young men with shaven heads carried framed pictures of Tiso and spoke out against his detractors.

"Tiso was a good man," said 72-year-old Anna at the Hodžovo rally. "It isn't true what other people say about him, he wanted to protect our nation. I come here every year, I am proud of him and the country."

The Slovak skinhead movement also usually professes its admiration for Tiso, who was hung in Bratislava's SNP square as a war criminal in 1946. However, the skinheads present at this rally refused to speak to the press because, as one of the youths said angrily, "the media always changes our words and turns them against us."

The views expressed on the city streets were duplicated on the Slovak political scene, where the anti-fascist supporters far outweighed the pro-Tiso minority. Coalition government parties were predictably united in voicing their belief that Slovakia should not commemorate the WWII Slovak state.

The opposition Movement for a Democratic Slovakia (HZDS) also issued an official statement condemning the celebrations. "We don't see the current Slovakia as a continuation of that state which killed Slovak Jews and all opponents of the regime," the statement read. "There were anti-democratic rules we can not agree with."

Party boss Anna Malíková also chose her words carefully, saying the state was neither positive nor negative. "No historical event has ever been black or white," she told the SITA press agency on March 8. "But I do want to say that Tiso was not a war criminal."

On the other hand, Valerián Bystrický, the head of the Slovak Academy of Science's History Institute, told the Sme daily on March 14 that the leaders of the first Slovak state should have been held responsible for their actions. "The deportations [of the Slovak Jews] weren't organised by the Germans, but by Slovak officials," he said. "Therefore, the responsibility lies with them, including president Tiso."