Few events in Slovak history remain as controversial as the decision of the Slovak provincial assembly on March 14, 1939 to declare independence from Nazi-dominated Czecho-Slovakia. 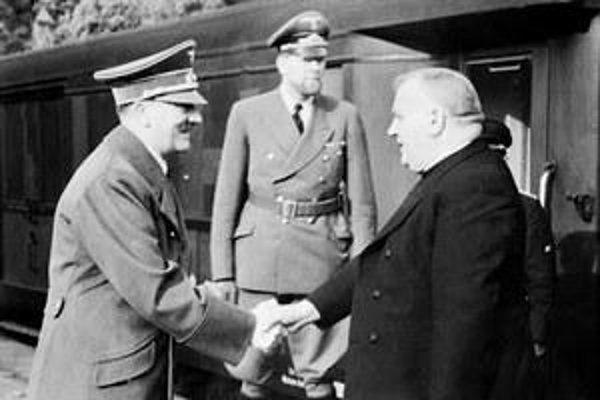 In declaring independence, the Slovaks were taking their affairs into their own hands, accepting that the post-Munich Czecho-Slovak government could do nothing to protect them against territorial demands by Poland and Hungary. At the same time, however, the Slovak declaration of independence represented a coming-to-terms with Nazi Germany, and at least acceptance if not support for some of the acts the Nazis would later demand - such as the deportation of over 70,000 Slovak Jews to death camps in 1942.

Slovak leader Jozef Tiso, a priest who sparked the independence vote in parliament after meeting Hitler in Berlin on March 13, 1939, has always been a lightning rod for fiery emotions about the World War II Slovak state. Elected President of the Slovak Republic on October 26, 1939, Tiso was later tried and executed as a war criminal; many Slovaks, however, are even now reluctant to condemn him, saying that as the leader of a nation within Nazi Germany's sphere of influence, Tiso could have done little else to save his country from the destruction wreaked on many of Germany's enemies.

In 1995 The Slovak Spectator interviewed Anton Rašla, the lawyer who prosecuted Tiso in the 1946 trial that preceded his execution. The interview is reprinted below.

The Slovak Spectator (TSS): Slovakia sent troops into Poland to assist the Germans when they invaded that country in September 1939. How did Tiso, a Catholic, justify sending the Slovak army into Poland, a profoundly Catholic country?

Anton Rašla (AR): Tiso maintained that he had no serious option other than to comply with Hitler's plans. As he explained his thinking to me, Slovakia was surrounded by enemies: only Germany could secure the survival of the Slovak nation against the Czechs or the Poles or the Hungarians or the Bolshevik Russians. Nor was Slovakia strong enough to defy Hitler - Tiso's words, not mine. To defy Hitler, he said, would only have resulted in Slovakia being destroyed by Germany and divided up between its neighbors.

TSS: In light of what you've just said, could one today reasonably argue that Tiso was a patriot, that he acted in the best interests of the Slovak people?

AR: No. The only people then who could be considered patriots were those who tried to keep Czecho-Slovakia together. So that does not include Tiso.

Tiso always believed Hitler would win the war. Always. Even after Hitler committed suicide... Tiso sent a telegram to Admiral Dönitz congratulating him on becoming the new Fuhrer, and wrote Dönitz that Slovakia and Germany must always remain faithful and loyal to one another and continue to fight on until final victory over Bolshevism.

TSS: When he cabled Dönitz, Tiso was himself hiding in Austria. Had he gone mad? Why would he think a Hitler-less Germany could defeat the allies?

AR: He wasn't crazy, he was a fanatic. Hitler had written Tiso that Germany possessed wonder weapons that would soon destroy England and France and win the war against Russia. Tiso believed this, believed Hitler absolutely. The Russians in Slovakia, the English and Americans in Austria, Hitler's suicide - none of these things changed Tiso's belief that Hitler's Germany had made and was about to deploy secret weapons that would win the war: if Hitler was dead, then it only meant that Donitz had them. And it was simply a matter of time before America and England realized their mistake and broke their alliance with Russia - then Germany and of course Slovakia would join the Western powers against the Russians.

Of course, Tiso was very surprised when the Americans handed him over to us [Tiso was caught by American intelligence hiding in Austria and handed over to the Slovaks in 1945 - ed. note]. Tiso was convinced he would be sent to America where he would be allowed to live on a little farm in exile. Tiso was certain the Americans would see him as a crusader against the Bolsheviks. When he surrendered himself to [US Intelligence Official] John Spiegler, he told him he would willingly go with him or to the English but that he was not to be surrendered to the Russians. He was very afraid of that.

TSS: Slovaks cannot be considered an Aryan people as that term was understood according to the racial policies of the Third Reich. Tiso obviously understood this, so how did he imagine a Slavic nation such as Slovakia fitting into a Europe run by hopelessly superior Aryan Germans?

AR: Tiso did understand this. But remember, Tiso believed Hitler completely. He believed Slovakia would become a sort of "reservation," that HItler would show mercy on Slovakia so long as he co-operated fully with Hitler's plans, with which he agreed anyway. This included sending Slovak troops into Poland, and of course, sending Slovak Jews to Auschwitz.

TSS: So Tiso made a sort of Faustian bargain with Hitler?

AR: No, Tiso believed in Hitler...

TSS: So he didn't sell his soul?

AR: No...Tiso told me he believed Hitler was "God's instrument" on earth.

TSS: This then brings us to the question of guilt. Tiso telling you he anticipated a comfortable exile in the United States suggests to me an absence of guilt on his part.

AR: Tiso was certain history would show that he had been right. As for "guilt", he felt none. We confronted him about the Jews sent to Auschwitz. Tiso replied that a lot of Slovaks went to Germany to work, that he wasn't interested where in Germany they went, as this was impossible to keep track of anyway, there being so many, and if some of Slovakia's Jews were sent to Auschwitz, why should that have meant anything to him... no one knew what was going on in Auschwitz, including himself.

TSS: But I believe there was a moment during your interrogation that you confronted Tiso with a document initialed by him confirming the deportation of Jews to Auschwitz?

AR: Yes, but Tiso only shrugged his shoulders and said "Oh, well, I don't remember, so much was happening" etc., etc.

TSS: What was your personal view of Tiso, of Tiso as a man? Do you believe Tiso was evil?

AR: Tiso was a very sophisticated man... A sophisticated man who thought Dönitz possessed an arsenal of wonder weapons bequeathed to him by Adolf Hitler. I told you before, Tiso believed Hitler, and that is what Hitler told him. Many sophisticated people believed in Hitler - you cannot understand what kind of an influence a man like Hitler could have over someone like Tiso. Hitler was a fanatic: so was Tiso, a religious fanatic. I told you before, he thought Hitler was God's instrument to destroy atheistic Bolshevism and to redeem the Slovak nation in the process.