Relics of the past, Trabants and Tatras defy efforts to junk them

The putrid fumes of the big MAV Bratislava bus that blacken the morning air are no match for the stream of smoke pouring out of the tiny rusty East German Trabant struggling to pass. Passengers scurry to the window to point and laugh at the spunky communist-era car, which Slovaks call a "vacuum cleaner" due to the trademark sound of its sputtering engine, huffing and puffing its way up a hill.
Sightings of relics like the Trabant and other old communist-produced cars are increasingly rare today, but not rare enough for government officials concerned with the environment and highway safety. 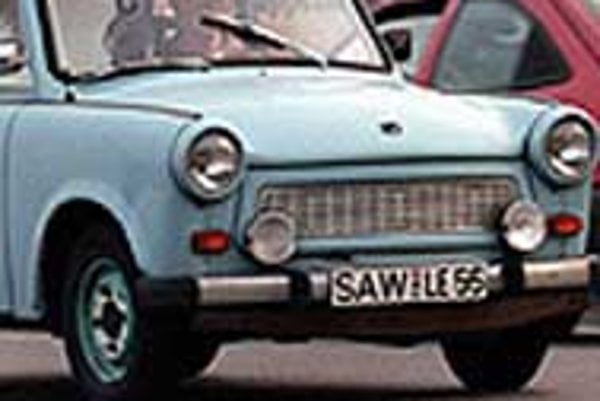 Font size:A-|A+  Comments disabled
The putrid fumes of the big MAV Bratislava bus that blacken the morning air are no match for the stream of smoke pouring out of the tiny rusty East German Trabant struggling to pass. Passengers scurry to the window to point and laugh at the spunky communist-era car, which Slovaks call a "vacuum cleaner" due to the trademark sound of its sputtering engine, huffing and puffing its way up a hill.

Sightings of relics like the Trabant and other old communist-produced cars are increasingly rare today, but not rare enough for government officials concerned with the environment and highway safety.

Due to the strict standards which are applied to older cars, owners are finding it increasingly difficult to make their aging autos roadworthy. However, don't expect these vintage cars to disappear any time soon, as a strong contingent of enthusiasts undoubtedly ensure their future on Slovak roadways.

Ondrej Ertl, President of the Bratislava-based Tatra Auto Klub Slovakia, began collecting the Czech made Tatra in 1986, and through the years has owned several classic models. In its heyday just after World War II, the Tatra was the automobile of choice for top communist officials and diplomats due to its sleek styling and ominous presence.

This reputation carries to today. "Tatra is a 'blue-blood' car worthy of many hours spent in the garage," said Ertl. "The relationship between a man and the car he loves is often a marriage for life. This is not typical of Slovakia in general, but it's very true for Tatra lovers throughout the world."

Much of Tatra's unique character and fame, Ertl explained, came from the fact that it was the second-oldest automobile manufacturer in the world next to Mercedes-Benz that was still producing cars today. The first Tatra car (the Président) took to the streets in 1897, and a legacy of technological advances defined its early years.

Among other innovations, the automobile pioneer introduced the concept of an air-cooled engine and produced the first aerodynamic car in the world in 1934 with the Tatra 77. The Tatra T700 is still made today in the Czech Republic, though the manufacturer now concentrates on truck manufacturing.

Chairman of Wartburg Trabant Club UK, Peter Frost from Wembley, England, spoke with similar enthusiasm about his 1989 Trabant 601 Saloon, which boasts the distinction of being manufactured the same month the Berlin Wall fell. Trabant halted production altogether in 1991.

"The car is special partly because of its character, but also its unique, simple technology," he said. "The two-stroke engine is completely simple - it's only has five moving parts. To me, it's almost like a mobile museum piece. It's a piece of history that you can drive around."

Both Frost and Ertl said that while driving, the unique character of their old cars - rattling engines, sluggish top speeds and unusual appearance - attracted curious glances from other drivers and passersby. Often, complete strangers felt compelled to stop and ask about the old cars.

Unfortunately for enthusiasts like Ertl and Frost, the love they have for their cars is matched only by the number of restrictions the cars must adhere to as dictated by the Slovak government.

Marian Rybiansky, a representative of Slovdeka - a private company delegated by the Minister of Transportation for inspecting motor vehicles - said that there were complicated guidelines listing approximately 100 criteria with subcategories specific to the make, model and year of individual vehicles which specify what a car must comply to in order to be considered roadworthy.

"The older cars are not like new cars," said Rybiansky. "There are problems with environmental and safety concerns. The Minister of Transport wants new cars on the road."

According to Transportation Minister Jozef Macejko, although stipulations do not distinguish technical capabilities specific to a car's age, if a car fails to meet one criteria set down by law, it is not considered legal to drive.

"A car must meet all construction requirements, must not jeopardise the health of people during driving, must not damage roads, and must meet approved technical capabilities and emission controls," said Macejko, adding that he thought it would be better for the environment to rid the roads of communist-era cars.

For the vintage car enthusiasts, the requirements are cited as unfair. Frost described many of the initiatives to get older cars off the roads as "misguided" and based on pressure from automobile manufactures who want people to buy new cars.

For example, Frost mentioned the government constraints on exhaust emissions. If one compared a small, old car like the 89 Trabant that gets 50 miles to gallon (5.5 litres per 100 km) to a new car getting 20 miles to the gallon (13.9 litres per 100 km), the latter actually emit more pollutants per kilometer driven. Plus, there's the environmental impact of actually producing a new car, which is not taken into consideration in the government's cold war against Trabants and Tatras.

Regardless, the fact that many Slovaks do not have the money to purchase a new vehicle, combined with the "fix it" spirit among many owners, means that vintage cars are in little danger of disappearing.

"All historical cars are regularly checked by authorities and are allowed on the roads only when they pass these checks," Ertl said. "It is not easy to get spare parts, but most collectors have their own small stock. Fortunately, Tatra cars are quite robust and they don't need too many spare parts. Most Tatra cars currently on the roads have several 100,000 kilometres on the tachometer, and some of them more than half a million. The main problem is corrosion."

Frost said due to the simplicity of its design, his Trabant was also rather easy to fix, and his club assisted in establishing connections for needed parts.

"I think the cars were designed for a very long life anyway, and they have always been very reparable," he said.

Fun facts on the Trabant and Tatra

Production of the East-German Trabant began in the mid 1950s and came to a halt in 1991, shortly after the fall of communism. The cars are constructed on a steel frame with the outer panels made of duraplast, a plastic resin (related to formica and bakelite) reinforced with cotton fabric. Contrary to popular belief, they are not made of papier-maché or cardboard. The Trabant's two cylinder, two stroke engine has five moving parts, gives good acceleration, and allows for average speeds. The engine is light enough to be changed by one person lifting it out, and in Trabant rallies in the former East Germany, it was common to carry a spare engine in the boot in case of breakdown.

The Tatra company started in 1850 when Ignác Sustala founded a factory producing buggies and carriages in a small Moravian village called Kopřivnice. In 1897, Tatra started production of the Président, the very first motorcar in central Europe. Tatra remains the oldest auto manufacturer still producing cars today, second only to Mercedes-Benz. On March 5, 1934, Tatra astonished the world introducing the world's first serial-produced aerodynamic car, the Tatra T77. The car featured an advanced aerodynamic body with a drag coefficient of 0.212 (a value far lower than that of modern production cars), a panoramic windscreen and a rear-placed air-cooled 3 litre V8-engine. The car was a favourite of communist officials in Czechoslovakia, modelling itself on the Russian-made Volga.

Compiled by Keith Miller from the Internet.