While almost two-thirds of Slovaks say they have experienced corruption in their dealings with the country's civil servants, only 44 bureaucrats were found guilty of 'corrupt practices' in 1999. This spectacular gap between public perception and actual convictions, according to Prime Minister Mikuláš Dzurinda, was the genesis of a National Programme to Fight Corruption announced on February 27.
"Corruption is an attack on the very roots of our legal system, leading to a weakening of public confidence in the law and justice," said Dzurinda in a speech to the students of the Slovak Police Academy in Bratislava. "It lowers the overall moral tone in society, and causes great damage. Our goal is to build a Slovakia where you won't meet corruption." 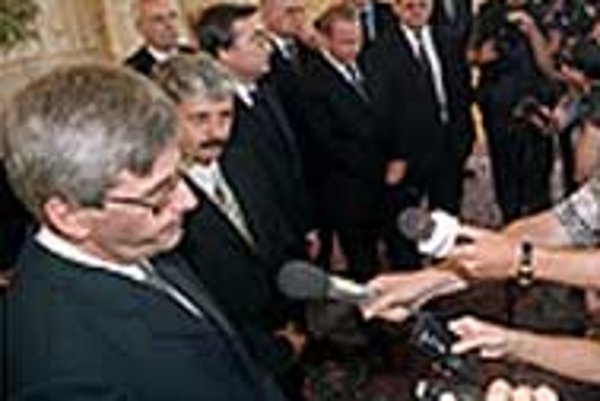 Font size:A-|A+  Comments disabled
While almost two-thirds of Slovaks say they have experienced corruption in their dealings with the country's civil servants, only 44 bureaucrats were found guilty of 'corrupt practices' in 1999. This spectacular gap between public perception and actual convictions, according to Prime Minister Mikuláš Dzurinda, was the genesis of a National Programme to Fight Corruption announced on February 27.

"Corruption is an attack on the very roots of our legal system, leading to a weakening of public confidence in the law and justice," said Dzurinda in a speech to the students of the Slovak Police Academy in Bratislava. "It lowers the overall moral tone in society, and causes great damage. Our goal is to build a Slovakia where you won't meet corruption."

Flanked by Deputy Prime Minister for Economy Ivan Mikloš, the main author of the programme, Dzurinda said he would allow 40 days of public discussion before producing a final, concrete plan to eliminate the main forms of corruption to be found in Slovakia: "bribery, widely defined abuses of power, misuses of public finances and favouritism of friends and relatives."

In its current and rather vague form, the anti-corruption programme includes three main ideas. The first is to eliminate positions in the state bureaucracy with "high corruption potential", such as officials who provide documents and licenses to the public. Secondly, the plan will increase the maximum jail terms faced by corrupt officials (giving or accepting bribes is now punishable by one to five years) and boost the efficiency of the police and courts (44 people were convicted of corruption in 1999, and only 14 in 1998). Finally, the government will increase public sensitivity towards the issue, and encourage citizens to report corrupt officials to police.

Corruption among public servants has been a recurrent theme among international observers since the Dzurinda government took power sixteen months ago. In October 1998, corruption watchdog Transparency International ranked Slovakia 53rd out of 99 countries on a 'corruption index', with a score of 3.7 points out of a maximum of 10. A survey condicted by the Wall Street Journal that year also ranked Slovakia as the most corrupt country in central Europe, largely on the basis of the privatisation practices of the previous Mečiar government.

Not that this negative perception has improved under Dzurinda; according to a survey conducted by the Focus agency in June 1999, 64% of the adult Slovak population claimed to have had a personal experience with corruption. Although combatting corruption was one of the main pillars of the Dzurinda government's 1998 programme statement, the country's Economy and Transport Ministers were forced to resign in 1999 after bungling a series of government tenders and being accused of wrongdoing.

Daniela Zemanovičová, director of the NGO Centre For Economic Development (CPHR), said the reason the initiative had taken so long to prepare was the virtual absence of public pressure for change and the reluctance of Slovak civil servants. "It was hard for them [the government] to find enough active support in the civil service to encourage such initiatives," she said. "We'll have to wait and see if the government will be able to make the changes needed to improve the situation."

Zemanovičová added that Transparency International Slovakia, which is administered by the CPHR, would organise anti-corruption discussion clubs and promotional activities, especially with young people. "The part [of the government plan] that touches NGOs the most is the educational programmes. But we will be watching the goverment's activities closely. It's a kind of a test to see if the reforms will really come, and if the steps outlined by Dzurinda will take concrete shape in the near future," Zemanovičová concluded.

Ján Tóth, a senior economic analyst with Dutch bank ING Barings, agreed that the government would have to produce concrete results in its fight against corruption if it hoped to change public attitudes. "If they want to gain public confidence, it would help if they kept the promise they gave in the past that they would investigate the property relations of some prominent Slovak citizens who gained major assets during the former Mečiar government," said Tóth.

For Tóth, ineffective police and poorly paid court employees were the most important problems to be fixed before corruption could be effectively fought. The dividends of a successful campaign, he said, might be huge, including a more standard business environment and an increase in foreign direct investment. Slovakia attracted only nine billion crowns ($212 million) in foreign investment the first 11 months of 1999, far below the $500 million that former Economy Minister Ľudovít Černák had called for at the beginning of the year.

"Corruption in Slovakia is a big issue in general," agreed Heinz Zemke, executive director of Juhocukor, Slovakia's biggest sugar producer. Though Zemke said he had never had a personal experience with corruption in Slovakia, he said that corrupt practices were creating "many problems" for Slovak and foreign business people. If the government was serious about improving the business environment in the country, Zemke said, it should try to make the process of licensing companies who want to come to Slovakia more transparent, as well as improve the clarity of public tenders.

In fact, only a small part of the anti-corruption programme in aimed directly at improving public tenders; much of it seeks to reduce the role of minor officials in administrative processes, and is addressed towards public perception and education.

Ladislav Petričko, president of the Slovak Chamber of Doctors, said the government plan did no go far enough in eliminating the basis of corruption in the health sector, perceived by 84% of respondents in a June 1999 survey to be "heavily corrupt." For Petričko, the government would have to change the constitution if it was really serious about wiping out the practice of bribing state-paid doctors for above-standard health care.

"Article 40 of the constitution guarantees free health care to Slovak citizens, but in fact health care is not free because people feel obliged to pay money to doctors when they want better treatment than is normally offered," said Petričko. "If the law allowed people to pay for better treatment, we would see an improvement in health care services and a reduction in corruption. But making changes to the constitution requires political will and courage. So far, no Slovak government has had this courage."