Juraj Lazový has his hands full. As the new General Secretary of the Bratislava Stock Exchange (BSE), Lazový has the job of rousing the BSE from its deep stupor. The official stock market index, the SAX, has fallen to an all time low this year, while on some days not a single trade occurs on the main floor. The BSE has also not been helped by the resignation of Lazový's predecessor, Marian Sásik, in a scandal over the release of blocked shares in steelmaker VSŽ for trading.
If the BSE has a future, Lazový sees it in the floating of shares in so-called 'strategic' companies - state-owned utilities and monopolies that the government has slated for privatisation. He also welcomes new legislation which is in the pipeline for this year, including a law which will establish independent supervision of financial markets. The Slovak Spectator met Lazový on March 1 to hear more about the BSE's prospects in the year 2000. 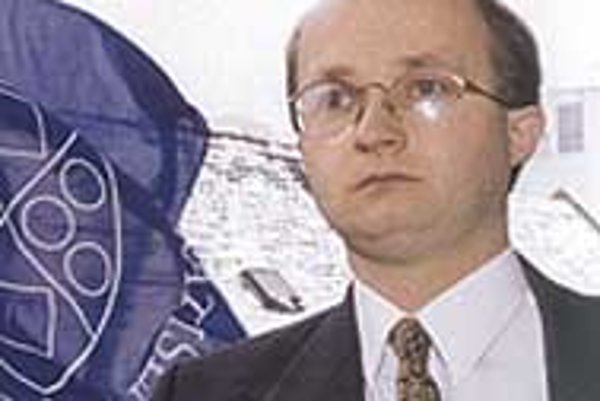 Font size:A-|A+  Comments disabled
Juraj Lazový has his hands full. As the new General Secretary of the Bratislava Stock Exchange (BSE), Lazový has the job of rousing the BSE from its deep stupor. The official stock market index, the SAX, has fallen to an all time low this year, while on some days not a single trade occurs on the main floor. The BSE has also not been helped by the resignation of Lazový's predecessor, Marian Sásik, in a scandal over the release of blocked shares in steelmaker VSŽ for trading.

If the BSE has a future, Lazový sees it in the floating of shares in so-called 'strategic' companies - state-owned utilities and monopolies that the government has slated for privatisation. He also welcomes new legislation which is in the pipeline for this year, including a law which will establish independent supervision of financial markets. The Slovak Spectator met Lazový on March 1 to hear more about the BSE's prospects in the year 2000.

The Slovak Spectator (TSS): What is the function of the Slovak capital market?

Juraj Lazový (JL): Compared to the banking sector, the capital market is a tool through which the best allocation of [financial] resources can be achieved. Capital markets around the world have been growing, and in some countries they have even outgrown the banking sector. In Slovakia, unfortunately, this has so far not been the case. We would be happy if the government decided to place some shares in Slovak strategic companies [utilities and state-owned monopolies the government intends to privatise - ed. note] on the capital market.

This could stop the current negative trend. However, this must go hand in hand with a change in legislation. Debt financing through the provision of loans and the issuing of bonds is not a typical feature of a healthy commercial environment. Companies need to obtain new capital and to increase the value of their shares though the capital market.

TSS: The capital market here got off to a strong start in 1993, but then investors turned off the BSE in 1995. Why?

JL: In 1995, coupon privatisation and trading with shares was still at its height. Ownership structures in privatised companies were being created. Unfortunately, when these structures were finally created, share trading declined, and today the share market isn't fulfilling its role - we don't really have portfolio and financial investors present on the capital market.

Stock exchange operations can be divided into two parts: trading with shares, which has not been going in the right direction, and trading with government bonds, which has been relatively successful.

TSS: How much of the failure of the capital market is due to past corruption?

JL: The capital market, in general, thrives in countries where there is a transparent and effective economy. However, it is difficult to connect the level of corruption in the past with the failure of the capital market, because I think there is no proof of this. Neither method of privatisation [coupon and national property bonds] was successful, especially the bond issue. In general, I can conclude that corruption doesn't help the capital market at all.

TSS: Would investigations of past economic crimes and charges against people who privatised illegally help the capital market regain its reputation?

JL: I don't think this would help directly because it would be more a political than an economic decision. What would help, however, is if economic relations were clarified and if companies were run more efficiently and transparently to avoid the stripping of assets. People who try to strip assets don't need the capital market because the capital market reveals such attempts very quickly.

This means that if a company isn't transparent, then it doesn't have a chance to compete in the capital market. There must be an overall effort to protect the capital market from the presence of unhealthy companies.

TSS: Do you feel that this effort is being made in Slovakia?

JL: This country wants to become a part of the EU, which means that Slovakia has to respect the values of EU members.

TSS: How much did the scandal surrounding your predecessor, Marian Sásik, hurt the image of the BSE?

TSS: What kind of co-operation does the stock exchange have with the Slovak government?

JL: Our co-operation is quite good, although we don't share the same opinion on certain issues.

TSS: You have said that the capital market would benefit enormously from the trading of shares in strategic companies. However, the Slovak government seems to have a different idea, and Privatisation Minister Mária Machová has said it would be better if shares in these companies were traded abroad. Is this difference of opinion reconcilable?

JL: We opened a debate [between the BSE and the government] on the privatisation of strategic companies on February 28. No final verdict has been reached so far, so there's still time for discussion. Deputy Prime Minister for Economy Ivan Mikloš, for example, supports the idea that majority stakes in strategic companies should be sold to foreign strategic investors, while minority stakes should be traded on the capital market.

As far as the statement of Minister Machová is concerned, I'm sure that there must be a misunderstanding. I simply cannot imagine that shares in strategic companies would be traded abroad and not in Slovakia. Which foreign stock exchange would be willing to guarantee the quality of these shares?

We are interested in meeting government officials and try to explain to them what the most appropriate solution for both the government and the capital market would be. I think we can work out our differences.

TSS: But on this issue at least, it looks as if the government is on a different page, especially in light of the most recent proposal to sell 15% in Slovenské Telekomunikácie to the European Bank for Reconstruction and Development, which is far from a portfolio investor...

JL: In this case you're right. Government officials should have in mind higher goals, such as the overall economic situation in the country. It's actually very simple - countries where the capital market doesn't work properly have inefficient and untransparent economies. So the government shouldn't view the sale of its strategic companies as simply a good opportunity to get rid of them - they should do it with a true desire to help this country.

TSS: If shares in strategic companies are not floated on the BSE, is the capital market lost?

JL: We can offer foreign securities to our Slovak members, which can help a bit. Apart from that, the Finance Ministry trades its bonds on the secondary market, and this is now the core activity that keeps the stock exchange running. It's fine that we have this trading, but again, the stock exchange should trade mainly shares.

TSS: The market capitalisation of the Warsaw Stock Exchange is 30 times higher than here in Bratislava, while in the Czech Republic and Hungary it is about 12 to 14 times higher. Is this difference due to the fact that these countries have floated shares in their 'strategic companies' on the capital market?

JL: I have to agree with this. If the expected amount of shares in Slovak strategic companies gets on the capital market, it's capitalisation would be several times higher than it is now and could be at least close to the market capitalisation of the aforementioned stock exchanges.

TSS: Recently we have heard rumours about the creation of a central European stock market, which Slovakia could become a part of. What do you think of this notion?

JL: The Vienna and Frankfurt stock exchanges are creating a new exchange, called New Ex. They want to trade blue chips from stock exchanges in Prague, Warsaw, Budapest, Bratislava, Ljublana and Moscow. It's difficult to say whether or not it will be successful, but while this initiative will be our competition, it won't replace us.

I think that we have better contacts with companies that have been traded in this region.

TSS: What laws has the government approved over the last 15 months to support the dying capital market?

JL: The government approved a Bond Law, which means the process of issuing bonds will now be less complicated. The Law on Collective Investments, which went into effect January 1, is also good. It adjusts the conditions of collective investment in order to guarantee the protection of small shareholders in collective investment schemes [mutual funds, etc.].

Before, they [small investors] often didn't know what was happening with their shares, because they were accumulated collectively. Finally, the Securities Law has been revised to stipulate when dividends must be paid and to clarify some aspects of when general shareholder meetings must be called. The law also partially prevents asset stripping at companies.

However, the really key legislation is still in the process of preparation. The new Law on Supervision of Financial Markets [which will create an independent board to watch over financial markets] should improve the transparency of the capital market.

The board will also oversee insurance companies, a practice which has been very common and effective in western countries. This law should go into effect on July 1.

TSS: Some analysts say that if pension funds are allowed to invest into securities, that would increase the liquidity of the market. When will this happen?

JL: I think that before this happens, the pension system will have to be reformed, which will be quite difficult given the current situation of pension funds in Slovakia. The time-frame for this is from three to five years, so we can't expect it to help the capital market anytime soon. In the short term, this can help in the development of collective investment.