Slovakia on February 15 opened official entry negotiations with the European Union, thus joining five other new applicant countries on an "express train" towards the EU, in the words of Foreign Minister Eduard Kukan. According to Kukan, the Slovak 'train' should pull in to Brussels at the beginning of the year 2004.
"We have very ambitious goals in Slovakia's integration into the European Union," said Kukan at a February 14 press conference in Bratislava. "We have set our 'reference day' for joining the EU as January 1, 2004. On that day, the Slovak language should become another official language of the EU." 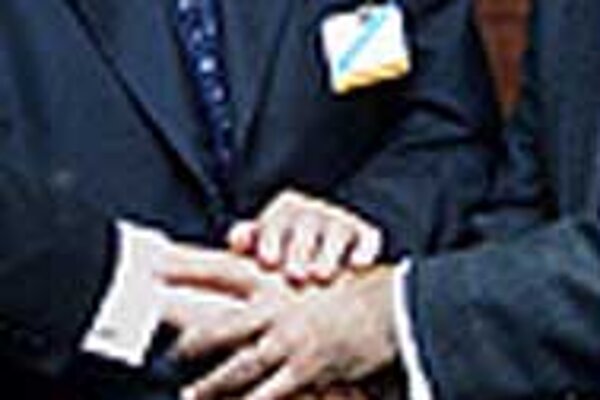 Font size:A-|A+  Comments disabled
Slovakia on February 15 opened official entry negotiations with the European Union, thus joining five other new applicant countries on an "express train" towards the EU, in the words of Foreign Minister Eduard Kukan. According to Kukan, the Slovak 'train' should pull in to Brussels at the beginning of the year 2004.

"We have very ambitious goals in Slovakia's integration into the European Union," said Kukan at a February 14 press conference in Bratislava. "We have set our 'reference day' for joining the EU as January 1, 2004. On that day, the Slovak language should become another official language of the EU."

Slovakia has been chafing to move quickly through the fine print of entry negotiation - an 80,000 page document of EU rules and standards that have to be approved by each candidate country, known as the acquis communautaire. The document is divided into 31 'chapters', each of which corresponds to a different economic, social or political sphere; countries will not be approved for EU entry until they have fulfilled the requirements of each chapter.

At the February 15 EU Accession Conference in Brussels, Slovakia was joined by five other EU aspirants who had been invited to attend at a summit last December in Helsinki: Bulgaria, Lithuania, Latvia, Rumania and Malta.

The five countries joined six regional neighbours with whom entry talks have already begun: the Czech Republic, Poland, Hungary, Estonia, Slovenia and Cyprus. The EU has said that all 12 nations will move at their own speeds through the application process, a doctrine which has become known as the 'regatta' principle.

According to a Slovak diplomat in Brussels, some EU officials have already divided the six new candidates into three subgroups. "Malta and Latvia are considered the best aspirants, followed by Slovakia and Lithuania in the middle and Bulgaria and Rumania bringing up the rear," the diplomat said.

The EU will make a statement about the readiness of each new country to begin entry negotiations when it publishes the list of chapters to be opened with each nation on March 8. Actual negotiations will start on March 28.

While Slovak diplomats say opening 13 chapters this year will stretch their abilities to the limit, they insist the task is doable. The 11 Foreign Ministry diplomats currently stationed in Brussels will be bolstered by another eight officials from the country's various ministries (the Education Ministry representative has already arrived).

Politicians, too, say that parliament is prepared to handle the blizzard of new legislation that fulfilling the acquis communautaire will require. František Šebej, chairman of the Parliamentary European Integration Committee, said that "if the ministries produce bills on time and adhere to their own legislative plans, parliament can handle the extra work caused by the integration process."

On February 16, parliament approved a motion of support for the Slovak government's approach to integration by a margin of 107 to 4, meaning that support came from both government and opposition camps. "I appreciate that all parliamentarians want to work for our integration with no regard to their political colours," said Deputy Prime Minister for Integration Pavol Hamžík after the debate.

But one foreign policy analyst said he was not convinced that 2004 was a realistic date for Slovakia to enter the EU, no matter how smoothly parliament worked or how dedicated the country's diplomatic corps. "To some extent, this deadline is out of the hands of candidate countries, and depends also on internal structural reforms within the EU," said Vladimír Bilčík, an analyst with Slovak Foreign Policy Association. "I think a more realistic entry date lies somewhere between 2005 and 2010."

Even the ebullient Kukan admits the hard work will not cease in 2004. Slovakia will need to go through a "transition period", he said, until Slovak economic and social realities catch up with its new EU-style laws. "The length of these transition periods will be determined by the efficiency of our economy, and will be a matter of discusson with the EU," Kukan said. Possible trouble spots, he continued, might be internal markets, agriculture, environment, energy and regional development.

The same doubts were voiced by European Comission chief Romano Prodi and his Integration Comissioner Gunter Verheugen, who visited Slovakia on January 20 this year. "I can't say when Slovakia might join the EU, but I don't see closing more than 7 to 10 chapters this year as very realistic," Verheugen said.

Slovakia's Kukan also expressed fears that Austria, especially under its controversial new government, would try to slow down the EU expansion process, fearing a wave of cheap labour from new EU countries like Slovakia and the Czech Republic.

But a meeting with Austrian Foreign Affairs Minister Benita Ferrero-Waldner on February 15 in Brussels eased these fears. "She [Ferrero-Waldner] assured me that Austria wouldn't change its approach to the enlargement of the EU," Kukan said for the Sme daily paper on February 16.

Bilčík agreed that Austria was not likely to affect the speed at which Slovakia's 'train' moved towards Brussels. "In the past, France for instance was a staunch opponent of the 1986 EU enlargement to Spain and Portugal, its southern neighbors. However, political compromises and transition periods for implementation of certain policies were devised to satisfy the French concerns. A similar arrangement is expected to take place this time around. After all, Austria does have perhaps some of the strongest economic and commercial interests in enlarging the Union to the east."