Walking through the empty halls of the only shipyard in Slovakia, Slovenské Lodenice Komárno, and seeing the dust slowly build up on tools and ship platforms, is a painful experience for the company's boss. "Listen to this silence! We still can't get used to it," says Milan Kopčok, general manager of the shipyard.
Back in his office, which is crowded with marine memorabilia and proud reminders of the forrmer success of the shipyard, Kopčok discloses the current problems of the company with difficulty. "Even an injured animal licks its wounds in the forest where nobody can see it, and then goes to the fields healthy," he said, lighting his first of many cigarettes. 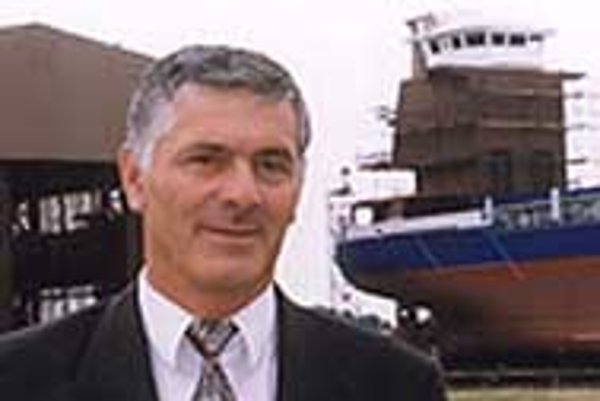 Font size:A-|A+  Comments disabled
Walking through the empty halls of the only shipyard in Slovakia, Slovenské Lodenice Komárno, and seeing the dust slowly build up on tools and ship platforms, is a painful experience for the company's boss. "Listen to this silence! We still can't get used to it," says Milan Kopčok, general manager of the shipyard.

Back in his office, which is crowded with marine memorabilia and proud reminders of the forrmer success of the shipyard, Kopčok discloses the current problems of the company with difficulty. "Even an injured animal licks its wounds in the forest where nobody can see it, and then goes to the fields healthy," he said, lighting his first of many cigarettes.

Kopčok has reason to get choked up. Business was booming in the late 1990's, but now, thanks to the Kosovo war in the spring of 1999, activities have screeched to a halt. In 1997, the ship-builder had total revenues of 3.2 billion Slovak crowns ($78 million), a figure which surged to 4.3 billion crowns ($102 million) in 1998 but slumped in 1999 to 2.7 billion crowns ($66.5 million). The 1999 business plan called for the construction and delivery of 14 ships. Slovenské Lodenice delivered only two.

The blow fell just as the company was about to celebrate its 100 year anniversary in April last year. Bombs dropped by NATO warplanes on targets in Serbia destroyed several major bridges over the Danube River; debris from the bridges has clogged passage down the river to the Black Sea ever since and made it impossible for SLK to deliver finished ships downstream to their German and Dutch customers.

Kopček said that the company had had to reduce its 1999 revenue projections by 70%. Costs were belatedly cut in October, when 900 workers were laid off out of 2,700 at the company.

To make ends meet, the company has tried to drum up business reconstructing 10 river and four sea-going passenger vessels since October. But reconstruction of old ships is only a temporary solution, according to Kopček.

SLK officials have demanded compensation for the losses incurred by the Kosovo crisis, and have passed on a bill to the Slovak Ministry of Economy which was then to log a request for remuneration with the European Union. The EU promised last year to compensate losses suffered by companies hurt by the war, and the concrete results of this promise were expected after a EU meeting in the Macedonian capital Skopje on February 10 and 11.

"The decision on compensation will be made by the EU in one week," said Economy Ministry spokesman Peter Benčúrik. "We expect losses to be compensated this year, but unfortunately nothing else has been decided yet."

Lodenice officials, for their part, were pessimistic about their chances of receiving a single euro from the EU, and put their hopes in getting a loan from the Slovak trade support bank Exim Banka.

The company's losses have hit the town of Komárno and the entire region hard. With no other big companies present in this part of sourthern Slovakia, the 900 people who lost their jobs have little chance too find new work. The only choice for many of them is to find work just across the river in Hungary. Some of those who haven't had luck in Hungary can be seen loitering around the shipyard waiting to be asked back to the company.

One of them is 28 year-old mechanic Zoltán Schlárt, who frequents a nearly empty pub in the centre of Komárno called 'The Little Horse'. The pub used to be where SLK workers met for a few cold beers before heading home. Since the company's troubles, the pub hasn't attracted either former employees or current shipyard workers.

With an unemployed wife and a child from a previous marriage, Schlárt was finding life difficult and was pinning all his hopes on returning to the shipyard. He said he didn't believe the Kosovo crisis was the only reason behind the company's deterioration. "I think management and the way it led the company would be worth investigating," he said.

Schlárt's pub musings may be closer to the truth than he realised. Equity analysts first wrote off the company in 1998, citing miniscule profits and poor stock market share value. The company's figures (see graph) show relatively stable sales but small and declining profits. Between 1997 and 1998, before the Kosovo crisis was more than a whisper at NATO headquarters, SLK's profits were on the way down from 38.1 million to 5.9 million crowns.

According to Miloš Božek, an analyst with J&T Securities, SLK was a typical Slovak company which has been trying to restructure itself since 1989. "They really hoped for restructuring and always came up with promising business plans, but never once hit them," he said. "That's why they lost the trust of potential foreign investors and stopped being traded on the market." Other capital market analysts had absolutely nothing to say about the company, explaining that it was not an interesting investment.

The profit decline, and the sudden disinterest in SLK stock, coincided with an investment programme at the shipyard. In 1998 the company built a resplendent new hotel, renovated its headquarters and bought new machinery. These investments were made in the 1998 election year, when it was well known that a currency devaluation would follow the autumn race.

Božek explained that the 1998 devaluation of the Slovak crown had forced many companies that rely on foreign currency transactions to make provisions which negatively influenced their final results.

But the 19% currency crash which followed the central bank's cancellation of the fixed exchange rate on October 1, 1998 found the shipyard with little protection. "SLK didn't have many reserves in that period of 1999, and the autumn [1998] currency devaluation caused us troubles," said SLK spokesperson Miroslav Bednár.

With few reserves, no new contracts and little likelihood of compensation, the SLK won't be able to depend on its shareholders to rescue it from its financial troubles. Lodenice's basic capital is just over 600 million Slovak crowns, while its main shareholders include the PSIPS investment fund (20,2%), currently under a caretaker administration by the Harvard investment fund, the troubled Slovak bank IRB (7.5%) and unknown investment funds like Park Real Dolný Kubín (19.6%), Danubia Invest ( 10.1%) and others including a shipping company in Cyprus with a 4.8% stake.