Except for an empty place on either side of 14-year-old Jožo H., the ring of 80 children sitting shoulder to shoulder is completely unbroken. At 12:30 on February 8 - his first day at the Children's Diagnostic Centre in Bratislava - Jožo sits alone, like he has so often in his young life.
At the age of three, Jožo's dead-beat dad deserted him and his alcoholic mother. Social workers from the western Slovak town of Trenčín soon intervened, and Jožo has been living in orphanages and children's homes ever since.
Jožo will spend three months at the centre for running away from his Trenčín children's home and turning up days later drunk at a Bratislava disco. At the centre's daily 'community' group meeting, his sad eyes are lowered as he introduces himself to the group. 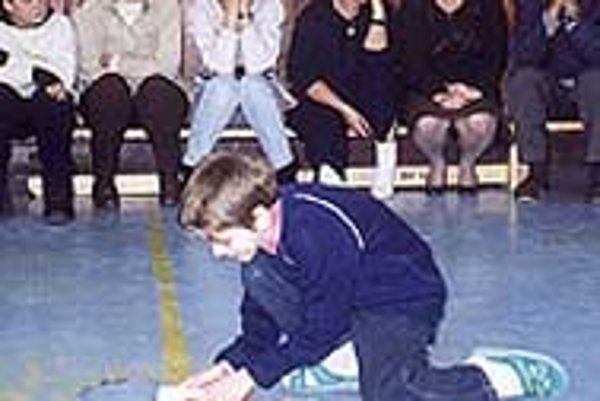 Font size:A-|A+  Comments disabled
Except for an empty place on either side of 14-year-old Jožo H., the ring of 80 children sitting shoulder to shoulder is completely unbroken. At 12:30 on February 8 - his first day at the Children's Diagnostic Centre in Bratislava - Jožo sits alone, like he has so often in his young life.

At the age of three, Jožo's dead-beat dad deserted him and his alcoholic mother. Social workers from the western Slovak town of Trenčín soon intervened, and Jožo has been living in orphanages and children's homes ever since.

Jožo will spend three months at the centre for running away from his Trenčín children's home and turning up days later drunk at a Bratislava disco. At the centre's daily 'community' group meeting, his sad eyes are lowered as he introduces himself to the group.

The Diagnostic Centre is not a typical children's home. It's where kids are sent when nobody else will take them, when orphanages cannot handle their behavioural problems, when they have been convicted of violent crimes, or when their parents are too deep into drugs and alcohol to care for them. The centre evaluates the root of each child's problem and suggests a remedy after all other institutions have given up in defeat. For some, the centre will be their childhood home. For others, it is their last chance to shape up before being sent off to prison.

Although Jožo does not know the other children, they recognise him. They all come from the same broken homes and lead the same hard lives. A small girl, maybe six years old, jumps up from her bench and runs over to Jožo, placing a string necklace hung with a piece of candy around his neck. The girl shakes his hand and skitters away - Jožo blushes, and almost smiles.

Life in Slovakia has changed almost beyond recognition over the past 10 years. Gone are the days of zero unemployment and guaranteed accomodation under communism; in their place is a free market system replete with 20% unemployment and parents who often have to work two jobs to make ends meet.

Peter Guráň, a sociologist and director of the Social Affairs Ministry's Family Policy Section, said that one of the most damaging changes had been a breakdown in family guidance. Many parents have no time for their children now, he said, and are often simply not mature enough to start a family. The children suffer the most, frequently turning to drugs and other criminal activity.

"Over 50% of all Slovak women are pregnant on their wedding days," Guráň said. "Social forces here in Slovakia say women cannot be single moms, so they are pressured into marriage and 10 years later are often divorced."

Slovak women also marry at a younger age than in any other European country. According to data provided by the IVO think tank in Bratislava, the average Slovak woman marries at 21.6 years and has had her first child by age 22.1.

Not only are Slovakia's young mothers not prepared to nurture their children, but they are also ill-equipped to deal with the economic stresses that are a party of daily life in the country. "The worse the economy is, the higher the likelihood that children will have behavioural problems," Guráň said. "When the parents are poor, they are stressed and they have no money to support their children's interests and develop healthy habits."

At the Diagnostic Centre, 'community' meetings take place every day at 12:30 and are designed to install a sense of confidence and discipline in children lacking either or both. "The meetings are a ritual to create a structure in the children's lives and to encourage communication," said the centre's School Director Ľubica Murínová.

"When some of these children come to the centre they don't know how to say hello or ask politely for something," Murínová continued. "Before they came here, these kids got in trouble when they had free time. Here we have to give them a structure so they have no free time and they can learn how to spend their time constructively."

The meeting is lead by centre director Albín Škoviera, who begins each community by leading the group with his acoustic guitar in singing a song by the Slovak pop group Elán called Vymyslená ('Imaginary'). Introductions of newcomers follow.

Most of the meeting is devoted to the appropriately titled "miscellaneous" time, during which the kids are welcome to voice compliments, complaints, apologies or requests. All speakers are expected to stand, as are all children being praised or reprimanded. This teaches them to take full responsibility for all their actions, good and bad. "Some psychologists may criticise us for this practice," said Murínová. "But if we don't make them stand up, they will remain anonymous."

Taking responsibility is a theme that struck a chord with 15-year-old Martin H. A resident of the Bratislava suburb of Petržalka, Martin's parents sent him to the centre after he skipped school for a month and allowed his drug-addicted friends to use his empty flat to inject heroin. Martin's mom had been away for the month at a health clinic, and his father worked long days.

Short-haired Martin is imposingly big, and the scowl he wears suggests a mean streak. But under the menacing exterior, Martin is soft-spoken, thoughtful and remorseful. Above all, he is determined to accept responsibility.

"I have a normal family, it's not my parents fault," he said. "I had some friends who pressured me. They asked, 'Why do you go to school? What can they teach you there?' Also, I'm not very good at school, and I think that sometimes the teachers focus only on the good students. But it's my fault. I just didn't want to go to school."

Martin says he eventually would like to go home, but wants first to take advantage of his time at the Diagnostic Centre. Like all the children, he is taking school lessons and receives a daily evaluation from his teachers. Martin wants to be a Mercedes-Benz mechanic one day - to do so, he must first get back into school.

"I like the teachers here, they explain things better," he said. "I want to stay as long as possible so I can get good evaluations and become a mechanic. But I miss my family. I only get to see them once a week and it's not enough."

The Diagnostic Centre's Škoviera said that even if children like Martin do make a successful transition back to family life, changing social conditions will make the task of growing up a constant struggle. "Society worships money now," he said. "People don't ask how you get money, only if you have money. There is a lack of emotional support from parents, and this has made our children more aggressive."

His claim is supported by a series of recent youth crimes which have grabbed Slovak headlines. In December, a boy from the northern Slovak city of Poprad was kidnapped by his two teenaged neighbours, one of whom was his cousin, and was then left half-frozen and unconscious in a road-side ditch when the boys' attempts to extol a $20,000 ransom were foiled. In January, two teenagers in the central Slovak town of Partizánske beat two local men to death by the Nitra River with wooden bats, then stole a little over 1,000 crowns ($23) from the corpses.

While the recent cases had shocked society, the Family Ministry's Guráň said they were not part of an overall increase in youth crime. Such crimes have always existed, he said, but under communism news of the more gruesome events was simply repressed.

Physician Ľubomír Okruhlica agrees that violent crime is not the biggest problem facing Slovak youth. A doctor at the Children's Centre for Drug Dependency in the Bratislava district of Petržalka, Okruhlica said that drug abuse was a far greater hazard, starting as it does at a young age with Slovaks.

"The average age for a drug addict in Slovakia is 22," he said. "But the kids usually start experimenting between the ages of 12 and 14. They experiment with marijuana which leads to more serious drugs. We now have a huge heroin epidemic mainly among our youth."

Worse yet for the kids, Okruhlica said, was that the country's lack of employment opportunities made it difficult for rehabilitated addicts to lead purposeful lives and stay clean. "Due to the recent recession, we can't find jobs for the rehabilitated," he said. "If they can't get a job, it's tough to keep them drug-free. These are mostly unqualified kids with criminal records and it is hard for them to find someone who will give them a job."

At the end of each community meeting, the Diagnostic Centre holds a 'leaving ceremony' for children departing the group. Emotions run high - the employees become close with the children, most of whom don't want to leave the centre when their stay ends. For many of these kids, their time at the centre may very well turn out to be their fondest childhood memory.

For his part, Jožo says he wants out right now. He wants to finish his three months and go back to the Trenčín children's home to be with his girlfriend Martina.

On February 9, a leaving ceremony was being held for two other boys. They stood solemnly and accepted some last words of praise from Škoviera, who told them that they were ready to thrive in the world. When finished, he rose and crossed the room to shake hands with the boys and give them a parting hug. Almost every one of the other 80 children in the room did the same; the boys broke down and were unable to respond to any of the farewells through their jerking sobs.

Martina Pisárová
contributed to this article.