A recent exodus of English teachers from the Berlitz language school in Bratislava to cross-town rival Slov Pro has sparked a war of words over the work conditions, training and pay offered to native-speaker language teachers in Slovakia. While both schools claim to serve their employees well, teachers themselves say there are simply not enough language instructors around to fill the demand, and argue the shortage is turning competition between rival schools into a fight.
Having a stable base of native speakers can make the difference between a language school's keeping clients and attracting new business or losing contracts. 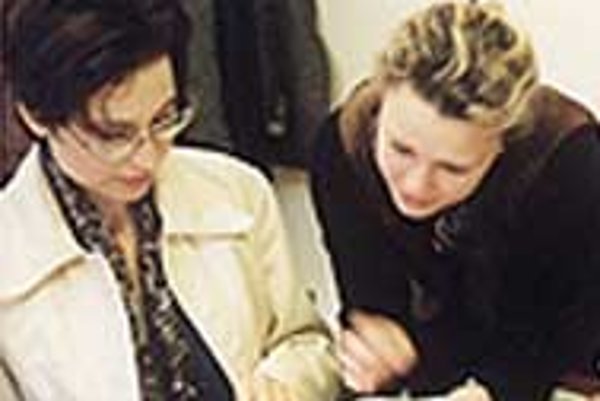 Font size:A-|A+  Comments disabled
A recent exodus of English teachers from the Berlitz language school in Bratislava to cross-town rival Slov Pro has sparked a war of words over the work conditions, training and pay offered to native-speaker language teachers in Slovakia. While both schools claim to serve their employees well, teachers themselves say there are simply not enough language instructors around to fill the demand, and argue the shortage is turning competition between rival schools into a fight.

Having a stable base of native speakers can make the difference between a language school's keeping clients and attracting new business or losing contracts. While two of the biggest private schools, the British Council and Akadémia Vzdelávania, work with agencies in Great Britain to bring in teachers, schools like Berlitz and Slov Pro rely mostly on the trickle of native speakers that land in Bratislava each year.

So when five English teachers left Berlitz over the past six months to go to the Slov Pro school, clients and other teachers took notice. Berlitz, which currently employs six native-English teachers, lost half its native staff, while Slov Pro brought their total to 11 native-speakers in Bratislava.

Teachers who have worked at Berlitz generally say they were first attracted to the company by its international name, the fact that no experience was required of instructors, and by the training offered. But those who left Berlitz for Slov Pro, a rival for corporate clients in the Bratislava language school market, said that their new school offered them a better deal than the one they were getting at Berlitz.

"The main problem I had at Berlitz was that there was no communication with the management," said Margaret Crawford, a Scottish teacher who left Berlitz for Slov Pro in November 1999 after working there for eight months. "I was working long hours for little money, and if I had a problem with something no one cared."

Berlitz director Denisa Baranovičová declined to comment directly on the departure of teachers to Slov Pro, but admitted that Berlitz had always had a difficult time finding and keeping teachers, especially good ones with a commitment to teaching.

The rivalry between Berlitz and Slov Pro stems from the fact that the founder and director of Slov Pro, American Andrew Miller, once worked for Berlitz in 1994-95. Miller, who worked as the local method trainer in Bratislava, departed because he became frustrated by the lack of support from Berlitz regional offices. "They [regional offices] wanted us to find good teachers but we couldn't keep them because they had us charging very high rates while paying the teachers very little," he said.

Miller started Slov Pro shortly after leaving Berlitz and said that he made it a priority to offer better pay and benefits to teachers as well as create a better working environment. "All Berlitz's teachers are leaving and coming here because we treat them like human beings," he said. "If they have a problem we always try to help."

Berlitz's Baranovičová said that her company was trying to create a good working environment for teachers. "In the future we plan to work more closely with teachers and install teacher-management work groups," she said.

At least one corporate client has also left Berlitz because of constant uncertainty over who would be teaching their classes. Columbex, an international computer hardware company with a branch in Bratislava, stopped using the language school in the summer of 1999 after becoming frustrated with the high teacher turnover. "We had too many teachers in a short period of time," said Martina Chudá, a member of the company's finance department. "There was always a different teacher coming and going. Also, the quality of the teaching and the method was extremely variable. It was hard to study when everyone was teaching in a different way."

Slov Pro offers native speakers 250-300 Slovak crowns per lesson taught and guarantees a minimum salary of 25,000 Slovak crowns a month for full-time employees as well as paid holidays. In comparison, Berlitz offers between 170-190 crowns a lesson but doesn't guarantee a minimum salary per month, instead tying salary to the number of lessons taught. Slov Pro offers other benefits to its teachers, such as a free mobile phone with a 500 crowns credit per month; Berlitz offers a free membership to a fitness centre and sauna.

But it's the working conditions at the two schools, rather than the benefits packages, which have made the deepest impression on teachers. Berlitz instructors have to be available to teach from eight in the morning until eight at night four days a week. Teachers aren't given their schedule for the following day until two o'clock in the afternoon.

This work schedule was a source of contention for some of the teachers who went to Slov Pro. "My salary has doubled, and I'm at work for half the hours," said Slov Pro's Crawford. "Plus, I know exactly when I'm going to be working everyday the next week."

Officials at Berlitz questioned Slov Pro's ability to meet their promises to teachers, and pointed out that Berlitz still paid teachers better than most language schools in Bratislava.

One teacher with experience at both schools said he prefered Berlitz. American Jaret Snyder, who started teaching in Berlitz last summer, left to go to Slov Pro in December but then decided to go back to Berlietz after "being pressured" to teach a lesson without being trained first. "At Berlitz they trained me for four days first, and then when I was not comfortable teaching the advanced classes they never tried to force me," she said.

Englishman Peter Blight, a former teacher at Slov Pro who has over 20 years experience teaching English, said that the high turnover rate and little or no training provided made him question the quality of teaching at either school. "A huge number of teachers [at Berlitz and Slov Pro] are unqualified transients," said Blight. "An Australian beach bum who finds himself in Bratislava for a couple of months can come here and get a job teaching English."

For their part, both Berlitz and Slov Pro said that in the future they would like to find teachers with better qualifications and more experience, but that at the moment there was a shortage of good teachers in this part of Europe.