No better choice than Dzurinda

Prime Minister Mikuláš Dzurinda has aged visibly during his 14 months in power. His once-long hair has been shorn and has greyed heavily. His eyes, which during the heady election campaign of 1998 seemed lit by ambition, are now ringed with exhaustion.
Dzurinda's weary mien tells an eloquent tale of the battles he has fought as prime minister. While succeeding in his goal of bringing Slovakia into the orbit of western alliances such as the European Union and NATO, he has been less effective on the domestic political front, and has been harshly criticised for his failure to bring order to the warring factions within his own party, the Slovak Democratic Coalition (SDK). 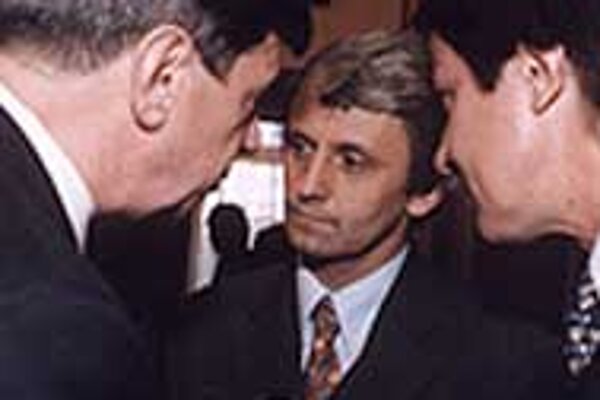 Font size:A-|A+  Comments disabled
Prime Minister Mikuláš Dzurinda has aged visibly during his 14 months in power. His once-long hair has been shorn and has greyed heavily. His eyes, which during the heady election campaign of 1998 seemed lit by ambition, are now ringed with exhaustion.

Dzurinda's weary mien tells an eloquent tale of the battles he has fought as prime minister. While succeeding in his goal of bringing Slovakia into the orbit of western alliances such as the European Union and NATO, he has been less effective on the domestic political front, and has been harshly criticised for his failure to bring order to the warring factions within his own party, the Slovak Democratic Coalition (SDK).

But even as the pivotal 1999 Helsinki Summit and its invitation to Slovakia to begin EU entry talks fades into the past, rumours that Dzurinda might be replaced by a firmer manager have died away. Political professionals still doubt that the prime minister has the authority to keep the government together for another three years, but they are beginning to admit that no better candidate is waiting in the wings.

"Dzurinda is the first Slovak prime minister who has the advantage of constitutional majority [two-thirds of parliament] support behind him," said Ľuboš Kubín, a political scientist from the Slovak Academy of Sciences. "This opened up the possibility for big positive changes in the country, but unfortunately he behaved more like a clerk during his first six months in the office."

A poll carried out in October, 1999 by the Institute for Public Opinion Research showed that many Slovak voters agreed with Kubin's analysis. In April, 1999 the prime minister still enjoyed 18.2% popular support, but following a series of scandals which forced the resignations of two staunch Dzurinda supporters, former Telecom Minister Gabriel Palacka and Economy Minister Ľudovít Černák, Dzurinda's popularity dropped to 13.7% in October.

At that point, several trusted media commentators began speculating on the likelihood of Dzurinda's being dropped from the leadership following the Helsinki summit. But two weeks into the new year, a quiet reassessment has been made.

"At the moment, Dzurinda is the only candidate who is acceptable to the entire ruling coalition," said Grigorij Mesežnikov, president of the Bratislava-based Institute of Public Affairs think-tank. "Despite the unfortunate decisions that were taken in various cases and the resulting drop in Dzurinda's popularity, his authority has not been challenged by any of his cabinet partners."

Mesežnikov explained that Dzurinda had been successful in restoring the rule of law to Slovakia and in steering the wide-spectrum coalition government through difficult economic reforms. "By Slovak standards, he enjoys wide authority," Mesežnikov said.

František Meliš, a long-time political commentator with the labour daily Práca, agreed that Dzurinda's non-descript political profile had made him irreplacable. "Only a political kamikaze from the political left could dream of replacing Dzurinda, while only politically naive observers could imagine he might be unseated by someone from the right wing," said Meliš.

Dzurinda himself seems to have taken little care to build political support within his own SDK party, and some observers said this omission might spell the prime minister's downfall. The SDK, which was formed as a coalition of five parties in 1998, is still debating its future existence, with a decision expected in late January. Dzurinda has cast his lot in with the SDK, a risky gamble if some members of the coalition decide to leave.

In an interview for the weekly Domino Fórum paper, prominent TV journalist Daniel Krajcer said he had been "disappointed" with Dzurinda's performance so far, and cited the strife that the prime minister had seemed to court within the SDK. "It was his useless fight with the Christian Democrat faction [within the SDK] and with the Democratic Party faction," Krajcer said. "These two should be his natural allies within the coalition, but instead he has looked for greater support from Jozef Migaš [the leader of another ruling coalition party, the socialist SDĽ]."

Kubín agreed that the prime minister had been taking dangerous chances in alienating his supporters in the coalition. "As prime minister, Dzurinda needs firm support, but it is a big question whether he himself realises this political necessity," Kubín said. "He wants to be a mediator of different interests in the coalition and he is playing this role fairly well. But on the other hand he is not giving tone to the government, and he systematically avoids commenting on key topics like economic packages, reform of the public sector or the recently signed Vatican Treaty. Dzurinda as a politician shows potential for the future, but he has to understand that it takes more decisiveness and political courage."

In public at least, the PM still enjoys the unqualified support of his cabinet. Deputy Prime Minister Pavol Hamžík, who is also chairman of the ruling coalition Party of Civic Reconciliation (SOP), called Dzurinda "the best possible for Slovakia," and added that it was "very positive that he is also accepted by our partners abroad."

But analysts like Kubín continue to speculate about who, if anyone, might replace Dzurinda in the cabinet. "If it had to be somebody who should be able to serve the interests of a wide coalition my pick would be [Foreign Minister] Eduard Kukan," said Kubín. "If the goal was to find somebody who would help the country speed up reforms to catch up with neighboring countries, it would be [Deputy Prime Minister for Economy] Ivan Mikloš. If things continue as they are, we will soon reach a crisis point in the prime minister's office. But it's in Dzurinda's hands."