Following its recent acquisition by Italy's IntesaBci, Všeobecná úverová banka (VÚB), Slovakia's second largest bank, has said it is poised to enter a new era in its history, and with it that of the Slovak banking sector.
President of VÚB, Ladislav Vaškovič, who has headed the bank since the current government began its term in October 1998 and who guided it through its privatisation, talked to The Slovak Spectator September 6 about the past, present and future of VÚB and Slovak banking. 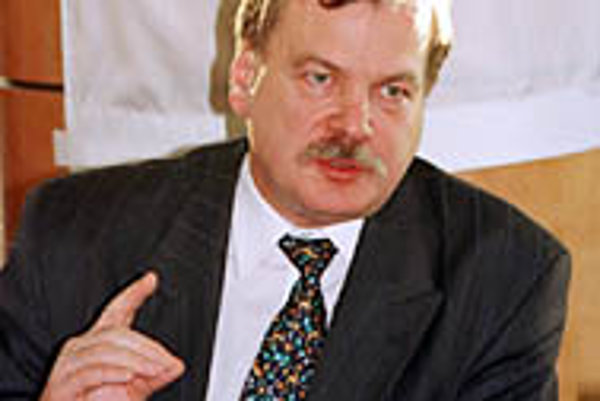 Font size:A-|A+0
Following its recent acquisition by Italy's IntesaBci, Všeobecná úverová banka (VÚB), Slovakia's second largest bank, has said it is poised to enter a new era in its history, and with it that of the Slovak banking sector.

President of VÚB, Ladislav Vaškovič, who has headed the bank since the current government began its term in October 1998 and who guided it through its privatisation, talked to The Slovak Spectator September 6 about the past, present and future of VÚB and Slovak banking.

The Slovak Spectator (TSS): There have been a number of important changes in the banking sector recently - the sale of Slovenská sporiteľňa last year, the sale of VÚB, the forthcoming sale of Investičná a rozvojová banka (IRB). What will these changes bring to the Slovak banking sector?

Ladislav Vaškovič (LV): The changes mean that the Slovak banking sector will be more or less healthy. After these privatisations we will no longer be able to speak about a lack of know-how of some managers in banks that we have seen over the last 10 years. The changes will also mean, possibly most importantly, that we will be ready to enter the European Union. I consider the privatisation of VÚB not just a step that will bring strength and know-how, but a step for partnership after entry to the European Union.

VÚB is a small bank in European terms - we are 126th on the ranking list of European banks, even though we are second in Slovakia. Once we are on the same market as 125 other banks, it will be very important that VÚB has a partner [IntesaBci] to give a guarantee of strength to the bank.

LV: Generally very good, especially with the Ministry of Finance.

TSS: Do you find that this government, in comparison with its predecessor, is more willing to move the banking sector forward, to be more open, and to be more western looking, to look for more foreign partners for banks?

LV: It was recognised as far back as 1995 and 1996 that Slovak banks had debts and that they had reached the limits of when they could try to act to resolve that situation. After this, though, it was clear that the situation could not be resolved without the help of the government and solutions began to be searched for. Restructuring was planned for all three of these banks [IRB, SLSP and VÚB]. But at that time those banks found that they could not solve their [financial] situations and that they could not fight under the legal framework of the time that was destroying the position of creditors.

TSS: Could you be more specific about the problems with the legal framework?

LV: Well, if you have to wait for court decisions for three, four or five years, you can imagine that in the kind of economic environment we had, you would have no chance of surviving.

TSS: Many organisations have said that there is still a problem in the financial sector and that the bankruptcy process is very long and drawn out. There has been a new bankruptcy law brought in, will that change the situation?

LV: The situation is improving, but slowly. That's a message not just from banks but also from entrepreneurs. It's clear from the point of view of banks that the new law will improve the situation, but there is still a long way to go. It is a question of stressing which areas we need to focus on. In my opinion we need to focus on improving the legal framework.

The situation in the banking sector, and you cannot even compare the situation now to even a few years ago - just look at figures such as much lower interest rates - suggests that on some level there has been improvement. But behind that there are questions about the legal framework, the relations between companies, and the culture [of business] in this nation.

LV: Enforcement of the law is the most important thing. It is not that the laws in this country are bad, they are more or less on the same level as in the Czech Republic, Poland or Hungary, but the difference is in enforcement of the law. You have to wait for rulings from courts for a very long time. I can't talk officially about any corruption, but...

TSS: Well, the World Bank has carried out its own surveys that show the Slovak courts are perceived as corrupt.

LV: I don't want to comment on that, but the question is, what are the main priorities of the government in connection to courts? The first is to make them independent, independent from the government, which has been done, so that's good. The second is to address the culture here, the way courts act and the way companies that are connected to courts also behave.

TSS: Speaking of legislation, at the end of this month a new draft of the Banking Act should be passed into law. How will that change the banking sector?

LV: You can see that some of the points in it were included as a result of the general public's view of banks. I can understand that some people feel that they are having to pay for the mistakes of the banks. But I don't see this 100 billion crowns [the value of the bad loans the current coalition transferred from IRB, VÚB and SLSP to Konsolidačná banka and Slovenská konsolidačná in preparation for their privatisations - ed. note] as a mistake of the banks' managements. These [bad] loans are a result of the change from a command economy in 1989 to a new system. It was a result of the change in the economy, not the fault of the banks.

TSS: But it would be fair to say that during the 1990s a lot of loans were extended on the basis of poor criteria.

LV: There was a lack of knowhow, and this goes back a long way. I can think about some projects that go back to 1991 and 1992. With the working environment in the bank I can understand why [this happened]. Just imagine, there were people who worked there who had been working in a socialist bank, they had no training in a market economy, and they started to work as a commercial bank. There was a lack of knowhow. I'm sure that they made a lot of mistakes. It was the same in the entrepreneurial sector. People thought, "I'll start a business, I'll become a manager".

TSS: Do you think that these bad loans that were granted were given just because of a lack of knowhow, or were they under pressure from politicians to...

LV: I wouldn't say politicians, it was more lobbyists. There are always lobbyists behind politicians, and I can't imagine that any politician just called a bank and said "give a loan to this or that company". There was always a lobbyist behind that politician.

TSS: So that situation did exist?

TSS: The Banking Act will give more powers to the central bank to do its job more effectively...

LV: This Banking Act is coming too late. From what we have seen with Devín banka [a bank which was put under forced administration August 24 - ed. note] we can see that this act has come too late, and also, everything depends not on the act, but on everyday dealings with banks. Everybody knew that Devín banka, even last year, had serious problems.

TSS: So why didn't the central bank do anything about this?

LV: There are many rumours circulating, but I wouldn't like to comment on them. But this bank was always in trouble.

TSS: Are you happy with the work the central bank is doing?

TSS: What do you see as the strategy of VÚB after its privatisation?

LV: It's clear that the future business of VÚB will be decided by its new shareholders. But it will be a combination of our knowledge of the local market and the knowledge and knowhow of IntesaBci. We will continue with a focus on lending to the corporate sector, but will also stay involved in retail banking.

TSS: All banks at the moment are cautious with their lending. In the future will lending policies become any looser?

LV: It's a question of the behaviour of our clients. For many years companies viewed VÚB as a good mother, someone that would always provide for them, and they didn't have to worry about their futures. But now our [lending] will be of the same standard as in other parts of IntesaBci.

TSS: There are a lot of smaller companies claiming they cannot get loans because lending policies are too strict. Would you agree?

LV: We have prepared a programme for lending to small and medium sized enterprises in cooperation with the European Bank for Reconstruction and Development. But the same problem remains: If a person has a good idea and wants to buy a company, but has absolutely no money, we cannot repeat the same mistakes that were made in 1991 and 1992. It's out of the question. This [business] environment has to be stabilised. Plus, we have to take into account that our legal framework is not standard.

TSS: Are you speaking again of proper enforcement of the law?