A shipment of 504 anti-tank missiles was seized at Bratislava airport September 29 as police squads foiled an apparent attempt to transport the arms from Iran to Angola.
Flight IL 76 from Tehran landed at 18:53 at the airport, unloaded cargo and then left for Copenhagen at 20:39. Airport authorities then seized the cargo after discovering the falsely declared goods when checking transport documents.
A plane from the Ukraine, arriving at 20:27 in Bratislava, was not allowed to collect the missiles, and flew on to its original destination, Ovda in Israel, the next day without its planned load. 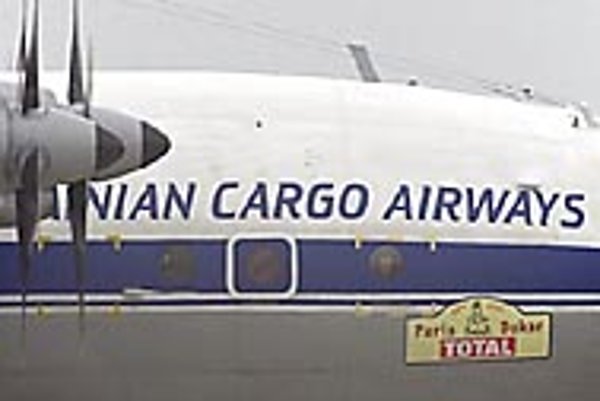 Font size:A-|A+  Comments disabled
A shipment of 504 anti-tank missiles was seized at Bratislava airport September 29 as police squads foiled an apparent attempt to transport the arms from Iran to Angola.

Flight IL 76 from Tehran landed at 18:53 at the airport, unloaded cargo and then left for Copenhagen at 20:39. Airport authorities then seized the cargo after discovering the falsely declared goods when checking transport documents.

A plane from the Ukraine, arriving at 20:27 in Bratislava, was not allowed to collect the missiles, and flew on to its original destination, Ovda in Israel, the next day without its planned load.

The Interior Ministry, having first denied earlier reports that the seized goods were mortar grenades, confirmed information from the Slovak Customs Directorate that the missiles were destined for Angola. The ministry added that no other details on the case would be given out until the investigation was completed.

The seizures came just days after cabinet amended several laws on the export and import of 'dual-use' goods. The changes are designed to restrict the issuance of licences for trading and transporting goods such as industrial chemicals, toxins and technologies used in nuclear power generation.

Some chemicals used extensively in agriculture, such as ammonium nitrate, can be used to make explosives. The import and export of ammonium nitrate from Russia and the Ukraine, for example, is forbidden under the new law.

The Bratislava airport seizure came also after weeks of media reports and subsequent denials from Slovak chemicals and industrial firms of trading with terrorist groups, including people connected to Osama bin Laden, the man Washington and many European leaders believe to be behind the September 11 terrorist attacks on New York and Washington.

On September 25, one day before submitting a confidential list to cabinet of Slovak firms and goods which may have been involved in trade to countries suspected of harbouring or helping terrorists, Economy Minister Ľubomír Harach admitted that until 1996 some goods had been traded from Slovakia to states with potential terrorist links.

"I have information that between 1995 and 1996 there were goods which were exported to countries that could have been used by individuals co-operating with people who commit terrorist actions" he said. He declined, however, to name the firms.

But while the new legislation deals with trade in goods that can be used in weapons manufacture, direct trade, including the Sk2.3 billion ($48.4 million) of arms trading carried out by the Slovak arms industry in the first six months of this year, has not been addressed. Other EU candidate countries have already moved to make weapons trading more transparent, thus making it safer, say some independent defence experts.

"The Slovak government should have dealt not just with trade in 'dual use' goods, but also in weapons. Parliament still has no direct control over arms exports - there's no public accountability," said Matúš Korba, a defence expert and Slovak rapporteur with the British-based weapons trade monitoring group Saferworld.

He added that even though the legislative changes were "an important initiative", more had to be done to ensure information on weapons trading was made public.

Eleven of the 15 EU member states produce annual reports on their arms trading. Slovakia, along with all other candidate EU states - including neighbouring Poland, the Czech Republic and Hungary - does not. "Slovakia should start producing this. Poland will start doing so next year, and there is a strong possibility that Romania and the Czech Republic will do the same," Korba said.

In 1998, as part of measures to monitor weapons sales more closely, the Economy, Interior, Foreign and Defence Ministries formed a special licence committee issuing individual licences for every transaction (import or export) of all military material.

In addition, every company was required to have a general licence to trade arms before it could apply for individual licences for specific contracts. If a company refused to disclose information on its dealings to the committee it could be fined up to Sk10 million ($212,000).

Despite new and existing legislation, Slovak authorities still face problems with gun-running for terrorists by organised crime groups across central Europe, poor monitoring of the closure of cold-war arms producers in the former Czechoslovakia, and low-paid officials turning a blind eye to dubious arms trades, say groups monitoring the trade in weapons.

"There are lots of second-hand weapons floating around eastern Europe, there are still factories producing arms because no-one has told them to stop, and the situation has always been controlled by the state - leaving a lot of room for corruption and bribery," said Paul Beaver of Jane's Information group, one of the foremost authorities on international defence and intelligence matters.

Since 1996 Slovakia has complied with a UN protocol on the trade of arms and 'dual use' goods to certain countries. However, Angola is not a country with which Slovakia is banned from trading weapons.

Slovakia has been touched by international arms trading scandals before. The Slovak firm OSOS was implicated by French sources earlier this year in supplying arms to Angola in deals mediated by Jean-Christophe Mitterand, son of the former French president.

In March, armoured vehicles produced by Slovak military hardware manufacturer DMD were exported to Germany for modifications. They were due to be returned directly to Slovakia, but instead reappeared some weeks later at an arms fair in Saudi Arabia.

During Nato raids on Serbia in 1999, a US stealth bomber was lost over Serb airspace. Serb media claimed that the plane was tracked and fired on using the Czechoslovak Tamara radar system.

Czech and Slovak authorities denied knowledge of any sales of the radar system to Serbia, but later admitted that much military hardware dating back to before 1989 could not be accounted for. Nevertheless, they maintain, the illegal trade in weapons is not a problem specific to Slovakia, a claim supported by independent analysts.

"While there are no uniform binding guidelines in the EU on the transparency of such trading, there is more openness in EU member states than in candidate EU states. But even EU member states are not free of scandals over illegal weapons shipments," said Vladimír Bilčík of the Slovak Foreign Policy Association.