They're big, they're brash and they say their future in Slovakia is bright.
With the exception of PricewaterhouseCoopers, the biggest advisory firms in Slovakia, including Arthur Andersen, Ernst&Young, Deloitte&Touche and KPMG, have all moved to new quarters within the last three years. Their staff numbers have swollen to more than 100, and they fight for every bid on what they call a small market with fierce competition.
The world's top five auditing and advisory firms say they are planning further increases and expansions in Slovakia, good news for the domestic labour pool. 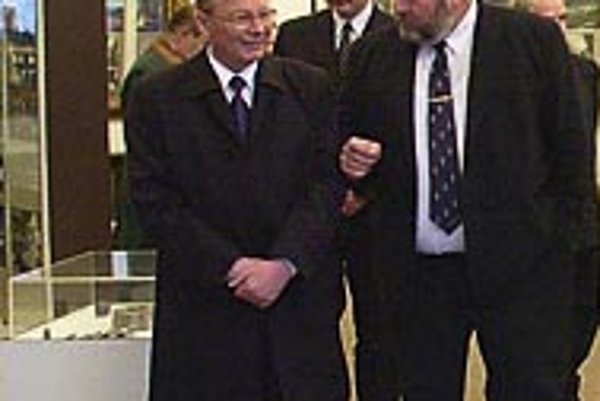 Font size:A-|A+  Comments disabled
They're big, they're brash and they say their future in Slovakia is bright.

With the exception of PricewaterhouseCoopers, the biggest advisory firms in Slovakia, including Arthur Andersen, Ernst&Young, Deloitte&Touche and KPMG, have all moved to new quarters within the last three years. Their staff numbers have swollen to more than 100, and they fight for every bid on what they call a small market with fierce competition.

The world's top five auditing and advisory firms say they are planning further increases and expansions in Slovakia, good news for the domestic labour pool.

As Slovakia enjoys an unprecedented economic transformation attracting foreign businesses to invest in its corporate and financial sectors, the 'Big Five' get lucrative contracts from a wide range of multinational businesses.

Based on their reputation and the guarantee they offer investors who know their services from back home, they have reached a dominant position on the market.

Their services vary from auditing, which makes up for more than 50% of their business, to tax and legal advice and all kinds of financial services. Among their clients are manufacturing firms, banks, insurance companies and other financial institutions.

Although Slovak privatisation, now in full swing, is offering the 'Big Five' great opportunities for revenue growth, the pace is expected to slow down with most of the country's state companies planned to be sold this or next year. However, all five companies say that even when foreign investment into state monoliths is accomplished, the new actors will continue to bring fresh water to their revenue mills.

"We will refocus our activities as the privatisation process ends, but investors will continue to need more sophisticated services," said Malcolm Best, managing partner at PricewaterhouseCoopers.

"We are driving our strategy towards increasing services to our existing clients rather than increasing client numbers - a more intensive form of cooperation," said Peter Feith, managing partner at Ernst & Young.

Between 10% and 25% of the total revenue for the 'Big Five' comes from their work on individual privatisation deals, mainly through due diligence procedures, which involve a thorough look at a company's balance sheet and an examination of its viability and potential for growth.

Even after demand for these kinds of services slows down, the 'Big Five' say, their help will still be required as the consolidation of the Slovak corporate sector gathers pace. Assistance will be needed in mergers and acquisitions, risk management, brown field investment and venture capital.

On the small Slovak market, only about 200 companies are big enough to be targeted as Big Five customers. But as foreign companies continue to buy into domestic firms, the five powerful players have an unrivalled chance to seal their place in the central European auditing and advisory sector.

"Foreign firms wouldn't enter this market without the assistance of the 'Big Five'. They need to have advisors who have global experience," Feith said.

At the beginning of the 1990s, domestic firms had 80% share on the domestic auditing market. But 10 years later the situation has reversed with the 'Big Five' holding a larger slice of the market.

While all say they are interested in supplying services to major Slovak corporate players, each firm has tried to develop its own area of specialisation.

KPMG stressed their desire to capture the medium-sized company market with firms such as metallurgical producer Železiarne Podbrezová and German tire maker Continental.

PriceWaterhouseCoopers on the contrary targets key utilities in the country such as the refinery Slovnaft, German car-maker Volkswagen Slovakia and pharmaceuticals producer Slovakofarma.

Deloitte&Touche has a broader scope of activities and focuses on the manufacturing and banking sector with clients such as American steel-maker US Steel, VÚB and SLSP banks and also medium-sized firms such as fibre producer Chemosvit.

Arthur Andersen says it is strong in banking and insurance with clients such as Tatra Banka and insurers Slovenská poisťovňa.

Ernst&Young says it is targeting Slovak institutions, such as the national railway ŽSR, and providing services to the Finance Ministry. It, too, has foreign clients such washing machines producer Whirlpool Slovakia.

In the end, however, all five admit it is difficult to distinguish between them. "There isn't any clear cut distinction between us. In terms of the potential and capacity of our services, there is no difference in the quality of what we provide," said Michele Lodi-Fe, managing partner at KPMG.

"We are all winning in our own way. I don't see any losers. We all have reasonably sized operations and we know the type of client we want," said Robert Wood, managing partner at Deloitte&Touche.

But with little differences in the quality services and the small size of the Slovak market, all five say the competition among them is tough and could slow growth.

"We are slowly replacing the Slovak firms, but five of us, not just me are knocking on the door of one company at the same time. I feel competition getting tougher and tougher," said Santiago Pardo, managing partner at Arthur Andersen Slovensko.

Some 'Big Five' representatives say the Slovak market still looks more closely at price than quality of services, adding that since there were not any major differences in the quality of services offered by the five firms, price had been considered the deciding factor for their customers. This has resulted in the cutting of prices - a phenomenon common to other central European countries.

"We can see cases of dumping, especially in auditing because there is a belief that when a company offers a lower price for auditing services, it can get other orders from the same client more easily," Lodi-Fe said.

However fierce the battle between the 'Big Five' becomes, analysts say that they are a good sign for Slovakia, bringing trustworthiness and a degree of international recognition to the economy.

"If a Slovak company is audited by any of the 'Big Five', it means that it has reached a certain standard and is reliable for international customers. It's a mark of quality," said Marek Jakoby, an analyst with Mesa 10 think tank.