In order to be considered for EU membership, one of the most important criteria Slovakia had to fulfil was the election of a president. The country had been without a president since March 1998 when Michal Kováč's term ended and then-Prime Minister Vladimír Mečiar assumed most presidential powers.
After parliament proved unable to agree on a new presidential candidate, the Dzurinda government passed two laws in January and March 1999 paving the way for direct elections. 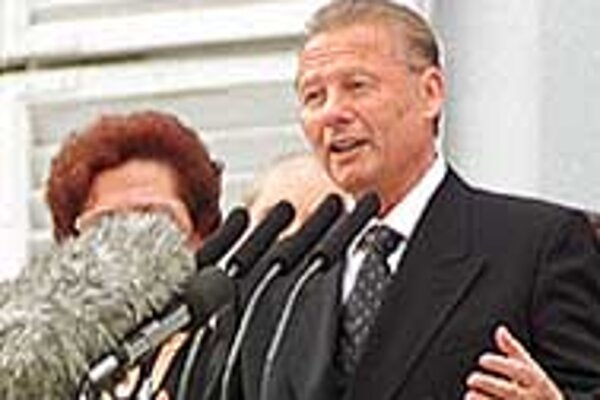 Font size:A-|A+  Comments disabled
In order to be considered for EU membership, one of the most important criteria Slovakia had to fulfil was the election of a president. The country had been without a president since March 1998 when Michal Kováč's term ended and then-Prime Minister Vladimír Mečiar assumed most presidential powers.

After parliament proved unable to agree on a new presidential candidate, the Dzurinda government passed two laws in January and March 1999 paving the way for direct elections.

SOP party boss Rudolf Schuster became the candidate officially endorsed by the government in the elections, which were scheduled for May 15. The nomination of Schuster, a former high-ranking communist official, caused friction within the government parties and public discontent that the direct election looked to be a foregone conclusion.

In the government's formal candidacy petition for Schuster on March 31, fully 28 of the 93 government MPs went against the coalition agreement and refused to support Schuster. Most of the objectors came from the KDH, DS and DU factions of the SDK party.

Schuster maintained that his past should not affect his chances. "My [communist] past is not my problem," he said. "It's their problem and they should solve it themselves."

Ten candidates vied for the presidential post, but the two main players were Schuster and Mečiar, who was a last-minute entry to the race on April 9. The first round of elections were held on May 15, with a second round slated for May 29 if none of the candidates secured the support of a majority of voters.

Schuster (47%) and Mečiar (37%) finished far ahead of the rest of the field in the first round. Former actress and ambassador Magda Vašáryová finished third with a dissapointing 6.6% - earlier polls had given her a 24% share.

Once the second ballots were counted, Schuster became the first directly elected president in Slovak history, defeating Mečiar by a margin of 57% to 43%. At his June 15 inauguration, Schuster pledged to be a "unifier" of the government and society as a whole.

"The tension existing between individual persons and social-political groups is turning into irreconcilable hatred which refuses any reasonable compromise," Schuster said. "The restoration of mutual trust between individuals, social communities, political subjects, the state and minorities are among the dominant tasks in the days and years to come."

Since taking office, Schuster has made his fair share of controversial decisions. He has fought an on-going battle with the Foreign Ministry over issues such as the recall of Mečiar-appointed ambassadors abroad. The ministry has been urging Schuster to recall the Slovak Ambassadors to Poland and Italy, so far to no avail.

Jozef Božek, the president's foreign policy advisor, said in November that the president had been considering the matter for two months, but had not yet acted because "the president is still evaluating the situation. It's not such an urgent issue."

For Foreign Minister Eduard Kukan, however, the matter is indeed urgent. Kukan said on October 26 that the ministry would like to recall eight or nine additional ambassadors over the next six months. Kukan may be out of luck, however, as each recall and new nominee must be approved by Schuster.

Michal Stasz, the president's spokesman, said that Schuster would not blindly follow the ministry's recommendations. "Schuster does not represent just government or just opposition foreign policy, but national foreign policy," he said.

Most recently, Schuster gave a surprisingly critical State of the Nation address in parliament on November 2. Taking his cue from rising unemployment and social distress, Schuster had tough words for what he referred to as the "political egosim" of the country's ruling parties.

"We've gone wrong somewhere," he said. "I don't see a sufficient quality of life in Slovakia. People don't need more promises, they need solutions." Schuster also used the forum to give credit to the HZDS for the party's contributions in moving the country closer to EU acceptance.

Government parties contested points made in the speech. Béla Bugár, the head of the Hungarian Coaliton Party (SMK), said that some of Schuster's statements had been hypocritical.

"I participated in negotiations during the formation of the current government," Bugár said (during the negotiations, Schuster's SOP party had reportedly lobbied hard to gain coalition backing for Schuster's presidential candidacy). "If I were in Mr. President's shoes, I would not have talked about 'egotism' of parties because the SOP itself fought for certain interests."