Chastened by a recent political funding scandal involving the ruling coalition Christian Democrats, government parties have promised to mend their ways and begin work immediately on an amendment to the Law on Financing of Political Parties.
The party financing bill is being prepared by Peter Kresák, a constitutional law expert and a member of parliament for the ruling Party of Civic Understanding. Kresák said on December 8 that the new law would force parties to divulge all of their financial sources, and would likely empower an independent body to levy fines on any party which broke the rules. 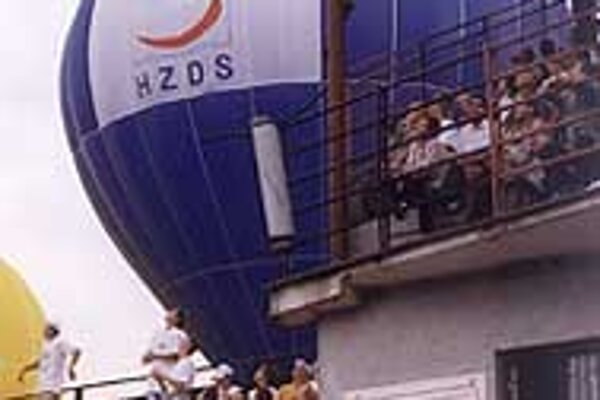 Font size:A-|A+  Comments disabled
Chastened by a recent political funding scandal involving the ruling coalition Christian Democrats, government parties have promised to mend their ways and begin work immediately on an amendment to the Law on Financing of Political Parties.

The party financing bill is being prepared by Peter Kresák, a constitutional law expert and a member of parliament for the ruling Party of Civic Understanding. Kresák said on December 8 that the new law would force parties to divulge all of their financial sources, and would likely empower an independent body to levy fines on any party which broke the rules.

"As a lawyer, I don't care whether it [the amendment] pleases political parties or not," said Kresák. "I will be counting on support from the public and the media. I know that right now, all parties are declaring they are behind the changes, but I am a realist, and I believe that this is being done under pressure from the media."

The 1991 party financing law, which sets a 12 million Slovak crown ($290,000) spending limit on the election campaign of each party, was largely ignored during last year's parliamentary elections. However, when the private TV Markíza broadcast a report on November 28 claiming that 67 officials from the ruling Christian Democrats were on the payroll of a tiny weekly magazine named Fakty, pressure to re-write the law rose several notches.

According to Kresák, the fact that Christian Democrat politicians were in the pay of Fakty owner TV Com (and its boss Peter Gabura) was more unethical than illegal. Far more troublesome, he said, were the hints of clientelism: the fact that TV Com in 1996 had received 30 million crowns from the German company Siemens, which had in turn won a two billion crown contract for the renovation of Bratislava's street lighting system from the Christian Democrat-dominated Bratislava City Council.

In amending the financing law, Kresák said, legislators will be trying to set realistic campaign spending limits, increase the amount of money parties get from the state budget, and force parties to disclose the identities of donors - removing both the temptation and the means for politicians to raise money through illegal channels.

In the aftermath of the Christian Democrat scandal, there was no shortage of politicians and analysts ready to point out the defects in current party financing legislation.

Political professionals agreed that the 1991 law did not meet the current funding needs of the country's political parties. Roman Kováč, chairman of the parliamentary caucus of the Slovak Democratic Coalition, the strongest government party, said that Slovakia had simply outgrown its 1991 financing law. "Many things have changed since then, for example inflation," he said. "The sums that were sufficient then are not enough any more."

According to the law, parties which take more than 3% of the popular vote in a national election receive 60 crowns ($1.45) from the state budget for every vote they win. This money is spread out over four years. For a party like the opposition HZDS, which won the 1998 elections with 907,103 votes, this provision gives them just over 54 million crowns, or about 14 million crowns a year.

"Experts calculate that a party like the HZDS or the Slovak Democratic Coalition needs about 40 million crowns a year to operate its central and regional organs and pay its employees," said Grigorij Mesežnikov, president of the Institute for Public Affairs (IVO), a Bratislava think tank. "As you can see, the money they get from the state budget just isn't enough, meaning they have to look for funding from private sources."

It is in hunting for these 'private sources' that parties most frequently get into trouble. There are no rules setting out the exact conditions under which financial gifts can be given, nor are foreign or anonymous donors prevented from making contributions. Instead, the law simply says that gifts may be given to political parties by 'physical and legal persons' and that parties must publish the details of every gift over 10,000 crowns; no single gift may exceed 50,000 crowns.

According to critics of the existing legislation, another problem lies in the fact that no control organ exists for requiring and inspecting financial statements from parties, nor is there any mechanism for publishing the contents of financial statements. Parties are currently required simply to provide parliament with an annual financial statement, which is neither verified nor published.

Kresák added that the new draft, which he had been working on for "about four or five months," would require parties to publish the names of every person or firm which donated money to them, and would also likely make the independent Supreme Control Office (NKÚ) responsible for checking financial statements and punishing infractions.

The SDK's Kováč confirmed that a working group of ruling coalition representatives would begin drafting an amendment "during the next week," and that a financing law should be ready for submission to parliament during the first quarter of next year.

Judging from the reactions of members of other government parties, the financing amendment should have more than enough support to pass.

"I've been behind such an amendment for about three quarters of a year, ever since other European countries like Germany began having problems with party financing," said Ľubomír Andrassy, vice-chairman of the ruling coalition Party of the Democratic Left. "That's why I'm glad most parties now support a new law. If we want to improve the quality of political parties, and of democracy in this country, we have to create suitable financial conditions for politicians to do their work."

Among opposition representatives, however, support was less open for a change in the law.

HZDS MP Ivan Gašparovič, the former Speaker of Parliament, disagreed that the financing law needed an overhaul. "This isn't a question of a poor law, but of the behaviour of individual parties," he said. "It's a question of the moral level of representatives of political parties if they want to obey the law or not, and it's also not just a problem in Slovakia, but all around the world."