The Košice hockey franchise has suffered through many losing seasons. But after being crowned Slovak ExtraLiga Champions last year, it looked like success in the country's big league had been secured for years to come.
A glimpse at this year's standings after 27 matches, however, tells another story. In one of the most remarkable collapses in Slovak hockey history, last season's champs are now dead last with only three victories and 11 points.
How did it happen? How did the best team in the league suddenly find itself outscored 61 to 127? For the answer we have to go back to 1996. 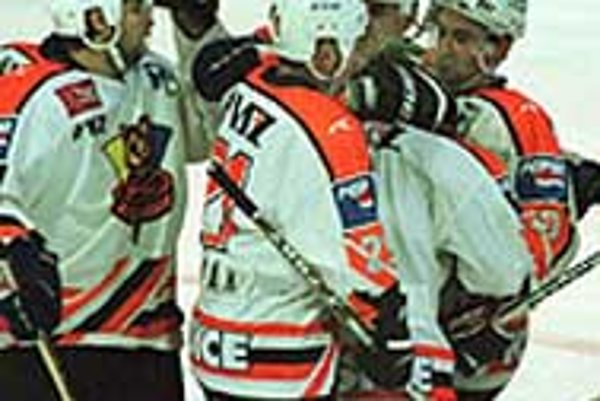 Font size:A-|A+0
The Košice hockey franchise has suffered through many losing seasons. But after being crowned Slovak ExtraLiga Champions last year, it looked like success in the country's big league had been secured for years to come.

A glimpse at this year's standings after 27 matches, however, tells another story. In one of the most remarkable collapses in Slovak hockey history, last season's champs are now dead last with only three victories and 11 points.

How did it happen? How did the best team in the league suddenly find itself outscored 61 to 127? For the answer we have to go back to 1996.

The Košice hockey squad is owned by Alexander and Július Rezeš, a father-son pair who also own a stake in Slovakia's largest industrial company, steel-maker VSŽ. The Rezeš duo since 1995 had been buying into everything they could - media, insurance firms, banks and sports clubs - and in the process piling up some dangerous debts. In May, 1996, the Rezeš family bought another sports property, the Czech football club Sparta Prague, for one billion Slovak crowns (then about $35 million). The purchase would turn out to be a disastrous business deal.

The former Sparta owners had saddled the club with some 300 million crowns in debt. VSŽ funds were poured into the club, but to no avail. In early 1999, when a new VSŽ management team under the leadership of Gabriel Eichler finally bailed out, the Czech club fetched only $10 million (430 million Slovak crowns).

As the post-Rezeš VSŽ bosses began to shut off financial flows to 'non-core' activities like sports, members of the firm's Košice hockey, football and handball squads grew restless. Halfway through last year's hockey season at the end of 1998, many players complained publicly and all began considering whether their hockey futures lay in Košice.

As the team's championship drive continued into February, 1999, more players demanded information on their salaries and contracts. No answers were forthcoming, however, and many players began looking to rival clubs for roster slots, even as they continued training and winning for Košice.

Events came to a head just before the April championship clash with Bratislava's Slovan team, when coach Ján Selvek demanded that Košice ownership clarify the money situation or face the possibility of Košice boycotting the Slovan series.

"We don't know whether we'll play," said Košice and Slovak national team goaltender Miroslav Šimonovič at the time. "Players are thinking about the possibility of just not playing."

But in the end, Košice did play - and played well, beating the heavily favoured regular season champion Slovan three games to one and taking home the championship. In reward for their heroic efforts, VSŽ President Eichler announced that the firm would release four million crowns to pay the victorious Košice squad.

"Mr. Eichler promised that we would get our money," said a jubilant Coach Selvek after the winning match. "The Rezeš's also spoke to the players before the series because they wanted to motivate them."

But the party ended all too soon. Still bitter at management for a year of salary and contract woes, almost every Košice player left the 40-man-team, annihilating the championship roster.

Assistant coach Milan Jančuška stayed, and was immediately faced with the daunting task of re-tooling a deserted team. He tried to lure new junior players from Spišská Nová Ves, Prešov and Trebišov, but not even youngsters were keen on playing for a skeleton Košice team.

The team felt apart, and although Šimonovič and national team defenceman Babka both still had contracts, they asked to be released. Coach Selvek declared that he would not lead a team with such low ambitions, and left as well.

Peter Slanina, a former Košice hockey legend, took over as head coach. But he did not succeed. With his assistent Jozef Lukáč, the team of outcasts and has-beens notched only four points through their first 20 matches.

Once loved in hockey circles, Slanina by the end of October found himself in an unfamiliar situation as hometown fans, the press, and hockey professionals clamoured for him to be fired over the team's dismal results.

In Košice, the fans in particular had had enough. Whistling and jeering drowned the cheers on many nights as frustrated fans chanted the name of their lost Coach Selvek. On November 2, the fans got their wish - Selvek returned to his head-coach position.

"I was in Košice for a long time when the team always fought to stay on top," Selvek told the press. He added that a turn-around in the squad's fortunes would soon arrive. "The situation is not catastrophic even today," he boldly predicted.

Selvek's first move was to aquire the hockey services of two solid players to shore up the roster: goaltender Martin Klempa and defenceman Peter Gappa.

Next, in order to restore some pride to the team, the coach brought in two men extremely dedicated to the black and orange colours of Košice hockey: Milan Staž and Mojmír Boľík. "I know them very well," said Selvek.

Selvek also sent some of the current players packing. In a surprise move, Roman Gavalier, a defenceman with national team experience was told to leave the club after a match against Poprad (3:3).

"I expected much more from such a player," said Selvek. The coach was also angered by the performances of Ihnačák and Bukna - two veteran players - who were levied fines for their poor play. As a final sign that no job was secure, he reduced the team roster from 40 players to 31.

Under Selvek, signs of life have begun to emerge. The team has earned seven points in seven games since he took over. But their early season woes buried them in such a deep hole that Košice is still in last place, three points behind Spišska Nová Ves.

While losing is nothing new to this long-suffering franchise, nobody would have guessed that another rebuilding stage would occur so soon. But one thing is for sure - with Selvek once again installing a sense of team pride through his no-nonsense attitude, last year's ExtraLiga champs may be down now, but they won't be down for long.