On the surface, the Sloboda Zvierat ('Free the Animals' - SZ) animal shelter on Polianky Street in Bratislava appears to be a standard 'pound' - walking down its prison-like corridors is as disheartening here as it is anywhere else in the world. But a deeper look at the shelter's animals and the conditions they must live under reveals a far more disturbing and depressing picture.
On November 24, SZ was in the second week of a quarantine imposed by the Regional Veterinary Authority because of an outbreak of the 'parvo' virus, which is deadly to dogs. But because the shelter does not have the space to properly separate the healthy dogs from the sick ones, the virus is spreading, said SZ Veterinarian Karol Hudec. 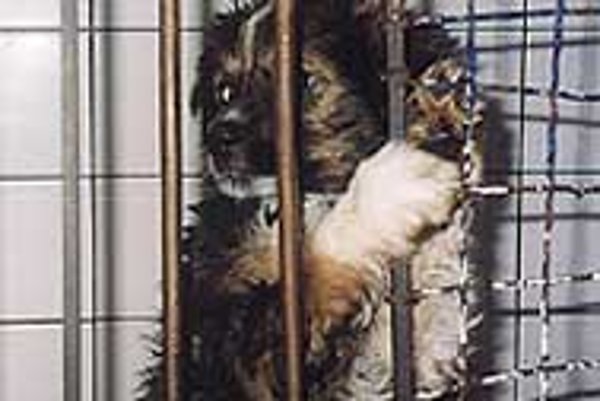 Font size:A-|A+  Comments disabled
On the surface, the Sloboda Zvierat ('Free the Animals' - SZ) animal shelter on Polianky Street in Bratislava appears to be a standard 'pound' - walking down its prison-like corridors is as disheartening here as it is anywhere else in the world. But a deeper look at the shelter's animals and the conditions they must live under reveals a far more disturbing and depressing picture.

On November 24, SZ was in the second week of a quarantine imposed by the Regional Veterinary Authority because of an outbreak of the 'parvo' virus, which is deadly to dogs. But because the shelter does not have the space to properly separate the healthy dogs from the sick ones, the virus is spreading, said SZ Veterinarian Karol Hudec.

On November 24, Hudec said that although only a handful of dogs had initially been infected, 34 of the 57 dogs at the shelter had subsequently contracted the virus and may die. He said he expected the virus to spread even further.

"The main problem is the [shelter] property," Hudec said. "This building is too small and not properly equipped to be a shelter. We have space for 35 dogs, but today we have 57 and in the summer we may have as many as 100. Some of them are sick and contagious, but we don't have a proper quarantine area separate from the shelter, which means that when one dog gets sick, it spreads to the healthy dogs."

Slovak shelter workers and veterinarians admit that the services they provide are not enough to prevent healthy animals from dying. With funding left up to local municipalities, shelters say they are under-staffed, under-stocked with medicine and food, and are becoming over-crowded breeding grounds for infection.

SZ workers are not animal abusers, but a dedicated and low-paid staff who do their jobs because they love animals. An example of this is SZ's 'no-kill policy' - unlike other animal shelters around the world, SZ refuses to put any of its animals to sleep, except those fatally infected with a virus or so seriously injured that they aren't expected to recover.

SZ Director Ladislav Ďurkovič said he would never consider changing this policy. "I love animals and we will not kill them," he emphasised. "We don't want a normal shelter policy here, of 'find the animal, keep it for a while and then kill it if nobody wants it.' We have some dogs here who have been with us for over two years."

Hudec, however, said the shelter takes the 'no-kill policy' to extremes at times. "I picked up one dog that was blind, paralysed and very sick," Hudec said. "I wanted to put him down but they told me to operate and try to save him. I did, but he died five days later."

Established in 1995, the Polianky street shelter has housed a total of over 10,000 animals. Most of the tenants have been dogs, but the shelter has also housed cats, deer, foxes, rats, rabbits, hamsters, pigs and snakes. Ďurkovič said that of the 2,031 animals sheltered in 1998, "80% were just found on the street and 20% had been abused by their owners."

In order to provide better for the animals, Ďurkovič said that SZ must have a properly equipped shelter and more funding. "We need an up-to-date and bigger shelter, and we need more money to do this," he said. "We have asked the [Bratislava] mayor [Jozef Moravčík] to help us, but so far we've got nothing even though we are the only major European city without a real animal shelter."

For each of the last three years, the city of Bratislava has allocated 1.25 million Slovak crowns ($30,000) annually to fund the shelter; the same amount is donated every year by Slovak citizens. Given the shelter's costs, Ďurkovič said, the money is not enough: 300,000 crowns goes on rent of a substandard building, 200,000 crowns for food, 150,000 crowns for drugs, 50,000 crowns for phone bills, and the rest on salaries, the maintenance of the rescue ambulance and other costs, he said.

The supply is simply not meeting the demand, Ďurkovič added. The shelter has a 24-hour hot line that citizens can use to report cases of abuse, lost pets or injured animals. The line receives over 30,000 calls per year.

SZ spokesman Marek Ondrejka cited a July, 1999 poll conducted by the international AISA polling agency which revealed that 80% of Slovaks want better animal shelters in Slovakia. "Every living creature should have a place in a civilised world," he said. "This is not yet the case in Slovakia."

Ondrejka added that the problem was more widespread than just the Polianky shelter. SZ operates five shelters in Slovakia - in Lučenec, Nitra, Piešťany and two in Bratislava. He said he knew of two other shelters in the country, but that many regions simply had a 'designated person' whom people could call if they found an injured or lost animal. "Slovakia has a total of seven shelters and the Czech Republic has 55," he said.

Hudec said that given such obstacles, SZ workers often find that their best efforts to save animals are frustrated by poor conditions at animal shelters. "In February, I picked up a five-year-old Doberman that had been severely beaten," he recalled. "The dog's throat was torn open, and she was very weak. I operated for over two hours and gave her some pills afterwards. I thought the prognosis was good, that she would survive."

"We put her in a cage overnight," Hudec continued. "The next morning, I came to check on her and she was dead. Wild rats had got into the shelter and attacked her - she was so weak she couldn't fight back. Those are the kinds of problems we have here."

Although Hudec said that the case of the Doberman was exceptional, he said that inadequately prepared shelters were in effect a "health hazard for the animals."

Bratislava resident Zuzana Pobiecká, who adopted a dog from SZ this past summer, agreed that shelter conditions were poor. At the shelter, the young mutt puppy appeared to be in perfect health. But when Pobiecká took the animal home, the dog fell ill from a virus he had contracted at the shelter and died. Hudec said that he knew of similar cases.

For SZ employees and volunteers - in Bratislava alone there are over 1,200, mostly children who take the dogs for walks - being around so many abused dogs leaves them with the inevitable question of 'Why?'

According to Ľubomír Faltán, the director of the Slovak Academy of Science's Sociology Institute, the answer is clear. "Animals can't talk back - you can shout at them and beat them," said. "For people who are not successful in society, beating an animal is the safest and easiest way to release stress."

Danica Daudová, a psychologist at the Advisory Centre of Psychology Services in Bratislava, said that the problem is not likely to go away. "People who beat their animals have disturbed personalities, and they have always existed," she said. "And they always will."