Slovakia's support for the US-led operation against terrorism in Afghanistan has been warmly welcomed by the Allied nations.
However, the extent to which Slovak support and resources will be used remains a closely guarded secret.
Speaking at a press conference on October 10, the US Chargé d'Affaires, Douglas Hengel, repeated President Bush's message that the war against terrorism was not a war against Islam.
He praised Slovakia's help in America's fight against terrorism, and said the efforts would help the country in its quest for Nato membership. 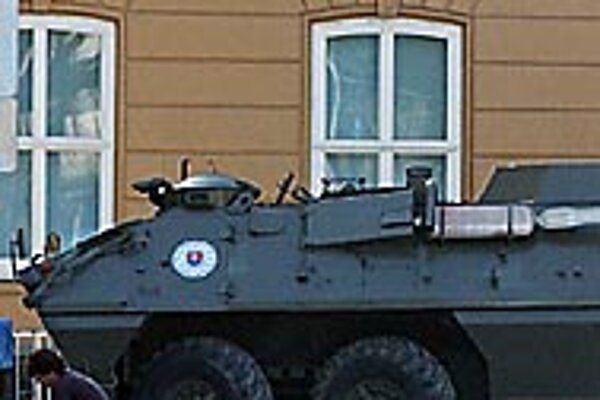 Font size:A-|A+0
Slovakia's support for the US-led operation against terrorism in Afghanistan has been warmly welcomed by the Allied nations.

However, the extent to which Slovak support and resources will be used remains a closely guarded secret.

Speaking at a press conference on October 10, the US Chargé d'Affaires, Douglas Hengel, repeated President Bush's message that the war against terrorism was not a war against Islam.

He praised Slovakia's help in America's fight against terrorism, and said the efforts would help the country in its quest for Nato membership.

Slovakia is hoping to receive an invitation to join Nato next year, and Hengel said that in behaving like a de facto NATO member, Slovakia had improved its chances of acceptance.

He said: "It's another sign. People remember these things"

He also revealed that the US and Slovak intelligence forces had been co-operating "extensively" since the September 11 terrorist attacks on New York and Washington.

He told reporters that the US had received some "very useful information" from the Slovak authorities, although he declined to expand on the nature of the intelligence shared between the two states.

But he insisted there were no FBI agents working covertly in Slovakia.

Slovakia recently voted to open its airspace to US warplanes and civilian and military bases for use by American and European troops. However, Hengel refused to discuss any US military plans and would not confirm how and when Slovak bases might be used in the future.

On the night of October 11, just hours after America launched its air assault on Afghan territory, Prime Minister Mikuláš Dzurinda told Slovaks the operation was a "fight for core human values".

Speaking on national television, he said: "A resolute joint campaign against terrorism is necessary. So far, the methods of fighting this evil have failed to prevent a further escalation of attacks by terrorist groups and individuals.

"The duty of each government is to protect the safety of its citizens against any danger and especially such a deceitful one. We will do our utmost to make our citizens feel safe at home and throughout the world.

"The past couple of days have confirmed that Slovak citizens understand the seriousness of the terrorist threat, support the response of the government, and feel solidarity with the American people.

"It has also been shown how important the coherence of all political forces is with regard to fundamental questions of foreign policy."

The vocal support Slovakia has expressed for Nato and US aims has been backed up recently by various legislative and policy changes.

A new Bank Law passed on October 5 which allows for the freezing of accounts if either the US or European Union adopts international sanctions against specific groups or countries was praised by Hengel.

Finance Minister Brigita Schmögnerová said that the laws were among the most important economic legislation passed in Slovakia in recent years.

The legislative committee of the cabinet debated a national security bill that would allow a proposed security council to declare a state of emergency in the event of a terrorist attack. The bill is expected to be presented to parliament next month.

Work has also started on a state-of-emergency strategy, with the government setting guidelines on what basic rights and freedoms would be limited in a crisis, as well as how to mobilise the economy to ensure state security. Prime Minister Dzurinda expressed confidence last week that parliament would pass the new legislation with the required two-thirds majority.

Trade deals conducted in the mid 1990s have also been the subject of intense scrutiny in recent weeks. Slovak firms have denied having had contact with associates of Osama bin Laden. However, a report presented to cabinet October 10 by Economy Minister Ľubomír Harach showed that from 1995 to 1996 Slovakia sent Sk62 million ($1.3 million) worth of anti-tank missiles and other munitions to Afghanistan. Harach refused to say which firms were involved, or which group in Afghanistan had received the shipments.

Shipments of chemicals such as sodium sulphide, which can be used to make weapons, had also been made to Iraq, the minister revealed.

Defence and terrorism experts have said that investigating such transactions and tracking the financial activities of terrorist groups would be a real problem for any government.

"These people are incredibly good at covering their tracks. And frankly, it is unlikely anyone like Bin Laden would be using Slovakia for these kind of activities," said Alex Vatanka of Jane's Sentinel, part of Jane's Information Group, one of the foremost authorities on defence matters.

The only party to publicly protest the US-led operation has been the Slovak National Party (SNS). Party chairperson Anna Malíková said they were opposed to "uncivilised and un-Christian methods".

Meanwhile, the Slovak Migration Office said it would not offer temporary asylum to Afghan refugees displaced by the current crisis. Migration Office official Anna Sidová said any Afghans arriving in Slovakia must apply for permanent asylum or face deportation. In September 624 displaced persons from the war-ravaged state arrived in Slovakia.