SVINIA - When American Craig Johnson first visited this Roma settlement in Slovakia's 'far east' two years ago, he was appalled by the desperate living conditions.
"It was shocking. I had seen a video about the Svinia Roma before I came, so I was somewhat prepared. But it was still shocking," he said.
Today, the settlement remains a miserable scene. Gaunt dogs scavenge among heaps of refuse in the nearby creek; a man with one leg and no crutch hops around a puddle clotted with trash; a naked child, his face and upper chest crusted with mucus, brandishes a three-inch knife. 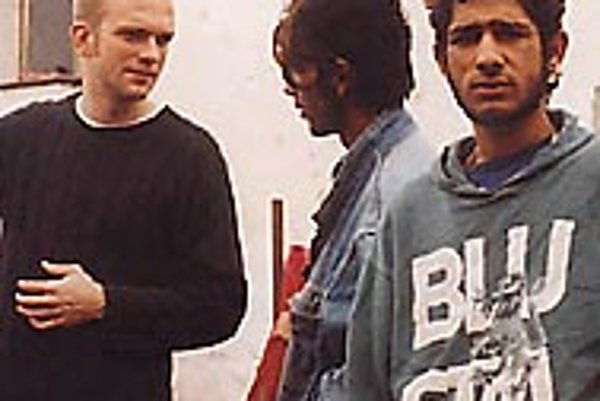 "It was shocking. I had seen a video about the Svinia Roma before I came, so I was somewhat prepared. But it was still shocking," he said.

Today, the settlement remains a miserable scene. Gaunt dogs scavenge among heaps of refuse in the nearby creek; a man with one leg and no crutch hops around a puddle clotted with trash; a naked child, his face and upper chest crusted with mucus, brandishes a three-inch knife.

"It's better than nothing, but not by much," said Mariana Dlugošová, the settlement's social worker.

Johnson and Dlugošová are part of a plan called Project Svinia, which aims to provide long-term solutions to the settlement's horrendous conditions. They hope that today's flimsy wood-frame shanties with mud-packed walls will soon be replaced by modern houses, complete with plumbing, heating and insulation.

The housing scheme differs from other plans to assist Slovakia's Roma in that it provides no charity. In the first phase, five new homes will be built, with the recipients expected to help with construction, and then pay back the construction costs in full. If this launch is successful, more homes will be built under the same scheme.

The project's backers, in eschewing charity, understand they are risking failure. The destitute Roma are expected to cover a total bill of between Sk300,000 to Sk500,000 ($6,400 to $10,700) for each new house, and will be given 20 to 25 years to repay the money (Sk12,000 to Sk25,000 per year). Although the average monthly wage in Slovakia is Sk12,000, unemployment among the Slovak Roma runs at nearly 100%, with most living off the few thousand crowns per month they receive from welfare.

"It's a risky project," Johnson said. "I can't guarantee they will pay us back, so we will likely provide training programmes to teach families to compose a family budget.

"We'll teach them skills that we hope will give them the ability to pay us back. And, of course, if they do pay it all back, they become the official owners of the property."

The video Johnson viewed before first touring the Svinia settlement was prepared by David Scheffel, a Canadian university professor.

In 1993, Scheffel led his students on a study-abroad programme in Slovakia. When he asked to tour a typical Roma settlement, he was directed to Svinia, eight kilometres north-west of Prešov.

He returned to Canada and began searching for organisations willing to help, including a group called Habitat for Humanity.

Habitat for Humanity has assisted in the construction of 110,000 houses in 80 different countries since 1976. The Svinia project is its first in Slovakia.

"We don't construct houses for free," explained Johnson, Habitat's Svinia project manager. "The families have to help build the homes themselves and they have to pay it back in full. This will be difficult for them because their only income is from social benefits, and they have no experience with saving money and budgeting.

"But while we recognise that we could lose our investment, we believe strongly that everyone has the right to a decent home."

Michal Vašečka, a Roma analyst for the Institute for Public Affairs think-tank in Bratislava, said that Habitat's approach was the best way to tackle Slovakia's Roma question.

"Having them build it themselves is the only way," he said. "It's the same with all people: give them something for free and they don't care about it. But by getting the Roma involved, this project has a chance to make a real difference."

Sixty-five families are interested in owning one of the five new homes; 650 Roma live in the settlement.

Roma have in the past been widely criticised by Slovaks for abusing apartments given them by the state during the communist era. However, Ignác Červeňák, president of the settlement's Roma civil association (called Suno, or dream, in the Roma language), said that the Roma would value their new housing.

He acknowledged that Roma had in the past destroyed government-funded flats, but said that this scheme would be different.

"People will see - when we build something ourselves, we do not destroy it. Some Roma have destroyed their flats, but none of us would ruin a home we built with our own hands," he said.

With only five homes to be constructed, Johnson said that a selection process would occur next year to decide who would get a chance at new accomodation.

"We'll challenge the families to demonstrate qualities which would make them good home owners. For example, we may have them save a certain amount of money each month. We may also have them do simple community service projects, like painting blocks of flats or building fences," he said.

Besides Habitat for Humanity, several other parties are involved in Project Svinia.

A group of health care experts from Canada is training the Roma to clean up the now unsanitary settlement.

Tomáš Hajduk, a volunteer from the Krajské centrum pre Rómske otázky (Regional Centre for Roma Issues), leads a programme aimed at mitigating unemployment: for 15 days a month, he leads Roma in making candles, then sells the finished products in the Prešov area.

Miloslav Mihok, the mayor of Svinia, has secured five hectares of land for the construction of the new housing, which will include rental flats to be funded by the city for those families not selected by the Habitat for Humanity project. The first foundations are to be laid early next year.

Roma analysts, while endorsing the project, have warned that the long-term nature of the Svinia Project may invite criticism in the short term.

"I don't know if this is the type of project where you'll immediately be able to see any appreciable difference," said John Young, of the European Union's Phare fund in Bratislava.

Young has visited 50 Roma settlements in Slovakia, including Svinia several times, and said that Svinia would "probably" receive Phare funding for infrastructure next year.

Roma analyst Vašečka also warned against hurried assessments. "We have to be careful how we evaluate this project. It's a fantastic chance to help a problematic settlement, but we can't expect miracles. The project organisers will have to stay there 25 to 30 years for permanent change to occur.

"Some people working on the Roma issue feel that we may have lost the current generation of Roma. We've got to save the next generation."