BANSKÁ BYSTRICA - Joseph Morten gained a reputation as a brave man and a fearless reporter during World War II. A correspondent for the American Associated Press (AP), he was lauded for his exclusive war stories from northern Africa, Italy, Yugoslavia, Romania and Slovakia.
While in Europe he interviewed Yugoslav President Marshall Tito, was the only Allied reporter to reach Bucharest in time to cover the arrival of the Red Army in August, 1944, and the first to have an interview with King Mihai of Romania.
In a New York Times editorial, the interview was described as having "all the elements of glamour, romance, comedy, dramatic suspense and rapid action." 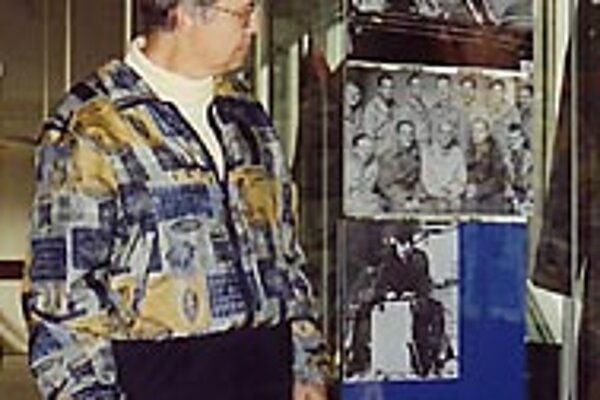 Font size:A-|A+0
BANSKÁ BYSTRICA - Joseph Morten gained a reputation as a brave man and a fearless reporter during World War II. A correspondent for the American Associated Press (AP), he was lauded for his exclusive war stories from northern Africa, Italy, Yugoslavia, Romania and Slovakia.

While in Europe he interviewed Yugoslav President Marshall Tito, was the only Allied reporter to reach Bucharest in time to cover the arrival of the Red Army in August, 1944, and the first to have an interview with King Mihai of Romania.

In a New York Times editorial, the interview was described as having "all the elements of glamour, romance, comedy, dramatic suspense and rapid action."

Yet in gaining his acclaim, he lost his life. He was executed January 24, 1945 in the Mauthausen concentration camp after being captured by the Nazis in the mountains of central Slovakia. He was the only war correspondent to be executed by the Germans.

He left behind a wife pregnant with his only child. He never met his daughter, never even learned her name. But 57 years later, Mimi Gosney is making sure that the name Joseph Morten is never forgotten.

"I lost my father before I ever met him. He died not knowing my name, yet I sense that we share similar interests. He was fascinated with this part of the world, and 57 years later, I stand where he stood. I can share with my son Joseph this part of his grandfather's history. I find that quite an honour," says Gosney.

Mimi Gosney is a volunteer for the US Peace Corps. Today she works at the Slovak National Uprising (SNP) museum in the central Slovak city of Banská Bystrica where her father is featured in an exhibit on US involvement in the SNP.

Joseph Morten landed at the Tri Duby (Three Oaks) airfield in the town of Sliač on October 7, 1944. He had planned to report the movements of the Slovak partisans resisting the Nazis in the forests and mountains of central Slovakia, and then to catch a plane out of Slovakia two weeks later.

But one week after he landed, Germans bombers destroyed the airfield. Morten was stuck.

He had accompanied the Office of Strategic Services (OSS, the US body which preceded the CIA) into Slovakia on a mission aimed at airlifting Allied pilots who had been shot down out of Slovakia. But when the Germans destroyed their exit route, the mission fled to Banská Bystrica, Morten in tow. Advancing Nazi troops then closed in on the city, forcing the group to flee again, this time to the mountain area today known as Donovaly, some 15 kilometres to the north.

Morten found company in the forests. "There were partisans there, members of the OSS, Jews hiding in the woods from the Nazis," says Grosney. "It was a classic wartime retreat, they were being pushed back."

After weeks of evasion, Morten's group found shelter in an abandoned mountain hut above the village of Polonka. They were starving and ill-prepared for the oncoming winter.

Fortunately, sympathetic villagers left food on the outskirts of town. When a blizzard struck, leaving many in the party with frostbitten and bleeding feet, one local made them new shoes.

On December 26, 1944, after hiding for a month in the freezing hut, the 18 mainly American and British members of the mission were captured by German troops. They were charged with espionage, jailed in Brezno, then moved to prisons in Banská Bystrica, Bratislava and Vienna, before finally landing in the camp at Mauthausen, a small Austrian village on the Danube.

AP learned that Morten had been executed a year and a half later based on the testimony of two Austrians. The first was a man named Willy, a local resident who had been in charge of the concentration camp's crematorium. He remembered the American, who had been unable to blend in among the European Jews, and confirmed his execution.

The second witness was a man named Mueller, an English translator for the Germans. He told investigators that he specifically recalled Joseph Morten because he had seen the American journalist write, and had been struck by the unusual way he wrote the letter 'm'.

Realising that their correspondent had been killed, AP published an article on July 8, 1946 announcing Morten's death.

"Joseph Morten, an AP war correspondent who distinguished himself by his coverage of the war in the Mediterranean, was executed by the Germans January 24, 1945, after being captured in Slovakia," the article read.

"He achieved a brilliant and extraordinary record of exclusive and significant reporting under the most difficult and hazardous of conditions. He was fired with determination to go where no other correspondent had gone, and get the story no one else could get."

John Trachta, a reporter for the Narodná Obroda (National Uprising) Slovak daily newspaper, told AP that he had seen Morten as he fled Banská Bystrica. "His last statement was that he would try to make it to Zvolen and fly out."

While her father failed to reach his destination, Gosney says she is now in a place she has been drawn to her whole life.

"I wanted to be here because of the personal ties. I'd visited before to see where Dad had worked during the war, and I've visited the hut above Polonka where he was captured," she said.

Gosney wears many hats at the SNP museum, but her main duty is looking after, and promoting, the exhibit on the US presence during the war.

In her post, she has become a de facto ambassador to US pilots visiting the museum and their pasts. She has revisited several crash sites with the fliers to search for the remains of their aircraft.

"I'm here to share cultures, share friendships, and keep history alive. Remembering the past is so important for future generations because if we forget our history we can repeat our mistakes. This is even more important than keeping alive the name of one man, even if he is my father."

But the legacy of Joseph Morten is not likely to die soon. After all, he was crowned a hero by AP, was posthumously awarded several medals of bravery by the US government and military, and was revered by acting president of Slovakia Joseph Lettric immediately after the war.

Speaking to a group at the old Savoy restaurant in Bratislava's Hotel Carlton in 1945, Lettric said: "In the person of Joseph Morten, a representative soldier and newspaperman, we met a daring man, a great democrat, and the son of a great free nation. We saw in him also a hero. His was a brutal assassination."

If Gosney has her way, it was an assassination that won't be forgotten.

"Dad and I are very much alike. He was an adamant believer in freedom of the press and he was passionately against censorship. He was not allowed to attend his junior high school graduation because he got into a big argument with his principal over censorship," she said.

"In many ways, I'm the same. I'm known by my friends as 'the loose cannon', because when something is wrong, or when something needs to be done, I just put my foot down and say, 'OK, let's get this settled now'.

"We never knew each other, but we seem to have shared a strong sense of freedom - neither of us took it for granted. My father died writing stories about it. The men of the mission may have died, but the principles they stood for have survived. We are the living proof. I find that quite an honour."