An international human rights lawyer said he has been targeted by right wing extremists and denied police protection.
Columbus Igboanusi, who lives in Bratislava, claimed an armed gang followed him to his home on the night of Saturday, October 20 and returned on Sunday, October 21.
Igboanusi said that after he left his office on Saturday evening, he noticed that a man had emerged from the bushes and was following him. 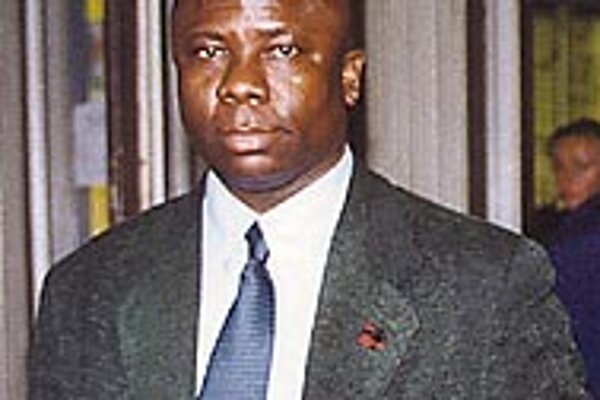 Font size:A-|A+0
An international human rights lawyer said he has been targeted by right wing extremists and denied police protection.

Columbus Igboanusi, who lives in Bratislava, claimed an armed gang followed him to his home on the night of Saturday, October 20 and returned on Sunday, October 21.

Igboanusi said that after he left his office on Saturday evening, he noticed that a man had emerged from the bushes and was following him.

Once inside his flat, Igboanusi heard a scratching noise at his front door. He walked into the hallway and saw the door handle shaking.

"I looked through the peep hole and saw four men, including the man who'd followed me. He was doing something to the key hole. Three men were behind him, two with drawn pistols aimed at the door and one with his hand in his front pocket.

"I was terrified. I began yelling 'help! help!' to alert my neighbours," he said.

The men fled and Igboanusi spent the night at a friend's home.

When he returned to his flat on Sunday his telephone immediately rang. But when he answered the caller hung up without speaking.

Igboanusi left again and called the police. He asked for 24-hour protection but he was told that the police could not spare officers because they were protecting the US embassy.

The second attack on his flat occurred later that evening. Igboanusi heard a noise in the kitchen and ran in to see broken glass and men outside the window trying to force their way in.

"I ran upstairs in my shorts and socks. I jumped out a second floor window and flagged down the police on the street. They came, but again said they could not offer me protection," he said.

But a representative of the Bratislava local police said the lawyer had not been denied protection. "Some policeman, who has no other responsibility, must have told him that lie. The police immediately took the necessary precautions for guarding his flat from the outside. There are two two-men teams watching his safety," he said.

The spokesman added that police in Igboanusi's neighbourhood were on alert, and maintained that Igboanusi had not asked for special protection.

"If anything suspicious occurs we will react immediately. He is a person who has a certain conflict of interests, and we will do everything to protect him," he said.

However, Igboanusi insisted he had not been treated fairly by the police.

"They were in my flat on Sunday night, but one hour later the second attack occurred. I met with the Bratislava Regional Police on Monday, and they invited me in to discuss what had happened. But they harassed me," he claimed.

"They asked me for my passport, they asked if I was a UN representative, they asked who funds the League of Human Rights Advocates, they asked if I engage in political activities in Slovakia. They treated me very, very badly. And then on Tuesday I read in the Nový Čás daily paper that I had rejected their offer for protection. This is all not true."

Igboanusi has both fought and observed several high profile cases of alleged human rights abuse against minorities in Slovakia, and has appeared frequently in the domestic media over the past two years.

He believes his work on behalf of the Roma minority has led him to become a specific target of neo-Nazi groups.

Igboanusi represented the Balážová family following the murder of Anastázia Balážová in northern Slovakia's Žilina in August 2000. The Roma mother of eight was killed while trying to protect her children from baseball-bat wielding skinhead intruders.

He also now represents the family of Karol Sendrei, the Roma man who was allegedly chained to a steel bar and beaten to death by police in the eastern Slovak town Revúca in July 2001.

Igboanusi says that a leaflet with his photo was circulated September 30 at an international gathering of skinheads in central Slovakia's Považská Bystrica district.

"The leaflet said that I was fighting against whites and inflicting injury on skinheads. It called on the Interior Ministry to expel me from the country for my actions," he said.

However, the Interior Ministry and the police say they are unaware of the leaflet. A ministry spokesman said: "I don't understand why we should expel him. He would have to break existing laws on this matter. However, nothing like this happened."

Igboanusi says he has been the target of many death threats, but that he will not stop his work on behalf of the International Club for Peace Research in Bratislava, which he represents at the UN offices in Vienna and Geneva, and the League of Human Rights Advocates.

"I am afraid for my life. I can't say anything if I'm dead. But I can't stop what I do.