After three years in government, the Finance Minister, Brigita Schmögnerová, says her political future beyond the September 2002 general elections will "depend on various factors".
Despite her guarded response she is not afraid to speak her mind, and during an interview with The Slovak Spectator on October 22, she was critical not only of the current government but also of her own party, the Democratic Left Party (SDĽ). 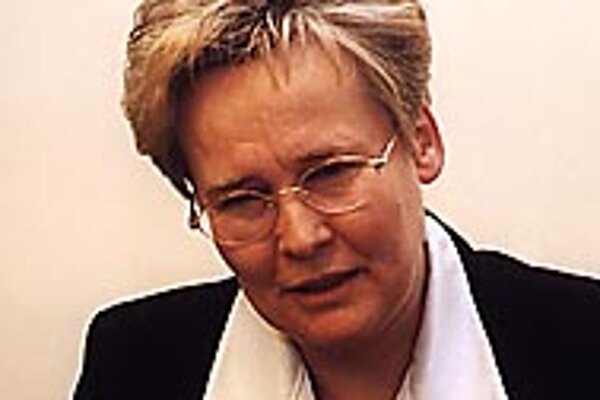 Font size:A-|A+0
After three years in government, the Finance Minister, Brigita Schmögnerová, says her political future beyond the September 2002 general elections will "depend on various factors".

Despite her guarded response she is not afraid to speak her mind, and during an interview with The Slovak Spectator on October 22, she was critical not only of the current government but also of her own party, the Democratic Left Party (SDĽ).

TSS: You are one of two women in the Slovak cabinet. In Slovakia, politics is still seen as a male domain. In your three years in your post did you have to adopt male standards of communication?

BS: I don't see any differences whether a cabinet member is a man or a woman. The Finance Minister post requires a decisive person, a person who is able to say no and is able to defend his or her arguments. It's a question of that person's character. There are many soft men with no persuasion skills.

TSS: Women's organisations in Slovakia have recently started to campaign for increasing the number of women in Slovak politics through a 30% quota system. What do you think about this measure?

BS: I think this form of positive discrimination is acceptable as a temporary measure. Why? Well, if a woman wants to get into top politics, as a rule men have broader elbows [ie are more aggressive - ed. note].

There is some experience with the quotas from the Scandinavian countries where today they have the highest proportion of women in top politics. They started this system over 40 years ago after the second world war, and the representation of male and female politicians is now 50-50.

TSS: Why do you think Slovak society tends to doubt women's leadership skills?

BS: The way of thinking of the majority of Slovak men is very conservative. Polls carried out on this issue have proven that most of them thought that politics was unequivocally a man's domain.

TSS: Slovakia is nearing general elections in September 2002. What are your plans, do you want to stay in politics or have you considered other career options?

BS: Much depends on the nearing SDĽ party general meeting and of course on the election results. Going to work for a private firm wouldn't be my first choice. I'd prefer to work in the public sector.

TSS: Have you ever considered running for the SDĽ chair post?

BS: As a minister I can't run for the post. Another thing is that my popularity has gone down dramatically. People think that the Finance Minister is responsible for everything, even for droughts or floods in the country. My popularity has dropped not only among the public, but also within the SDĽ. Therefore, even if I was allowed to run for the post, it wouldn't be the right decision.

TSS: Do you understand why some of your colleagues, many of whom are in the party leadership, do not support your actions as Finance Minister?

BS: Reforms are needed. Even a leftist party like we are must actively explain this to people. On the other hand, and unlike right wing political parties, the left must see that the social consequences of reforms are distributed equally and justly to all social layers. If the SDĽ managed to explain the necessity of reforms and secure the just distribution of the consequences of these reform, it wouldn't necessarily lose voter support.

There are several kinds of reforms. Some can be taken quickly, others take time to be prepared and carried out properly. We need to realise that society is not a laboratory where you can carry out experiments. Every step needs to be carefully considered.

TSS: The SDĽ has experienced a dramatic decline in voter support over the last three years, falling from 14.7% in the 1998 elections recently to less than the required 5% limit for entry into parliament. Do you agree with Pavel Koncoš, the Agriculture Minister, that a bad media strategy is to blame?

BS: There are several factors. One of them is certainly the fact that we are part of ruling coalition which had to introduce several economic austerity packages. These had the greatest negative social impact particularly on the SDĽ voter base.

Certainly, our media strategy was another factor, but there were other factors as well and I think we're now talking openly about them before the general meeting. The party has lost its image of an uncorrupted party, a party of experts in various fields, a party which had traditionally attracted younger and better-educated people.

TSS: Not only the SDĽ, but also the government led by Prime Minister Mikuláš Dzurinda has lost popularity over the three years. Did the current leaders make promises they could not keep, for example the 100% wages increase which Dzurinda had been promising to people?

BS: They did, that's true. In Slovakia the political competition is about who is more populist. The 1998 pre-election campaign was no exception to that rule. We didn't find the courage to tell voters that no miracles could be expected of us. I think the new political parties haven't learned from this and are doing the same type of campaigning. I think this will continue to occur until the nation itself understands what is and what isn't realistic.

TSS: Under the previous government led by Vladimír Mečiar, you were a prominent critic of the government's drive to create influential businessmen who were friendly to the politics of the ruling parties. What did the current government do to get rid of similar influential interest groups?

BS: The current government has disappointed voters in two ways. It failed to punish those who through such practices and against the law gained great property. We had been telling people that we would get them and place them behind bars. Another thing is that some of these groups gradually managed to push their interests through some high officials of the current governmental parties.

TSS: Can you be more specific?

BS: (Laughs) When I finish my term in the government I'll definitely be more specific.

TSS: The SDĽ has gained a reputation as a corrupt party. Friendly contacts between Jozef Migaš, SDĽ head, and the former head of the infamous and recently bankrupt Devín Banka financial house have made people doubt the sincerity of your party's claims.

BS: The tragedy of the SDĽ lies in the fact that it failed to realise that a leftist party cannot afford to be suspected of clientelism. Leftist parties are judged much more harshly than parties from other parts of the political spectrum. The SDĽ is not more corrupt than any other party, but because it's a leftist party voters are much more critical of it.

If this ruling coalition managed to isolate itself from various interest groups, our job of governing would be much simpler. The SDĽ has definitely learned that the public is very critical, and the party has even drawn up a ethical codex for its top representatives. But only time will show whether it has learned its lesson sufficiently and won't repeat its mistakes.

TSS: In March 2000, former head of the Slovenské elektrárne energy utility (Slovak Electric - SE) Štefan Košovan, who was SDĽ's candidate to the post, and who had before worked as head of the board of directors at Devín Banka, was recalled from his post following a state audit which uncovered financial irregularities at SE. Later that year your party boss Migaš supported a non-confidence vote against PM Dzurinda, which was seen as an act of revenge for the recall of Košovan. What do you think about the practice of putting political rather than professional candidates in top posts at state companies?

BS: After three years in government I can say this practice is sick. The only political nominees should be the minister and deputy minister; all other posts should be filled with people who go through tough and proper job tenders. We need experts, which are not always found among political nominees.

TSS: Do you see the will to take that proper path?

BS: I'm afraid it will take several more election terms until Slovak society manages to get rid of such vices.

TSS: Approaching regional elections, voters see the SDĽ creating regional coalitions with the opposition HZDS party. The SDĽ and HZDS have agreed on common candidates for the heads of Trnava, Košice, and Nitra elected parliaments. Do these partnerships promise a willingness by the SDĽ to create a future government with the HZDS after the 2002 elections?

BS: No. It's really not possible to draw such conclusions. Regional and municipal coalitions are always dependent on the actual division of political powers in these particular areas. I'm not excited that we've entered into coalitions with the HZDS, but with the majority system, if a party with small voter support wants to remain part of the decision-making process, it must create such coalitions.

TSS: Don't you think that by lining up with the HZDS the SDĽ is further jeopardising its already low voter support and credibility?

BS: Perhaps yes, but we have to explain to these voters that we must differentiate local, regional, and central levels of politics. In no way does this mean that similar coalitions will be formed after 2002 elections.