Slovak-Arab asks for a real solution

The September 11 attacks sent shock waves through Slovakia's some 400-strong Arab community.
Perhaps no one was more affected than Nidal Saleh, whose family and friends still live in the West Bank, the main front of the Palestinian-Israeli conflict that fuels Arab animosity towards the West.
Son of the former Jordanian Defence Minister, Saleh has been living in Slovakia for 40 years. He left Palestine in the 1950s to study pharmacy in Slovakia, where he later earned a PhD. After 1989 he founded a consulting company in Slovakia. 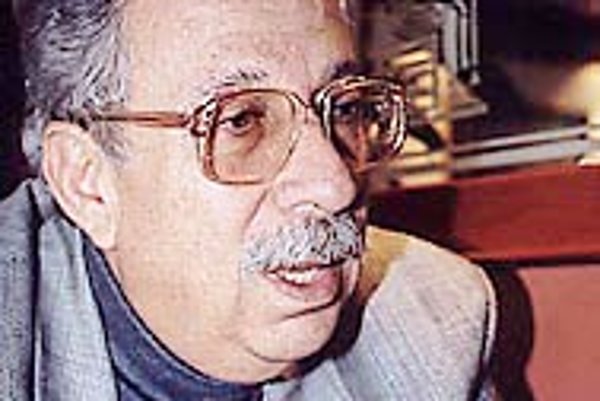 Perhaps no one was more affected than Nidal Saleh, whose family and friends still live in the West Bank, the main front of the Palestinian-Israeli conflict that fuels Arab animosity towards the West.

Son of the former Jordanian Defence Minister, Saleh has been living in Slovakia for 40 years. He left Palestine in the 1950s to study pharmacy in Slovakia, where he later earned a PhD. After 1989 he founded a consulting company in Slovakia.

At 65, a widower and father of four Slovak children, with family scattered across the globe, Saleh has retired in Slovakia, where he keeps a close eye on politics abroad and in his homeland.

"I have family in America, my sister, her children, hundreds of cousins. An attack on America is an attack on my family. I condemn attacks on innocent people," he said.

"But I ask Americans to think about the reasons behind the attacks. A Palestinian is thrown off his land by foreigners from Europe and in frustration he takes a bomb and throws it. He is a terrorist. But [Israeli Prime Minister] Ariel Sharon has declared that there are three types of Palestinians: 'The first I will kill, the second I will imprison, the third I will drive away.' Those are terrorist words.

"[US President George] Bush now says we Palestinians should have a state, but hasn't exerted real pressure.

"If you solve the Palestinian question, you take the argument away from fundamentalist groups. They have two arguments: poverty and Western policy in Israel and Iraq. If you solve these problems, they have no arguments.

Saleh also doubts the effectiveness of the American led campaign against Afghanistan.

"It's like an elephant struggling with a fly. Who are they killing? There is nothing to bomb. People have nothing to eat. There are three million refugees. When winter comes many of them will die. There are many ways to eliminate Bin Laden. Is bombing innocent people one of them? I am not a general. But I ask, who is suffering?"

His family has not escaped the violence, and on a rare visit home he said his own life was in danger.

"This wasn't the first time. My grandparents lived in [the Palestinian town] Bramble. In 1947, when war erupted between the Arabs and Jews, they kicked us out of Bramble and we fled to Nablus. My mother and sister are there, my house is there.

"I went home a year and a half ago, before the new fighting started, to check on some land I own in a village near Nablus. It turned out Russian Jews had confiscated the land and started a settlement.

"I got in my car and headed back to Nablus. Along the way I picked up a hitchhiker. Where the village road intersected with the main road stood an Israeli tank and soldiers with automatic weapons. There was a stop sign.

"Since I have been living in Europe for many years, I thought, look to the right, look to the left, nobody is coming, go. The next moment, four automatic weapons were pointed at my head. The soldiers were shouting in Hebrew, which I don't understand. The hitchhiker urinated in his pants.

"I pulled my Slovak passport out and shouted in English 'You bastards, what are you doing? I'm a tourist.' A soldier took my passport and inspected it. 'The sign says stop,' he said. 'I stopped,' I said. 'Do I have to wait all day?' He said, 'You will go when I tell you to go.' 'Why didn't you tell me to go?' I said.

Later my mother said the same thing. 'You could have been killed and nobody would care,' she said.

"History prevents Arabs and the West from knowing each other. If you ask a Palestinian child what England is, he'll say the country that created Israel. If you want to eliminate terrorism, you have to understand history and make balanced choices.

"Beyond the situations in Israel and Iraq, the West should understand that poverty and poor education cause terrorism. When a poor Arab is told paradise is waiting for him, he will want to believe it because his life is miserable. But if he is prosperous and educated and he is told about how good the second world is, he will say 'so what, I'm already living good.'

"Before 1989 Czechoslovakia supported Palestinians. Then they switched sides. Slovakia wants to go to Europe by way of Nato. They are eager to show the US they are on their side. Before they were kissing the Russians' arses; now they are kissing the Americans' arses.

"If we kill Bin Laden, someone will replace him. I support Hossni Mubarik's [the President of Egypt] suggestion of creating a UN congress to define terrorism and discuss how to eliminate it. Wherever people are desperate, terrorism can arise. Many terrorists don't care about Palestine. They use the issue for their own purposes."