Bat catchers get tagging in Paradise

SLOVENSKÝ RAJ - How many bats live in Slovakia's Paradise? That was the question a group of zoologists tackled during a 'bat conference' held in this national park October 18-21.
Slovenský raj (Slovak Paradise) is home to over 300 caves, making it a haven for the nocturnal flying mammals. But nobody can tell how many bats are in the park because none of the creatures have been tagged to assist in population studies.
"Only 10% to 15% of the caves have been checked, so I can't say how many batsare here," said Bedýich H jek, a zoologist employed by the park. 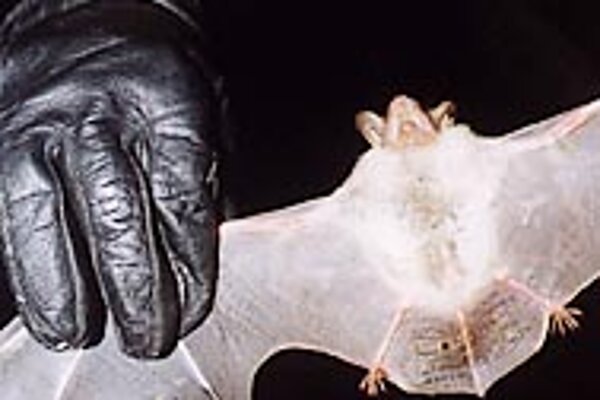 Font size:A-|A+0
SLOVENSKÝ RAJ - How many bats live in Slovakia's Paradise? That was the question a group of zoologists tackled during a 'bat conference' held in this national park October 18-21.

Slovenský raj (Slovak Paradise) is home to over 300 caves, making it a haven for the nocturnal flying mammals. But nobody can tell how many bats are in the park because none of the creatures have been tagged to assist in population studies.

"Only 10% to 15% of the caves have been checked, so I can't say how many batsare here," said Bedýich H jek, a zoologist employed by the park.

"But it's very important to find out because the more we know about the bats,the better we can protect them."

The convention was held so that the zoologists could discuss how to improve survey methods of local bat populations. Tagging can be dangerous to the bats, so the experts wanted to debate the safest methods.

Eli Fenichel, an American Peace Corps volunteer who works in the park, said that tagging was crucial to understanding the bats.

"If I know I have 100 marked bats in a given area, in a few weeks I can come back and, say, catch 100 bats in a night. If 10 of them have marks, then we ca start estimating the local populations," he said.

"Bats are very sensitive to environmental changes because, for one, they are very small. They could be severely affected, for example, by temperature changes in caves and forests," he said.

"Also, some bats reflect water pollution because they prey on small fish or aquatic insects. So if their population drops, we know that something may be wrong with the local water sources."

But Slovakia's bats are not currently marked, in part because of the risk involved.

Because bats are so small - take away its wings, and Slovakia's average bat is no bigger than a mouse - strapping a tag to their fragile bodies can have lethal results.

One outdated method was to strap a bracelet around the bat's ankle. But if the leg was damaged in any way during the process, the bat would die because it could no longer suspend itself upside-down to sleep.

Similar dangers existed with the so-called 'wing band', a small hoop which pierces the bat's fragile yet essential wing. A bat's wing is so delicate that a human could easily poke a finger completely through. The band can also tear the wing, hindering its ability to fly and find food.

Radio transmitters strapped around the bats like a mini-backpack provide the most information, but are too expensive for the Slovak park's budget. Moreover, the devices have short lifespans (four months) and provide little long term information.

Slovakia's bat experts would like to employ a different tagging method, one involving colour-coded plastic necklaces. The necklaces are cheap, safe, and allow the zoologists to distinguish between individuals.

But even this system has encountered problems.

For one, the bands are not made in Slovakia. While a zoologist in Mexico has agreed to ship 1,000 bracelets for $150, Slovenské Raj has had problems transferring money from its Slovak bank to the Mexican account.

Currently, the only tagging in the park is done with 'white-out', used by office workers to erase typing mistakes. On the night of October 18-19, the group caught bats outside Stratensk cave, home to over 2,000 bats and one of the largest bat hibernation locales in central Europe.

They set up a net approximately 10 metres long and 1.5 metres high outside the cave's mouth high up on a cliff, then waited for nightfall and sat silently in the dark.

Soon, the bats began flying into the net. Flashlights aided the designated bat handler, who wears a glove because a bat bite hurts. He would free the bat from the net and bring it to the head zoologist to record the species, sex and any curious markings (one had a hole in its wing). The zoologist then applied a drop of white-out to the bat's head.

The mark comes off in a couple days, but is important so that the team knows if they recapture an individual later that night.

Over a six hour period at Stratensk cave, there were 80 catches of 66 individuals. The most frequently snared were the Greater Mouse-Eared Bat (Myotis myotis) and the Natterer's Bat (Myotis nattereri).

One of the prize catches of the evening was a Grey Long-Eared Bat (P. austriacus). This bat is unique for its extremely long ears, which curl back like a ram's horns. The catch inspired childlike oohs and ahhs, even among this seasoned bat team.

H jek said: "We don't want to catch every bat, of course. But if there's a population crash, we need to know about it. Only then can we figure out what's going on and how to solve it, how to protect the bats."