TRNAVA: Pavel Koncoš, Democratic Left Party (SDĽ)'s new chairman received an excited standing ovation after the majority of the party's delegates elected him to the post.
While the country celebrated the 12th anniversary of the fall of communism November 17, the 411 SDĽ delegates cheered over victory of "comrade" Koncoš.
However, Miroslav Kusý, political analyst and a professor with the Bratislava's Comenius University doubted the choice would help the party increase its low voter support. 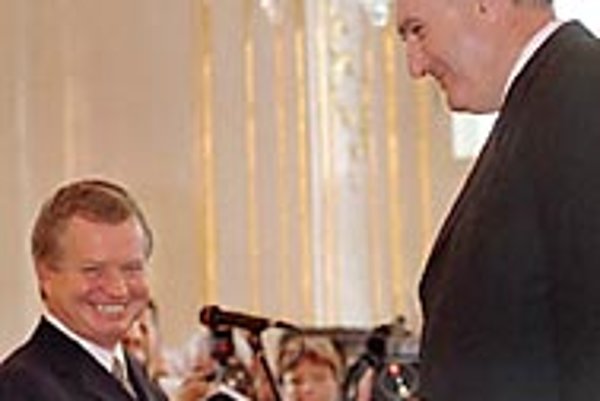 TRNAVA: Pavel Koncoš, Democratic Left Party (SDĽ)'s new chairman received an excited standing ovation after the majority of the party's delegates elected him to the post.

While the country celebrated the 12th anniversary of the fall of communism November 17, the 411 SDĽ delegates cheered over victory of "comrade" Koncoš.

However, Miroslav Kusý, political analyst and a professor with the Bratislava's Comenius University doubted the choice would help the party increase its low voter support.

He dubbed Koncoš, the country's agriculture minister, a bearer of the party's "return to communist fundamentalism, supported by the most conservative old communists who after the 1989 revolution joined the reformed communist SDĽ.'

However, Koncoš said he would not co-operate with the Communist Party as it was "politically dead".

A tense atmosphere connected to the party's decline in popularity pervaded the SDĽ meeting. In a November 20 survey carried out by Markant polling agency SDĽ scored 4.7% voter support, down from 14.7 % in 1998 parliamentary elections.

Jozef Migaš, former SDĽ chair gave up his post shortly before the candidates' presentations and recommended his supporters cast votes in favour of Koncoš.

Koncoš "proudly identified" himself with the "socialism with human face" message in his speech. Analysing the reasons of the party's lost credit Koncoš said that "some SDĽ members collaborated with right wing journalists" and "informed on our own comrades".

Weiss, who is generally considered to be media friendly reacted to the remark in his presentation.

"I don't agree that we can blame media for our bad image. Journalists may not like Mečiar or Fico, but their voter support is still much higher than ours," Weiss said.

While Weiss maintained that SDĽ did the right thing in 1998 when it decided to join the current coalition, Koncoš was critical of the government his party is a member of.

He said that after the left of centre coalition political parties weakened as a result of their internal changes "executive and political power got into the hands of conservatives and ultraliberals" the cabinet's social policies wavered.

"We in the SDĽ must consider social protection a productive factor, not a burden like our coalition partners, who degrade social policy to staging charity events and serving Christmas cabbage soup to the homeless," Koncoš said.

Unlike political analysts, Koncoš believes he could help the party to gain "about 14%" in the upcoming parliamentary elections in September 2001.

"Koncoš will have a tough time keeping the electorate that the party still has today," said political analyst Grigorij Mesežnikov, head of Institute for Public Affairs think tank.

Both Kusý and Mesežnikov agreed that Koncoš's potential lies in his ability to address rural, farming and generally less educated voters.

"These, however, will be more prone to support Mečiar," Mesežnikov said. He added that although it was highly unlikely that Koncoš could considerably increase the party's preferences, the "SDĽ could make it to parliament next year" on 5 to 6% support.

The party is clearly diverting from its current coalition partners, and Koncoš himself illustrated this diversion in his ministerial post many times, Kusý said.

"SDĽ flirted with the HZDS on several occasions already, and this will be still more real with Koncoš at its head," he said.

Although Koncoš did not identify potential political allies of the SDĽ yet, former party chair Migaš said November 18 after he was asked whether co-operation with the HZDS was likely in the future that "in politics you never burn any bridges and you never say never. That's a normal, legitimate thing."

HZDS' Mečiar said his party was "open for every partner who wants to co-operate and has a real political strength."