Students get interactive on the web

BARDEJOV: In a Vinbarg Basic School classroom in this north-eastern Slovak city, a sign hangs on the wall: 'The interactive classroom will connect Vinbarg Community to the world'.
Today the school is connected. Thanks to a dedicated team of volunteers and a large donation by the US Peace Corps, what was once a barren classroom is now Bardejov's first interactive classroom, complete with two new computers with internet access, a CD player and a copy machine.
"We have created a viable and functioning resource centre which will help students learn more about the internet and the world, and will also help teachers better prepare for their lessons because they now have all necessary materials and resources within their reach," said Jozef Barborík, a Vinbarg teacher. 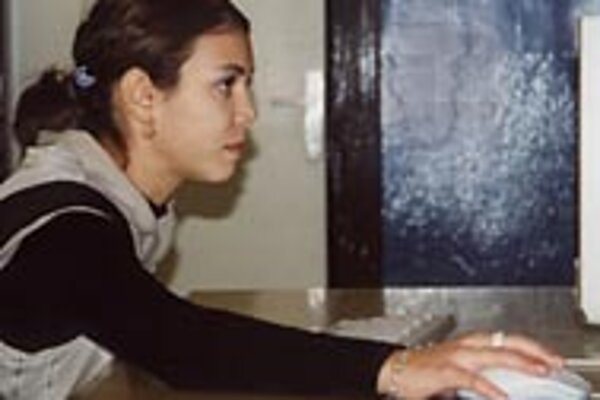 Font size:A-|A+0
BARDEJOV: In a Vinbarg Basic School classroom in this north-eastern Slovak city, a sign hangs on the wall: 'The interactive classroom will connect Vinbarg Community to the world'.

Today the school is connected. Thanks to a dedicated team of volunteers and a large donation by the US Peace Corps, what was once a barren classroom is now Bardejov's first interactive classroom, complete with two new computers with internet access, a CD player and a copy machine.

"We have created a viable and functioning resource centre which will help students learn more about the internet and the world, and will also help teachers better prepare for their lessons because they now have all necessary materials and resources within their reach," said Jozef Barborík, a Vinbarg teacher.

"Students can use the internet now, which was not possible before. And never again will teachers be able to say that they cannot prepare a certain lesson plan because, for example, there's no copy machine. We wanted to get connected and now we are," he added.

The online classroom officially opened October 19. Over the ensuing month, English-language clubs were launched, groundwork for a school magazine laid, and a project aimed at providing students with pen-pals in Oakridge, Tennessee begun.

The American and Slovak students will also study geography and culture together interactively through the internet. "It's just a good idea and a good project," said Peace Corps volunteer Shawn Sample, who with Barborik established the classroom.

"The purpose was to create a resource centre, and to organise teacher conferences in a place where they would have access to resources that will enhance their teaching programmes. Jozef is creating a community of people who can effectively use the internet and the kids are really excited. The English clubs are completely full."

Sample and Barborík devised the interactive classroom as a way to help the city's youth by providing students access to previously unavailable technologies.

Although Bardejov is known for having the best-preserved medieval square in Slovakia (in 1986 it was awarded a UNESCO gold medal for monument preservation), the local economy is severely depressed. The unemployment rate is over 25%; young adults in their 20's are jobless at a nearly 60% clip.

"Shawn and I went out for a beer one day and started talking about ways to help. That's when we realised we could create this classroom," Barborík said.

The two English teachers then secured a room in the Vinbarg school and, with the help of several volunteer students and parents, began renovations. The group plastered cracks in the walls, then painted them blue and white. Carpet was laid and new tables and desks bought. Window blinds and potted plants completed the transformation. Barborík and Sample then bought hardware from a local firm called Focus, which did not offer a discount but agreed to service the computers for free any time in the future.

"When the students came into the room after everything was finished, they couldn't believe it. They said, 'this can't be the same classroom'," Barborík said.

Three weeks after its opening, school director Peter Maslej beamed as students studied English in the interactive classroom. "This is so important for us. Today you have to be connected with the international community and this classroom means that we can finally communicate with the whole world," he said.

Although the school is pleased with the results so far, the project has encountered setbacks. To begin with, a virus infected the computers soon after the October 19 opening. The cash-strapped school has been unable to purchase anti-virus software.

Money is also an issue concerning internet access fees. While the Peace Corps donation covered the cost of renovations and hardware, the school and a parents' committee must pay for monthly fees.

"We have to pay Sk1,200 per month just for access and the students themselves have to pay for the minutes they're online, which is Sk40 per hour. The school has absolutely no money to help," Barborík said. More money is needed, he continued, for monthly expenses, upkeep and expansion - he would like to buy a third computer to satisfy increasing student demand as over half of the school's 1,000 students now use the two computers.

But with no further funding available, Barborík and Sample have been forced to raise money themselves by teaching English for free. Courses cost Sk1,800 per student, with all the money being poured into the classroom. Barborík, who makes just Sk7,000 ($149) a month, could be padding his low salary by teaching English privately, but says the project comes first. "The classroom needs money. It's that simple," he said.

Another problem is internet know-how. Students are allowed to use the computers in their free time only if they can find a teacher who knows how to use the internet to supervise. This requirement has proven harder to satisfy than one might imagine.

"We have 55 teachers and only 11 of them know how to start the internet," Barborík said. "But this is an improvement. Last month, none of the teachers knew how to use the internet."

Which is why teacher conferences are so important. The first conference was held in May, Sample said, with the next one scheduled for December 12. "Each teacher will present a lesson plan in front of the other teachers. Then they will all discuss their methods and share ideas to improve. People are scared to stand up in front of their colleagues, but this is a chance to get better, for teachers to meet and discuss their methods," Barborík said. "The interest level is high, we will have 30 teachers from Bardejov participating in the next conference."

School director Maslej has also embraced the chance to improve. He himself enrolled in one of the English courses, he said, in order to more effectively navigate the internet.

"English is the international language and it's critical to know," he explained. On a personal level, Maslej has family living in Minnesota, so English offers a way to communicate with his cousins. "Plus, I know now what the lyrics to some Beatles' songs mean. I'm very pleased with the results of this classroom," he said.

One thing the school director could do without, however, is the demand of being a student again. "Don't tell the children this," he whispered, "but now I have homework, too."