Mafia trial biggest ever in region

As the trial of reputed Slovak mafia boss Mikuláš Černák entered its second week, the ring of people and companies associated with the case began to widen.
Černák is on trial with eight of his alleged accomplices in the central Slovak city of Banská Bystrica on charges of murder, extortion, kidnapping and tax evasion.
On November 16, the court heard evidence that the Slovak gas pipeline firm Transpetrol had given a guarantee for a 30 million Slovak crown ($731,000) loan taken by Černák's Puchovská Paneláreň firm from the domestic bank Prvá Kreditná Banka. When the Černák-owned company failed to pay even the first installment on the loan, Transpetrol was forced to cover the debt. 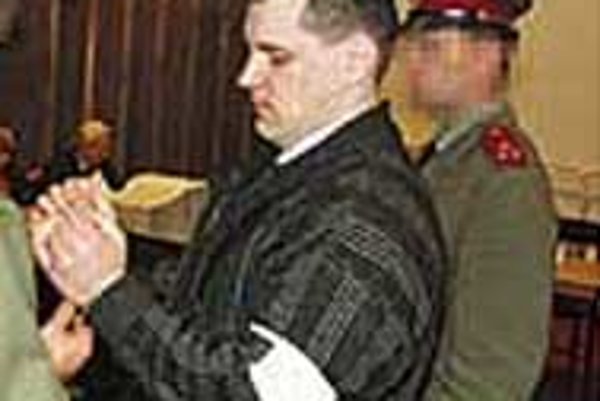 Font size:A-|A+  Comments disabled
As the trial of reputed Slovak mafia boss Mikuláš Černák entered its second week, the ring of people and companies associated with the case began to widen.

Černák is on trial with eight of his alleged accomplices in the central Slovak city of Banská Bystrica on charges of murder, extortion, kidnapping and tax evasion.

On November 16, the court heard evidence that the Slovak gas pipeline firm Transpetrol had given a guarantee for a 30 million Slovak crown ($731,000) loan taken by Černák's Puchovská Paneláreň firm from the domestic bank Prvá Kreditná Banka. When the Černák-owned company failed to pay even the first installment on the loan, Transpetrol was forced to cover the debt.

The name of former Economy Minister Ján Ducký, who was murdered in January, 1999, has also surfaced several times in testimony. Ducký served as head of the SPP state gas utility from April, 1997 to November, 1998; a Transpetrol representative told the court that Ducký had supported the pipeline firm's loan guarantee.

The trial has enormous significance for Slovakia, a country which has had little success in its battle with domestic and foreign mafia groups. According to Daniel Lipšic, head of the Justice Ministry Office, the Černák case is "the largest organised crime trial in central European history. If we are successful in putting these people in jail, it could be a great boost to our fight against organised crime. So far, we have not had many successes in this area."

The Černák trial represents a milestone in the fight against organized crime for the Slovak police as well. However, Police Presidium spokesman Jaroslav Sahúl said that the battle with the mafia was far from over.

"Černák was the boss of the Slovak mafia, but there are many other mafia groups which were not involved with him and which are still active," he said. "The mafia is like a hydra - if you cut off one head, others spring up to replace it."

Security at the Banká Bystrica prison where the trial is being held is extremely tight. Černák was taken from his prison cell in western Slovakia's Leopoldov to Banská Bystrica by helicopter. A police cordon has sealed off traffic around the prison courthouse. Prison guards who live or have family connections to the Upper Hron River area where Černák hails from are not being given guard duty in the cell block where Černák is housed.

"The reason that security is so tight is that the police want to keep witnesses and suspects alive at least until the end of the trial," said Sahúl.

On November 15, exactly one week after the trial began, a hidden witness gave a deposition transmitted to the courtoom by a live television feed - the first time in Slovak history that such a technique has been used.

"Even I didn't know where the witness was," said Ľubomír Samuel, chairman of the jury, following the testimony of hidden witnesses Vladimír R. and his wife Ivana R., the former owners of the Puchovská Paneláreň factory. The witnesses testified that they had been forced to hand over their factory to Černák for a token price.

The hidden witnesses were accompanied during their testimony by one member of the jury and defense attorney Vladimír Lamačka.

Lamačka told the media on November 16 that the secret deposition had taken place in Bratislava. "In the morning I got a phone call telling me where I was supposed to go. From there, I was escorted to a building which was under a police guard," he said.

On November 30, another hidden witness - Vladimír H. - is scheduled to provide testimony accusing Černák of the 1996 murder of Polish businessman Grzegorz Szymanek. According to Interior Minister Ladislav Pittner, Vladimír H. comes from a mafia background and has survived one assassination attempt already, a shooting which left him seriously injured.

"He is now a paraplegic, and we want to make sure that during the trial he won't have to face the suspects in person. The mafia has offered 25 million crowns for his murder," Pittner told the media several days after the trial opened.

Security at the trial has also cramped the media, who are allowed access to the courtroom, but are forbidden to quote testimony directly or broadcast pictures of the faces of court officers. The Czech station TV Nova was banned from the courtroom following the first day of proceedings, after it broadcast pictures showing the faces of police guards.

The centre of attention

Mikuláš Černák rose to infamy in December, 1997, after the Slovak police put out a warrant for his arrest. Černák showed up calmly at the police station in Banská Bystrica, claiming that he was innocent. The police at first did not know what to do with him, but after 40 minutes of deliberation they took him into custody, where he has remained until now.

The process of collecting evidence has been long and complicated. The indictment runs to 181 pages, while the prosecution's file contains more than 6,000 pages. During the trial, more than 50 witnesses are supposed to appear in court. Jury chairman Samuel has estimated that a verdict will be reached in mid-December.

Černák's defence team consists of nine attorneys, including Lamačka, the former chief of the investigation division at the Interior Ministry. Lamačka's participation in the trial has been defended by the Justice Ministry's Lipšic, who said that "we must distinguish between the accused and their defence team."

The prosecution, on the other hand, consists of one attorney - Jarmila Kováčová. Lipšic said that Kováčová had asked for permission to try the case alone, but said he feared that the case could be weakened if Kováčová became ill or otherwise incapacitated.

The first week of the trial was dedicated to the reading of the indictment and the hearing of the nine suspects. During the second week, witnesses were called to provide evidence of Černák's business activities.